While reading the “Downtown East Development: Draft Alternative Urban Areawide Review and Draft Mitigation Plan,” I was again thankful that I never became a practicing city planner. I would have had to spend the majority of my waking hours assembling such tedious, but necessary documents.

This one, which is 88 pages long, not counting appendices, attempts to quantify every possible effect—on the land, the water, the air, the flora and fauna, the traffic and parking—of the Ryan Companies’ proposed $400 million office-retail-residential complex plus park in downtown Minneapolis in which Wells Fargo is to be the principal tenant.

It doesn’t make for riveting reading. While skimming the thing—called the AUAR for short—I fell asleep with it tucked in my arms like a Barbie doll. But you’ll be happy to know that the development’s effects on the natural environment would be minimal. Since downtown east is one of the oldest parts of the city, it hasn’t been natural—except for some scraggly trees planted around surface parking lots—for over a century. Even the birdies will be safe. Ryan pledges that only 40 percent of wall area would be devoted to windows, which should prevent most bird-into-building collisions.

If you’ve forgotten, this proposal covers a five-block area to the west of the new stadium. Offices and apartments would fill the three blocks to the north, and a park spanning Portland Avenue, called The Yard, would lie two blocks to the south. The AUAR considers two scenarios: Minimum Development and Maximum Development. Here’s how they shake out.

If I had my druthers, I would go for the maximum scenario—let’s get this part of town urbaned up, folks!—except that it seems to entail allocating to Wells Fargo one-third of one of the park blocks. I am not against buildings in parks, a discreet restroom, a cafe and/or a merry-go-round, for example, but a Wells Fargo mortgage office? Nosirree.

What came in for some really complicated analyses were parking and traffic volume. Planners estimate that the Minimum Scenario will require 225 parking spots beyond what the development would provide, while the Maximum would need another 1,374. But guess what? In the nearby neighborhood, there are already nearly 21,000 parking spots, 30 percent of which are unused on weekdays.

Estimates of future volume were made more intricate by other changes going on, for example, a narrowing of Washington Avenue from Hennepin to 5th Avenue, construction of a ramp from 4th Street to I-35 northbound, changes in roads by the new stadium and lots of other tweaking that you don’t want to know about.

So how do the options look? Well, here’s a table I constructed using the AUAR’s estimates of LOS (Level of Service) at intersections in the area.

Not to despair. Even if you were for Option 1 as the cleanest and easiest way to create a two-block park, the planners have some mitigation strategies to cut down on delays—for example, eliminating or decreasing on-street parking, adding a lane here, widening a street there.

In the meantime, Wells Fargo has not yet confirmed that it will go ahead with the plan. Reportedly, it would lease 12 stories in two of the office towers, reuniting a large portion of its 12,000 workers who are now scattered across the metro. And that brings to mind the need for yet another analysis: an economic impact statement. If Wells Fargo would be merely moving employees from one part of the city to another, Downtown East might prosper, but we wouldn’t be seeing any net gains in employment—except for the construction work.

Who can afford to live here?

Not surprisingly, people with down-to-earth jobs that need doing—childcare provider, teller and nurse’s aide—struggle to make the rent. The Center for Housing Policy ran the numbers on 76 occupations in 207 metro areas. Below is a chart for 10 occupations in the Twin Cities. Neither a hairdresser nor a retail salesperson with a full-time job could cover rent for a two-bedroom apartment without spending more than the customary third of income on rent. A news reporter can just barely manage. Still, the Twin Cities can brag that its housing is fairly affordable.

Who knew dental hygienists made so much money? 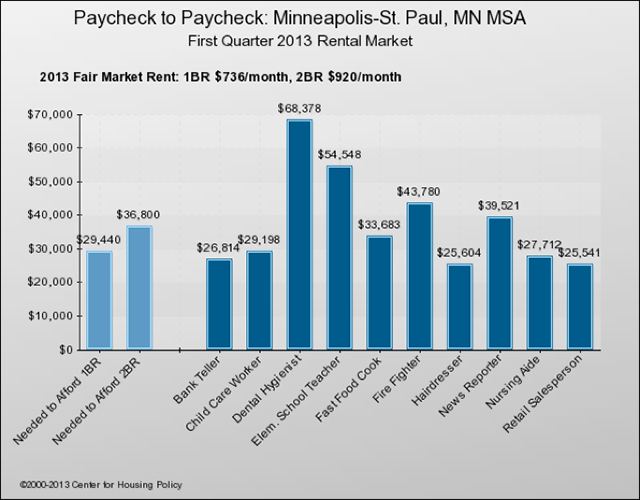 Sorting out the ins and outs of Downtown East