A new illegal drug popular on the party and dance scene in Miami and New York is beginning to infiltrate the Twin Cities.

The drug, Molly, is getting more scrutiny since it was blamed for the overdose deaths of two people at New York City dance festival last weekend.

“Prior to that, the term would come up a couple times a year,” he says. “It is definitely an emerging problem.”

Orozco says Molly can refer to two different drugs: a purer form of Ecstasy, or MDMA, and another synthetic stimulant unrelated to Ecstasy.

Ecstasy is sold in pill form; Molly is a crystalline powder that is snorted.

In both its forms, Molly can be lethal. Overdoses can cause seizures, confusion, increased body temperatures and dehydration.

The Poison Center also is seeing a resurgence in the popularity of Ecstasy, which was prevalent in the 1990s. “So far this year, we’ve gotten as many calls about Ecstasy as in the entirety of last year,” he says.

“That poses a serious threat as a public safety issue,” he says.

Molly “is being marketed as a pure form of MDMA, but on the street God knows what you’re going to see,” Moren says. Users “can overdose and die the very first time they take it. That is the scary part.”

Moren says Molly is manufactured in China and probably in the Netherlands and Canada.

Popular at clubs and raves

Like Ecstasy, Molly makes users feel animated and euphoric and is popular at clubs and raves featuring high-energy electronic music. And like Ecstasy, it is glamorized in pop culture.

Miley Cyrus sings about “dancing with Molly” in her song “We Can’t Stop.” Kanye West’s “Blood on the Leaves” includes the lyrics, “When we tried our first Molly and came out of our body.”

Orozco worries that those sorts of references mean the drug is “reaching a younger age group than it has in the past.” 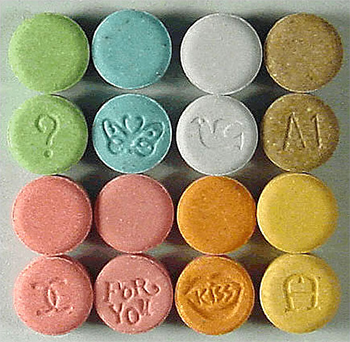 Concern about Molly is growing across the country. A 17-year-old Houston girl was hospitalized last weekend after apparently overdosing on the drug at a music festival in El Paso. Two people recently overdosed at a Boston concert, prompting the city to print educational materials about the drug to distribute to young people.

“The more a drug gains popularity in the world, the more drug users seek it out,” says Carol Falkowski, a leading drug abuse expert here who recently retired from the Minnesota Department of Human Services and previously worked for a decade at Hazelden, the renowned addiction treatment center.

Analysis of Molly in Florida, where so-called club drugs have long been popular, found that it contained one of the active ingredients in “bath salts” — the street name for dangerous designer drugs with effects similar to amphetamine and cocaine, Falkowski says.

“The word on the street is that [Molly] is a recreational drug,” Moren says. “It is obviously very dangerous.”

A 2011 incident in at a party in Blaine illustrated the hazards of consuming a drug that might not be what its seller says it is, he says.

Eleven young people who took a drug that was supposed to have the same effects as Ecstasy actually took a synthetic “research drug’ not intended for human consumption.

All 11 had profound hallucinations and went to an emergency room. One 19-year-old man died. The person who provided the drug that killed his friend was convicted of third-degree murder and sentenced to 10 years in prison.

As they monitor Molly, Moren and Falkowski say the most serious drug problem in the Twin Cities is the intertwined use of prescription drugs and heroin.

Falkowski, who writes a twice-yearly report on drug abuse trends in the area, says abusers of pain killers often turn to cheap, available and alarmingly pure heroin when they can no longer get their hands on prescription drugs.

A national survey on drug use released this week by the Substance Abuse and Mental Health Services Administration found that almost 24 million Americans, or 9.2 percent of the population, use illicit drugs. It also found that heroin use is on the rise.

Other local trends, according to Falkowski’s June report: Cocaine use has been declining for the last five years; methamphetamine abuse — and deaths — are increasing; marijuana was the primary substance problem for 16.3 percent of treatment admissions in 2012, down slightly from 2011.