When it opened in 1968, Nicollet Mall was on the cutting edge of urban design, an instant must-see destination for Twin Cities residents and visitors.

The car-free zone remained a hot attraction for shopping, dining and drinking until the 1990s. A shift of population and retail options to the suburbs — and the Mall of America’s opening in 1992 — diminished shopping options on Nicollet Mall.

In its blueprint for the city’s development through 2025, the Minneapolis Downtown Council says Nicollet Mall “never achieved national status” but “remains Minneapolis’ centerpiece.”

The 2025 plan notes that most of the mall’s energy has moved to its south end, while its northern section is “drab and vacant.”

The mall, the Council says, “needs to be reimagined and refreshed.”

Minneapolis is taking steps to do just that.

At 5 p.m. Tuesday, Sept.  17, at the Guthrie Theater, the city will present detailed plans by three finalists in a design competition that attracted 21 proposals for remaking and enlivening the 12-block transit mall.

So far, the city has released just one artist’s rendering from each of the three finalists’ plans.

It’s hard to get a handle on the full scope of the designs from the drawings, but they all show more trees and other greenery. Food trucks and a market are part of one proposal. There are intriguing lighting options in the renderings.

All of them show lots of people — strolling, shopping, bicycling, sitting at sidewalk cafes.

Nicollet Mall “still makes sense,” says Edward Goetz, director for the University of Minnesota’s Center for Urban and Regional Affairs, but it also makes sense to rethink the space periodically.

“Urban places that are successful change with the times,” he says. “That can happen organically or it can happen as the result of very conscious policy and redesign efforts.”

Goetz says it’s “a good thing” to revisit Nicollet Mall “because it is the core of the downtown.”

At the peak of the trend, about 200 U.S. cities closed a stretch of downtown streets to traffic. Some found that shoppers went elsewhere if they couldn’t park in front of the stores they were visiting and some found that the pedestrian malls became isolated and forbidding, attracting loiterers and crime. 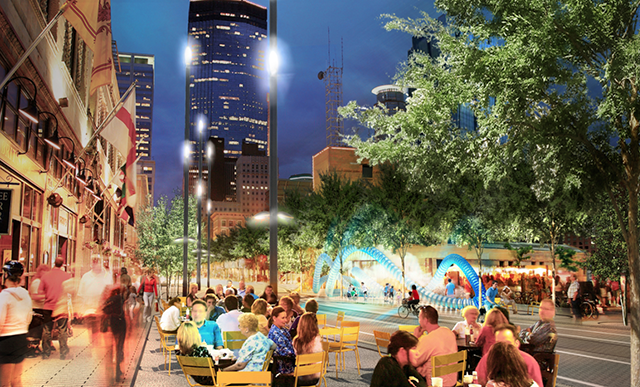 Some cities, including Chicago, Buffalo, Sacramento and Raleigh, N.C., have since reopened their car-free zones to traffic.

Others still are thriving. Denver’s 16th Street Mall, which opened in 1982, is “the number one visitor destination in the metro area and the most important retail street downtown,” says John Desmond, executive vice president of urban planning and environment for the Downtown Denver Partnership.

Like Nicollet Mall, the 16th Street Mall connects with the city’s light rail system, which crosses midway through the mall’s 13-block span. A free shuttle along the mall connects with bus routes at either end.

Configuring transportation access is part of an approach to keeping the mall vibrant that requires ensuring that “planning decisions … reinforce the primacy of the mall,” Desmond says.

So pedestrian links with the mall were a key consideration when a convention center was built downtown in 1990, he says, and effects on the mall are part of the discussion when the city considers capital and urban renewal projects.

The basic design of the 16th Street Mall has changed little, Desmond says, but the addition of more trees, repairs to granite pavers and changes to seating options, trash receptacles, lighting, public art and kiosks are planned. The initial phase of those upgrades is scheduled for next year.

“You don’t want wholesale change unless things are really bad,” he says. “You want to recognize the historic continuum of your city.”

Yonah Freemark, who blogs on transportation issues for thetransportpolitic.com and is an associate at Chicago’s Metropolitan Planning Council, says there’s reason for optimism for Nicollet Mall and other pedestrian zones.

“We’re seeing a reduction in people choosing to drive alone and an increase in people living downtown or taking public transit,” he says. “That means there will be more people waiting for the bus on the street and more people wanting to be on Nicollet Mall.” 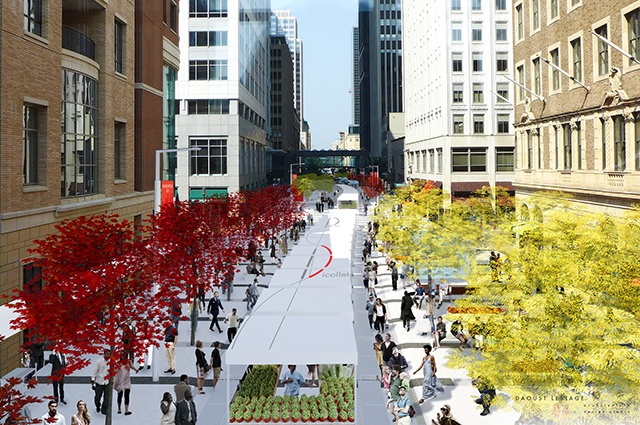 Courtesy of the City of MinneapolisNicollet Mall redesign concept by Daoust Lestage of Montreal.

Freemark, who spends time visiting relatives in the Twin Cities, says a facelift could attract more people to Nicollet Mall. “If you want to get people to enjoy a street, they have to be able to relax in it,” he says, so adding street furniture would be a plus.

Retaining a lively mix of stores, restaurants and bars is vital, Freemark says. “It’s fine to appeal to tourists,” he says, “but Nicollet Mall is the Main Street of the whole region, and the city has to make sure it appeals first to people who live there.”

The Minneapolis City Council will choose among the three finalists for the Nicollet Mall redesign. Then comes the hard part: figuring out how to pay for the project, which could cost as much as $40 million. 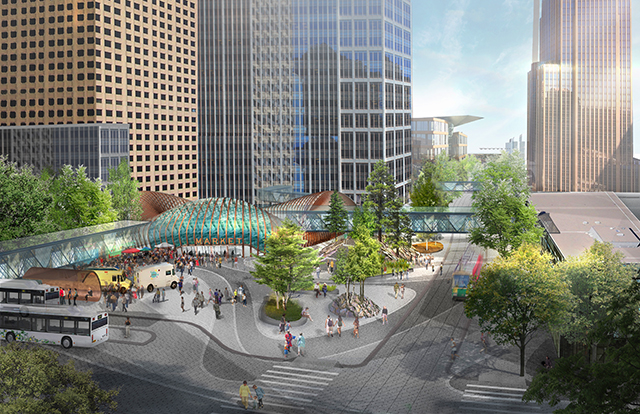 Courtesy of the City of MinneapolisNicollet Mall redesign concept by Tom Leader Studio/!melk.

Rethinking Nicollet Mall: Some ideas to enliven the urban space