We’ve lived in downtown St. Paul for three months now, and we’re getting used to the city’s moods and rhythms.

We love the palpable history, the proximity to the Mississippi, the innovative restaurants, music at Mears Park and the Farmers Market.

After living in downtown Chicago for seven years, we’re still getting used to the empty sidewalks in the evenings and on weekends and the absence of street-level commerce.

Many of the standard urban services—dry cleaners, shoe-repair shops and little restaurants—are on the skyway level, of course.

My husband was unfamiliar with the whole skyway ethos, and when I took him on his first tour, he thought the system, with its narrow hallways lined with small businesses, looked like airport concourses.

When my sister visited us last month from Sturgis, S.D., she decided to take her two middle-school-age daughters for a walk while I prepared dinner.

“Which way should we go to see all the cool shops?” she asked.

“Well,” I replied, “there really aren’t very many downtown. They’re in other parts of the city.” They ended up at the Minnesota Science Museum instead.

I have my own wish list for additions to downtown St. Paul as more people move into condos and apartments and as we await the opening of the St. Paul Saints ballpark in 2015 and the arrival of Central Corridor light rail trains next year.

More on my hopes later. I decided to talk to people who live or work downtown—and know the city far better than this newcomer does—what they like and dislike and what they’d like to change.

A move from Bethlehem, Pa.

Chris Thomforde and his wife moved here in July after he retired from his job as a college president in Bethlehem, Pa.

“We lived in downtown Bethlehem and liked being able to walk everywhere,” he says. Downtown St. Paul, they decided, gives them the same sort of experience.

They like the Ordway Center for the Performing Arts, biking along the river, the museums and the diverse population here.

“I grew up in New York City and I always feel safe here,” he says.

“What we’re frustrated with,” Thomforde says, “is the lack of retail.” They wish they didn’t have to drive to shop for clothing, groceries and almost everything else.

He’s eager for the spring 2014 opening of Lunds grocery at 10th and Robert. “That will be terrific,” he says.

Thomforde only recently got his first glimpse of the skyway system and hasn’t really explored it yet. He saw a sign for a Caribou coffee shop and wandered into the skyway when he couldn’t find it at street level. 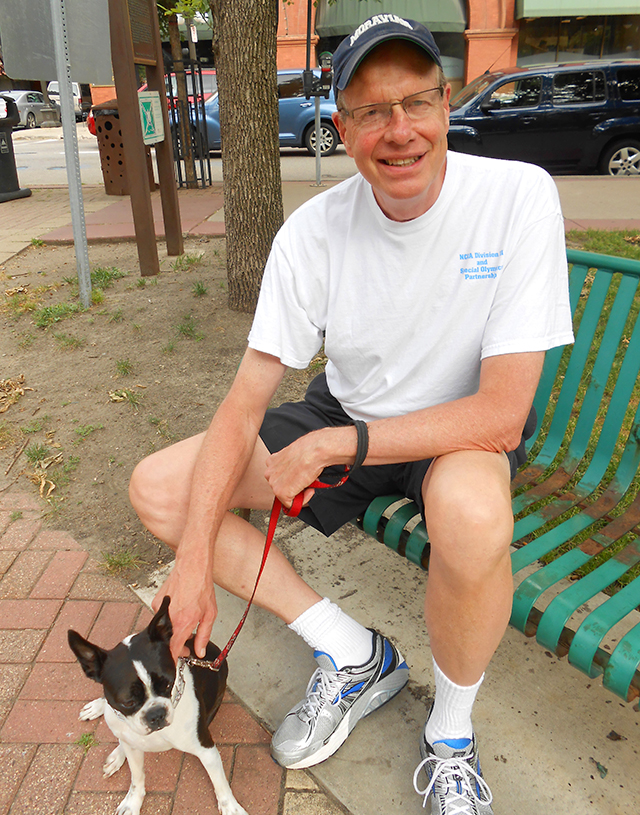 MinnPost photo by Judy KeenChris Thomforde: “What we’re frustrated with is the lack of retail.”

Maureen Murphy has worked downtown for the state government for 12 years and has watched St. Paul evolve.

“The parks are fabulous,” she says. “I love the skyway. I hate that there’s no place to shop.”

She remembers when the downtown Macy’s store, which closed in March, was a Dayton’s and still laments its demise.

Add Doug Thompson to that list. He opened Metropolitan Watchworks on a prime spot near a skyway food court last November and wishes Macy’s were still around or that Target would open a downtown store. More shoppers mean more foot traffic and more potential customers for his business, he says.

“Something like a Super Target would be huge,” he says. “It would help the 40,000 people that work downtown, too.”

Chad Walstrom, who has worked downtown for a computer company for four years, likes St. Paul’s vibe. “It has a bit of a closer-knit feel than Minneapolis,” he says. “It’s more comfortable.”

Still, he says, “I would never live downtown.”

Why not? Walstrom says he hates the confusing parking rules and doesn’t like the city’s school system.

Evelyn Carey, on the other hand, is a true believer. She and her husband moved to Lowertown more than nine years ago from Minneapolis’ Uptown neighborhood.

“We fell in love with a building that was being renovated,” she says. “Our kids were grown and we wanted a new adventure. … And part of the reason we moved was smelling the basil in the Farmers Market.”

Their friends in Uptown, Carey says, all thought, ‘What are you doing?’”

The Careys were part of the first wave of downtown residents; the city estimates that about 10,000 people now live in the area. She’s a little concerned that the Saints’ stadium will alter the neighborhood’s character by attracting more bars.

OK, back to my St. Paul to-do list. More shopping would be great: I wish there were antique stores like those on 7th Street West. Boutiques like those clustered at Selby and Snelling would create more energy.

I wish there were more reasons for the people who turn the skyway into a human freeway at midday to hit the sidewalks instead. And I’ll be thrilled when there’s a decent grocery store in walking range.

That said, I’m already a little protective of my St. Paul neighborhood.

There’s a reason I chose not to live in downtown Minneapolis.

A wish list from loyal downtown residents in St. Paul