On many blocks that were in the path of the tornado that plowed across North Minneapolis on May 22, 2011, there are few signs of the storm’s destruction.

Instead, there are rebuilt homes, new roofs and growing trees that replaced the thousands that were toppled.

A closer look, though, reveals scars still visible 29 months after the tornado, packing 125-mph winds, bisected the neighborhood from the southwest to the northeast.

There are vacant lots where homes once stood. Damaged trees still loom precariously in some yards. And the city still is dealing with 234 damaged, abandoned or condemned properties across the area, according to a report released last week by the Minneapolis Community Planning and Economic Development Department.

‘No money or don’t care’

The city will trim or remove heavily damaged trees on private property where owners “either have no money or don’t care” about the problem, she says.

Johnson also says each of five neighborhood associations will get $35,000 to help city staff identify and deal with the remaining problem properties. About 3,700 properties were damaged by the tornado; almost one-third of them were rentals. The latest city tally includes several cases where the city has been unable to contact owners and some that are in foreclosure or on tax forfeiture lists.

In general, Johnson is pleased with rebuilding efforts and the city’s “substantial investment” them. “You can feel, as I do as I drive around, that things look better,” she says. “I’m really pleased with how some of the blocks have come back.”

North Minneapolis residents, she says, “pulled together” and “are really proud of how things look.”

Working together to spur the rebound, Johnson says, “definitely brought people together.” 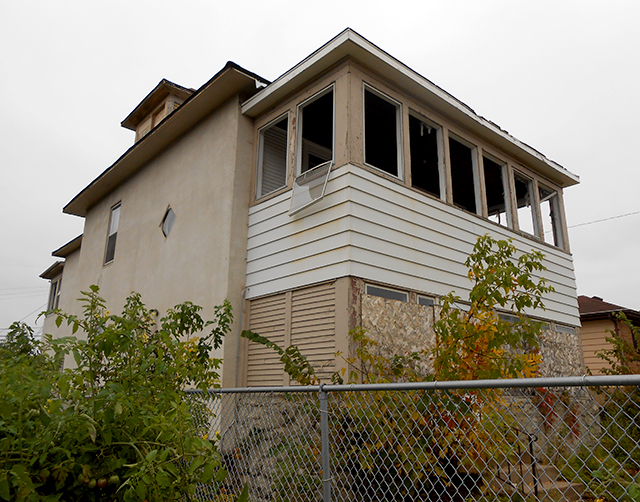 MinnPost photo by Judy KeenThe city has been unable to contact the owner of this damaged, vacant home on Fremont Avenue North.

Maybe so, says Mary Peters, whose rental house was damaged by the storm, but the neighborhood still has problems that were not caused by the tornado.

“We’re still perceived as a high-crime area,” she says, “and so many people pass through here, renting for a short time and then moving on, that there isn’t really a strong sense of community.”

Lisa Dunlap, who lives and works in North Minneapolis, says “there’s still some struggle” in the neighborhood, but she hopes that the shared – and ongoing – recovery process “is building relationships and trust.”

The Sanctuary Covenant Church became a hub of relief efforts in the immediate aftermath of the tornado and for weeks afterward.

People and companies dropped off water, food and other supplies at the church. The church, like the rest of the neighborhood, had no power, so it set up a row of grills outside and prepared food.

Church members knocked on doors in the area to check on residents and continued to visit the elderly and the ill to make sure they were OK in the days that followed.

Humanity and generosity, says church Elder Mark Aamot, “definitely came out in the wake of the tornado.”

So did the uglier side of humanity. Someone broke into the church one night and stole office items. 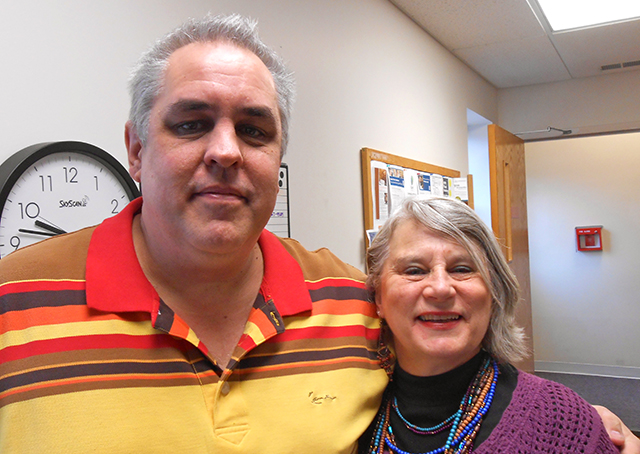 MinnPost photo by Judy KeenElder Mark Aamot and office manager Cheryl Anderson of the Sanctuary Covenant Church in North Minneapolis helped organize relief efforts after the 2011 tornado despite damage to the church.

Church office manager Cheryl Anderson says she’s still in touch with some of the people she met because of the tornado. “It brought us outside our building and into the community,” she says.

A vacant lot created when a house destroyed by the tornado was torn down is now a community garden created by Sanctuary Covenant.

Both Anderson and Aamot live in the area targeted by the storm. Neither thinks their neighborhood is fully recovered.

“There were issues in North Minneapolis before the tornado and the tornado exacerbated them,” Aamot says. There’s less housing stock, he says, and higher rents in the properties that remain.

There are squatters in some tornado-damaged buildings that are boarded up and unsafe for occupancy, he says. For some of those people, homelessness might be the only other option. “Some kind of roof is better than no roof,” he adds.

City analyses conducted after the tornado found that more than three-quarters of people affected by the tornado were receiving public assistance.

Retiree Jerry Johnson lost a tree to the tornado but his house was undamaged. He has lived in North Minneapolis for almost 25 years and says it has become more diverse, but he’s close to neighbors who also have made it home for decades.

Despite the area’s old challenges and the new ones created by the tornado, Aamot agrees.

“There are people in North Minneapolis who never make the 10 o’clock news that work and raise their families that are great people,” he says. “They are the core of this community.” 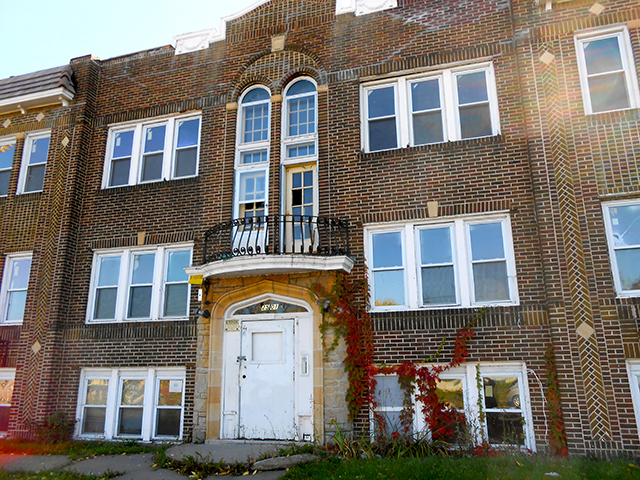 MinnPost photo by Judy KeenThis vacant apartment building on Golden Valley Road is being evaluated by the city after its owner failed to repair tornado damage.