In 1950, the population of Minneapolis was 521,718. It was the 17th largest city in the United States, with more people than Dallas, Denver, Miami or Seattle.

Mayor R.T. Rybak thinks so. In his August budget speech, he said Minneapolis should aim for a population of 500,000 by 2025, an increase from the 450,000 goal he set in his State of the City speech in April.

At a forum last week on urban design and development, several candidates who are vying to succeed Rybak also endorsed the 500,000-by-2025 goal.

The mayor said in his budget speech that the half-million benchmark is about more than bragging rights. The larger the population, “the more people there are to support strong schools, shopping districts, restaurants, art groups” and other amenities, he said.

“Equally importantly,” he said, “more people living in Minneapolis means that more of us share the costs of running a city: When we split the costs of police, firefighters, roads and water with more people, each of us pays less.”

Can it be done?

That translates into a reduction in property tax burdens. Sounds good, doesn’t it? But how realistic is Rybak’s goal?

In September, the Metropolitan Council released preliminary population projections for 2040. It figured Minneapolis’ population 27 years from now will reach 487,700.

If the economy stays strong and Minneapolis continues to grow, says Metropolitan Council demographer Todd Graham, the city could add 20,000 housing units and be home to 450,000 people by 2025. 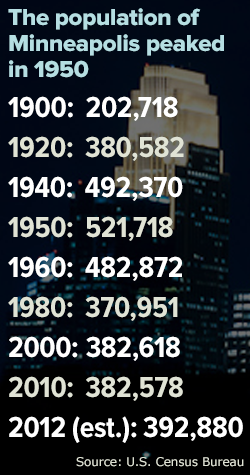 The city has experienced a strong rebound from the Great Recession and has experienced “substantial growth” of more than 10,000 residents since the 2010 Census, Graham says.

A building boom in downtown apartments and falling rental vacancy rates are feeding that gain, he says, but those factors can’t be counted on to be permanent trends.

For any city that wants to grow, Graham says, “the biggest challenges are can you find the land, can you build and can you find a market demand for what’s being built.”

At last week’s mayoral candidate forum, there was general agreement that Minneapolis’ expanding transit options, including light rail and a proposed streetcar, will attract newcomers who want to live in the city but don’t want to drive — and draw developers who will build housing along those transportation lines.

“We think we are seeing a shift in real-estate preferences by people looking for housing,” Graham says. More younger people and seniors want “central locations and accessibility to work and things to do.”

Ironically, changes in transportation fueled Minneapolis’ population drop after it peaked in the 1950 census. The metro area’s two main conduits, Interstate 35 and Interstate 94, were built in the 1960s, helping to lure people from the city to the suburbs.

Analysis of census reports by the Population Reference Bureau shows that the United State’s biggest cities are experiencing growth rates that exceed the national average.

The 10 largest cities are New York, Los Angeles, Chicago, Houston, Philadelphia, Phoenix, San Antonio, San Diego, Dallas and San Jose. They represent 8 percent of the country’s total population. After net population declines between 2003 and 2005, they were responsible for more than 11 percent of U.S. population growth from 2011-2012.

Giant jumps in population are possible, but often are a result of singular circumstances. New Orleans’ population has grown 28 percent since 2007 to 369,250. That’s about 81 percent of its population before the city was decimated by flooding in the aftermath of Hurricane Katrina in 2005.

Detroit, on the other hand, is the poster child for population loss. In 1950, it was the nation’s fifth largest with city 1.8 million residents. Census estimates for 2012 put the population now at less than half that number — 701,475. 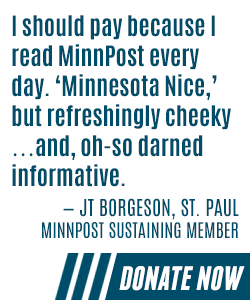 “Minneapolis would have to sustain a 2-plus percent annual growth rate to come close to reaching 500,000 in 10 years,” Frey says. “Right now, the only cities doing that are in rapidly growing Sunbelt cities like Austin or Charlotte, and they are also located inside rapidly growing metro areas.”

Still, Frey says Minneapolis has clearly rebounded from a period of declining population and has the potential for further increases.

“The growth would be especially useful if it included a mix of professionals, retiring boomers with disposable incomes, but also young people willing to raise their children in the city – leading to stable neighborhoods,” he says.

Rybak, mayoral candidates set Minneapolis population goal of 500,000 by 2025 — but is that realistic?