Is it time to pull the plug on the Southwest Corridor light-rail line? Or is it already unraveling in slow motion?

After more than a decade of debate, there’s still no consensus on the route, and the $1.55 billion project was postponed when Gov. Mark Dayton last week called for a delay of up to 90 days so more studies can be conducted and more alternatives considered.

The decision to kick what was an imminent vote down the road is raising questions about the project’s viability, the availability of federal funds and future political implications.

It’s not easy to discern a resolution to the dispute at the heart of the postponement.

Minneapolis opposes current plans for construction of two shallow tunnels next to freight rail and bike trails in the city’s Kenilworth corridor. Opponents say light-rail trains would be above ground for too long, disrupting bicycling and other recreational activities. Trains would emerge from tunnels to cross a bridge over a channel between Cedar Lake and Lake of the Isles.

Minneapolis has for years endorsed light rail at grade level in the Kenilworth corridor in exchange for the rerouting of its current freight-train traffic.

After meeting with suburban officials on Tuesday, Dayton said he wants to find a way to reach consensus among the cities that would be served by the line.

Dayton and Rybak both say they want the project to proceed. Rybak says he won’t allow the project to harm the Chain of Lakes. Dayton says everybody needs to “take a deep breath” and work toward a plan that Minneapolis can live with. Without its support, he says, chances of the project making it through the Legislature are “slim to none.”

So the Metropolitan Council, which is overseeing the project, will study the tunnels’ environmental impact and consider alternatives before a final decision is made.

Are we back to square one, with all options on the table?

Hennepin County Commissioner Mike Opat hopes not. “I’m satisfied that there’s been enough evaluation of all the realistic options,” he says.

If debate drags into 2014, he says, the issue will be in the hands of a new Minneapolis mayor and City Council – and who knows what their stance will be?

“Either we’ll accept this solution or something that looks close to it and move on,” Opat says, “or the project would be put on hold indefinitely, I guess. I certainly hope that doesn’t happen.”

But if there’s no consensus six months or so from now, he says, and the Metropolitan Council is unwilling to settle on a plan without the unanimous support of affected communities, he’d consider shifting attention to other projects, including the Bottineau Transitway. 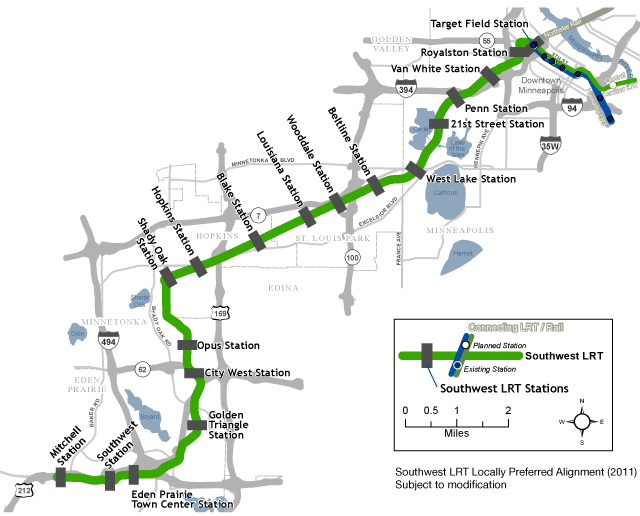 Jake Spano, a St. Louis Park City Council member, says he’s still optimistic but is concerned that additional Southwest Corridor delays could cost the project its “place in the queue” for federal funding and “would have a chilling effect” on funding prospects for other metro area projects.

That’s a valid concern, says Laura Baenen, spokeswoman for the Southwest LRT Project. “What we do know and have said repeatedly is that this project is in line with other projects for federal funding and that significant delay can put us at a disadvantage compared to other projects,” she says.

Spano believes a solution still is possible, and he says it might not have to be a unanimous one.

The Metropolitan Council, he says, is required to seek consent of the cities along the proposed light-rail line, but “not to actually get their consent.”

“At some point,” Spano says, “people are going to have to make a decision about whether or not the project wants to go forward.”

Cheryl Youakim, a member of the Hopkins City Council, thinks a resolution is within reach. “I definitely do not think we need to go back to square one,” she says. “We just have a little work to be done to make sure all the stakeholders have all their questions answered.”

Jami LaPray, co-chair of Safety in the Park, a nonpartisan grassroots group in St. Louis Park that opposes rerouting freight traffic, still has plenty of questions.

She wonders if the latest delay means long-ago discarded route options, such as an old plan to run the line through Uptown, will be reconsidered. It’s unclear so far, she says, whether relocating freight trains is the sole idea being reassessed.

“We’re disappointed with the process at this point,” she says, “and we’re concerned about how it’s going to move forward.”

Todd Klingel, president of the Minneapolis Regional Chamber of Commerce, says there’s no reason for despair.

These sorts of “near-death experiences” come with the territory, he says. “The project is as important as ever and it will happen.”

Klingel, who supports the tunnel proposal, expects the new environmental studies to show that water quality won’t be negatively affected and the project will soon be back on track. He adds a caveat, however: A finding that water quality would deteriorate, he says, “would be an insurmountable impediment.”

He believes there’s general agreement that the Southwest Corridor project is critical to the area’s future.

“We need to be thinking about the long-term viability of the region,” he says, “and infrastructure of this type is essential.”