A single mother of two, Mwamasika, 45, has an accounting degree and is refreshing her computer skills while she looks for a job.

She’s a regular library visitor with her children, and a day earlier she was at a different public library, learning to fill out online job applications.

“There’s a lot at the library,” she says.

She’s right. If you still think of libraries as places where rows of shelves hold dusty books, you’re missing out. And they’re not always very quiet anymore, either.

To ensure that they remain relevant in the digital age, public libraries have added e-books and other digital resources, free access to computers and wi-fi, homework help for students and classes in genealogy, yoga, Anishinaabe bead arts, manga (Japanese comic books) and dozens of other topics.

Out of the buildings

Libraries also are busting out of their buildings and taking free services into Twin Cities neighborhoods.

The St. Paul Public Library system operates a mobile computer lab that provides computer training and job-search help — in English and other languages, including Spanish, Hmong and Somali.

“Our brand is books, but really what we would like people to start thinking about more is learning,” says Rebecca Ryan, who as library community services coordinator managed the mobile lab. The idea behind the project, she says, was “to go where the people were.”

Ryan, now the manager of St. Paul’s Sun Ray Library, says that once people are exposed to libraries’ array of services, they’re more likely to visit an actual library.

In St. Paul, the people who teach classes in other languages in the mobile lab arrange to be at a library during a specific time frame so first-time visitors are greeted by a familiar person who speaks their language.

There were 2.3 million visitors to St. Paul libraries last year, up from 1.9 million a decade earlier. Sun Ray is bringing cultural programs to senior apartment complexes, Ryan says. A flamenco performance was among recent events.

Libraries across the country saw increases in usage during the recession that began in 2008. People who had lost jobs were seeking access to computers to upgrade their skills and hunt for new employment. Tight budgets meant fewer people were buying their own computers, books and movies and all were available at libraries without cost.

Libraries also have adjusted to the shift to digital books, newspapers and online databases and other research tools.

“Libraries remain open to innovation and change in order to remain relevant and useful to the communities they serve,” says Kristen Mastel, president of the Minnesota Library Association. “Libraries are labs for collaboration and innovation.”

Among topics discussed at an association conference last week in St. Cloud, Mastel says: ways librarians can work with social workers; Hennepin County libraries’ At Home service, which delivers or mails books to the homebound; and the addition of a meditation room to the Minneapolis Community and Technical College Library.

A 2012 study by the Pew Research Center found that 80 percent of Americans think loaning books and reference librarians are “very important” services. Free access to computers and the internet is very important to 77 percent.

The survey found demand for even wider uses of technology, including online research services, apps-based access to library materials and programs and GPS navigation apps to help patrons find materials inside libraries.

A library in San Antonio Texas, has gone all-digital. The Bexar County Digital Library, also known as BiblioTech, has e-books, e-readers, computers, iPads and laptops — but no books.

“They will continue to evolve,” she says. “They are a method by which we shape and define culture and ideas. I don’t see them going anywhere.” 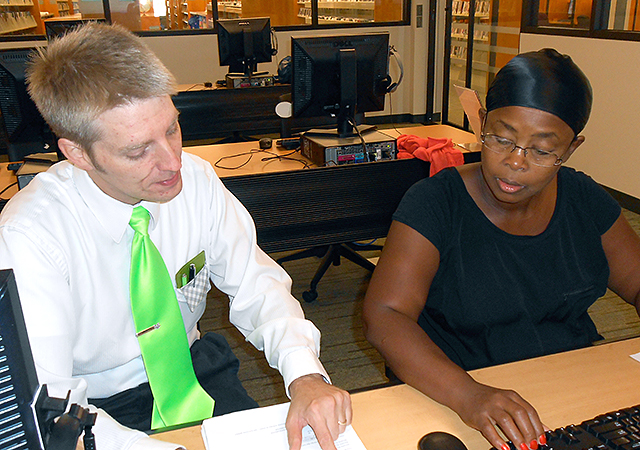 But libraries must change, Turner says. For example, Hennepin County libraries have been using social media such as Facebook and Twitter to connect with library users for five years.

“That’s where our patrons are,” she says. “Just like you can ring us on the phone … you can chat with us online.”

Visitor numbers also are up at Hennepin County libraries, she says.

She loves classes, such as “Senior Surf” computer lessons, that connect people with new technology. At the other end of the age spectrum, iPads are used during children’s story times to tap into interactive apps.

Pierre Bottineau is always thinking of new ways to attract patrons. A jewelry-making class for teens is coming up later this month.

Still, it’s gratifying to see that even young patrons still have an affinity for books, Ramstrom says.

“I had a group of sixth graders today who went home with stacks of books,” she says. “Two girls had the same reaction: They liked the way the books felt. I thought that was so great.”

The disappearance of the hushed silence and the stereotype of a librarian hissing “shhhh” are among the many changes at your local library.

Turner says many libraries designate quiet spaces. “But the kinds of learning and working and playing that go on,” she says, “are not always quiet.”