I consider myself a pretty good driver.

I’ve driven in Manhattan and Los Angeles. I lived in downtown Chicago until this June, forcing me into regular encounters with the dreaded Kennedy Expressway.

In my four decades on the road, I’ve never been in an accident and I’ve gotten just one speeding ticket. Which I didn’t deserve.

Since moving to the Twin Cities, I’ve tensed up behind the wheel every time I’ve had to navigate in heavy traffic what traffic engineers call a weaving lane — the short section of pavement shared briefly by vehicles entering and leaving a freeway.

I had to deal with them in Chicago, too. Many freeways and highways and most cloverleaf interchanges have them.

If you’re trying to get off the freeway, you maneuver to the right as you approach the exit ramp, slowing down. The problem is that these ramp approaches also are occupied by vehicles trying to enter the freeway. They’re speeding up as they prepare to join the main flow of traffic.

So you squeeze in behind or, worse, in front of a vehicle that’s accelerating as you’re decelerating. When traffic is congested, you often have to slow way down while you’re still on the freeway, waiting for a chance to weave into the shared lane.

When you’re entering the freeway during rush hours, you sometimes have to come to a complete stop on that shared bit of road before you can safely slide into fast-moving traffic.

The process can be stressful and frightening, especially when other drivers won’t cooperate by letting you edge out of or into the weaving lane.

Jim Rosenow, design flexibility engineer for the Minnesota Department of Transportation, says short weaving sections exist in most big cities and the worst ones date from the late 1950s and 1960s, the early days of freeway construction.

Back then, he says, “the operational and safety effects of closely spaced ramp junctions weren’t as well understood as they are now.”

What Rosenow calls “possibly the most notorious” weaving lane in the Twin Cities is between East 35th Street and East 31st Street along Interstate 35W. It was built in the mid-’60s.

The first road design criteria to ensure adequate ramp junction spacing appeared as a research paper in 1975, he says, and became part of national design guidance for new construction in 1984.

“It’s difficult to improve ramp spacing on existing highways — even when we do full reconstruction of the road — because that generally means eliminating interchanges, and it’s pretty disruptive and unpopular to eliminate interchanges,” Rosenow says.

And the spacing guidance doesn’t apply to cloverleaf loops, “basically because it would be impossible to space the loops that far apart within the constraint of an interchange.”

Wenlong Jin is an assistant professor of civil and environmental engineering at the University of California-Irvine’s Institute of Transportation Studies. “Safety is the No. 1 reason we want to avoid this kind of design,” he says. That’s not the only issue. Weaving lanes contribute to bottlenecks and can increase fuel consumption and vehicle emissions by up to 30 percent, he says.

Ramp meters that control the flow of traffic can help, he says, and some European countries vary speed limits along freeways to slow traffic approaching off- and on-ramps.

“If many people can slow down before getting to the weaving area, that helps,” he says.

“Collaborative driving could be really useful in this case,” Jin says, and he’s working to develop smart phone apps that would allow vehicle-to-vehicle communication to convey to nearby drivers information about a vehicle’s planned movements.

His practical advice for drivers: “When you get to this weaving area, even if you are not getting off or getting on, you can still anticipate a lot of lane changes. You want to stay away from the right lane.”

“At least in the Twin Cities,” he says, “none of the top 10 crash sites on freeways is on a cloverleaf.” 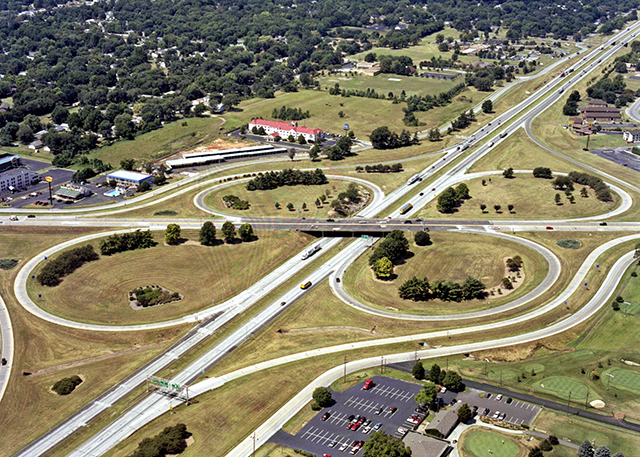 Courtesy of MoDOTThere are design alternatives to the cloverleaf and its weaving lanes, Hourdos says, but most require a lot more space and bridges and some are much more expensive.

There are design alternatives to the cloverleaf and its weaving lanes, Hourdos says, but most require a lot more space and bridges and some are much more expensive.

Rosenow says alternatives have been built here. The most common is the collector-distributor road – a separated roadway from which all entrance, exit and weaving maneuvers are done. “It exits the main highway ahead of the congested area and re-enters downstream of it,” he says.

They work, he says, but cost more because of the need for extra pavement, lateral space for the extra roadway and a longer bridge.

Another option is to overlap short entrance/exit ramp spacing with what’s called a bridge braid. The off-ramp and on-ramp are built over or under each other. Examples: Plymouth, where the eastbound I-394 exit to Ridgedale Drive bridges under the eastbound entrance ramp from Plymouth Road; and along southbound Highway 252 as it passes under I-694 in Brooklyn Center.

“Anything that requires the construction of a bridge is relatively expensive and can be difficult to cost-justify,” Rosenow says.

Then there’s the “buffer lane” design, which was invented here a decade ago. It works like a collector-distributor road but is built as an auxiliary lane alongside the main highway, not a separate roadway.

Its price tag is lower than some other alternatives and it can be retrofitted in existing interchanges. Rosenow says this innovative approach probably will be included in the next national highway design guide.

I asked Rosenow for some driving advice, too.

“Do your best to equalize your speed with the traffic stream you’re trying to weave with,” he says, and use your turn signal.

A research team that studied freeway ramp driving behavior found that the biggest problem comes when you’re merging from a low-speed ramp onto the highway. Resist the temptation to merge into highway lanes early and at a low speed, he suggests.

“I understand that this is due to a desire to get in there while the getting is good,” he says, “but it can tend to create a shock wave on the highway.”

Why driving Twin Cities’ freeways can be harrowing