Love ’em or loathe ’em, roundabouts are here to stay.

The alternatives to standard intersections controlled by stop signs or lights slow traffic as it flows in one direction around a central island to several exits.

There are about 120 in use on state, county and local roads around Minnesota, says Jim Rosenow, design flexibility engineer for the Minnesota Department of Transportation, and about 30 more are being built or are in the design phase.

He likes roundabouts and thinks Minnesota drivers are getting accustomed to them. “Now that I know how much less delay is involved with roundabouts compared with signals,” Rosenow says, “I have a hard time sitting at a signal waiting for a colored light to tell me what to do.

“In a roundabout, if you can go, you go. They’re very simple and efficient.”

Rosenow notes that safety also is enhanced at roundabouts because there are no red lights for vehicles to run and because reduced speeds reduce the odds that pedestrians struck by cars are fatally injured.

“Roundabouts have emerged as a holy grail of sorts: an intersection form that processes a lot of traffic and improves safety.”

Roundabouts originated in Great Britain and over the past decade have become increasingly popular across the United States. Traffic engineers consider them safer and more efficient than standard intersections and better for the environment because they require less idling at stop signs or lights.

The Insurance Institute for Highway Safety says studies of intersections converted from traffic signals or stop signs to roundabouts found reductions of up to 80 percent in injury crashes and 35-47 percent decreases in all crashes.

Rosenow says MnDOT is conducting a comprehensive study that will compare safety before and after roundabout construction, but the safety benefits already are clear.

“One of the reasons we’ll continue to build more is that we know there are quite a few people walking around today who wouldn’t otherwise be if it hadn’t been for roundabouts, and that’s a good feeling,” Rosenow says. 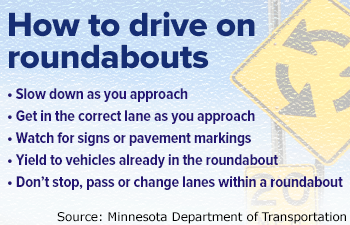 “They do work,” says Washington County traffic engineer Joe Gustafson. “Obviously opinions on them are varied among drivers, but they have been shown to be very good at reducing delay and also preventing fatal and injury crashes.”

Studies in Washington County found that afternoon rush-hour drivers made it through roundabouts in 58 percent less time than drivers on roads with similar traffic volumes that control intersections with signal lights, Gustafson says.

The Woodbury area has about 10 roundabouts and plans for more, says Klayton Eckles, the city’s engineering and public works director.

“They’re an excellent alternative to a four-way stop sign,” he says. “If you put them in the right location, where somebody was going to have to stop anyway or likely stop, you reduce travel time, driver frustration and fuel consumption.”

Roundabouts can be a little intimidating for drivers encountering them for the first time, Eckles says, particularly on more complex versions where two four-lane roads intersect, requiring more than one lane circling the center island.

Because of a rash of minor fender-benders, Woodbury’s busiest roundabout, at Radio Drive and Bailey Road, was recently modified. Now the road with lower traffic volume enters and exits the roundabout in single lanes. “That cuts conflict points in half,” Eckles says.

Roundabouts work best at intersections where the volume of traffic on both roadways is comparable, Rosenow says, and are less effective in hilly locations and at places where traffic tends to back up, such as near railroad crossings.

Rosenow says Minnesota’s first modern roundabout was build at the intersection of Frost Avenue and English Street in Maplewood. It opened in October 2002. The first one on MnDOT’s system, at the Medford interchange off Interstate 35 South, opened a month later.

The latter roundabout saved more than $500,000 in construction costs compared with traffic signals, Rosenow says, but in general roundabout construction is comparable to the price of signalized intersections. 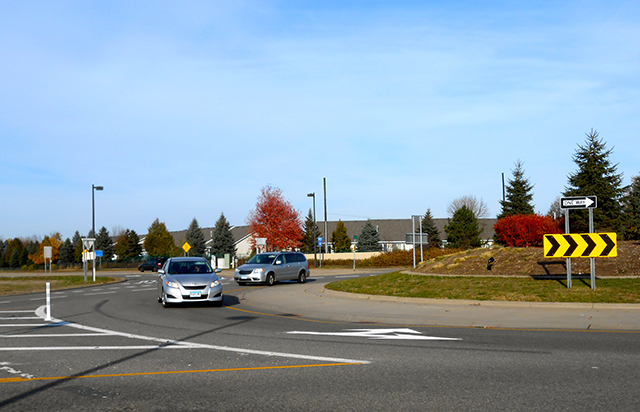 MinnPost photo by Judy KeenA roundabout at the intersection of Radio Drive and Bailey Road in Woodbury.

Some communities resist roundabouts. A few years ago, Forest Lake residents objected to a roundabout proposal. Last month, the San Marcos, Texas, City Council scrapped plans for a roundabout in response to citizens’ complaints. Commissioners in Benton County, Ore., could decide this week whether to proceed with a controversial roundabout proposal.

Gustafson says it’s more difficult to persuade drivers of the benefits of roundabouts if they’ve never driven them, but most drivers end up liking them.

That’s what happened with Pam Callaway. She moved to the Woodbury area a couple months ago from St. Louis and says that, at first, driving through roundabouts “freaked me out.”

“I was never quite sure when it was safe for me dive in there,” she says. “Finally I figured out that everybody in the roundabout is driving pretty slowly, so when there’s an opening it’s usually safe to enter.”

Now that she’s accustomed to them, she’s a fan – except for one gripe.

“I feel like I’m spending less time sitting at red lights, which is good,” Callaway says. “But I get frustrated with other drivers who haven’t learned yet how to navigate them. They tend to sit forever waiting for all cars in the roundabout to disappear before they dare to enter. Drives me nuts.”

Roundabouts are here to stay — and for good reasons