“Five, four, three, two, one, shovel!” By turns, notables, a dozen at a time, donned purple hardhats, grasped gold-plated (well, gold-painted) shovels and dug into what looked like a grave for the Jolly Green Giant. The Vikings Sköl Line Drummers provided a marching beat, and fireworks exploded above in the damp, bone-soaking mist.

Fans and officials who gathered Tuesday morning to witness the groundbreaking for the new Vikings stadium, due to open for the 2016 football season, were jubilant.

After so many years of talking about getting it built and then seeing the project die, come to life and then die again in one legislative committee after another, lurch from downtown Minneapolis to Hennepin County to Arden Hills and back to Minneapolis, having its revenues from electronic pull-tabs fall far short (like 100 yards short) of funding goals, run into problems with grasping nearby landowners, wobble on a New Jersey court’s disapproval of the business practices of team owners Zygi and Mark Wilf and bump into cost overruns before construction even began, stadium supporters had to be pinching themselves to make sure that they weren’t dreaming.

But it was the most real of reality shows. HKS, the architects, had produced a real plan, one that has evoked grudging praise. Mortenson Construction is under contract to build the thing. The Legislature has provided back-up financing. The Minnesota Sports Facilities Authority has declared the Wilfs solvent enough to foot their share of the stadium bill and worked through lease agreements and land purchases.

The Vikings have, after some fussing, made a deal with the University of Minnesota to play at TCF Stadium during the two years of construction — and, at the last minute, added another $41 million in funding, according to Gov. Mark Dayton, to pay for extras that didn’t fit in the budget — for five pivoting glass doors and HD video boards.

‘I can’t believe we won’

“I feel a little bit like coach Frazier after the game on Sunday,” said Dayton, speaking to the crowd at a ceremony inside a heated tent before the groundbreaking. “I can’t believe it’s over, and I can’t believe we won.”

A parade of officials and Vikings personnel lavished praise on each other for their hard work in making it all happen. If you drew lines from each person to the people he or she thanked, you’d wind up with something that looked like an explosion in a spaghetti factory.

Michele Kelm-Helgen, head of the Minnesota Sports Facilities Authority, thanked her board members and the Wilfs.

Rybak continued the blandishments: “Whenever you hear my name in this context, you should spell and pronounce it differently; it’s pronounced ‘R.T. Rybak and Council President Barbara Johnson,’ ” he said. “Those names should never be disconnected because from the very beginning, the council president was a remarkable, remarkable leader with this.”

Rybak also thanked members of the City Council who agreed to go along with a shift of $150 million in city hospitality taxes to the stadium, even thanking his successor, Mayor-elect Betsy Hodges, who had been a vocal stadium opponent.

Dayton finished off the speeches, thanking everybody that everyone else had already thanked. 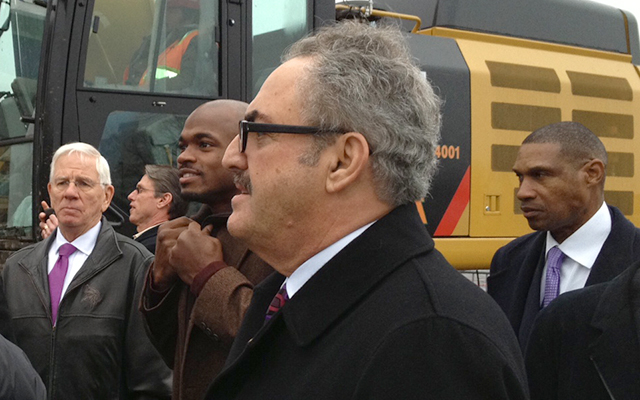 Breaking up all this mutual back-patting was running back Adrian Peterson, who appeared briefly to say that he was excited about the new stadium, although he admitted that he was “not looking forward to playing outside. Of course, my opponents will have to play outside, too,” he added.

Both Rybak and Dayton did take time to wax on a bit about the economic benefits they hope the stadium project will produce. The Sports Facilities Authority has set goals of 38 percent for minority hiring for the stadium and 20 percent for women.

“The project will teach scores of people a new trade,” said Rybak. He added that the Ryan Companies’ proposed $400 million office-retail-residential complex plus park in downtown Minneapolis (in which Wells Fargo is to be the principal tenant) is in its “final throes,” by which I think he means, on the verge of becoming reality.

“This will bring together the University, the surging riverfront, the wonderful Elliott Park neighborhood and downtown into a place that has been vacant.”

If the stadium can somehow weave those neighborhoods that support restaurants, stores, offices and other activities seven days a week, or at least five days a week, then the state and city’s half-billion investment in the project will produce tax revenues and jobs for years to come.

As the shoveling wound down, they pelted Dayton with questions that seemed a bit churlish given the occasion:

• How sure could he be that the stadium would come in on time and on budget? (That’s the job of the Sports Authority.)

• How sure could he be that development would occur around the stadium? (Well, Ryan’s project seemed to be a go, probably more would come.)

• His poll numbers are down — does he think that’s because the people think the state got a raw deal with the stadium? (He did what he thought was best for the state of Minnesota, and voters could decide next fall if they didn’t like it.)

• Would Vikings tickets be too expensive for the average Minnesotan? (Probably, but they’d be more expensive if the team had moved to Los Angeles.)

And in a way, you could say that there hadn’t had much of a choice.

As he pointed out, “If this had not happened, if the Vikings had not continued to be here, and left behind a dilapidated stadium, with an uncertain roof and an uncertain future, no anchor tenant generating revenues, and vacant space all around it, I don’t know how anybody can consider that success.”

At least now there’s a shot at turning around a large chunk of downtown.