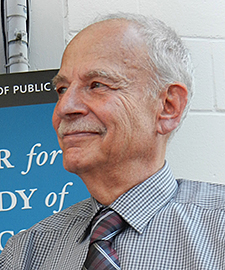 The multi-year fight over the Vikings football stadium is over. In a matter of days, the Metrodome will be hauled away to the junkyard. Proponents of the new stadium already celebrated the groundbreaking, and ahead of them lie more festivities — and headaches, like cost overruns and construction delays. But what of the stadium’s foes? Dan Cohen, candidate for Minneapolis mayor in the recent election and member of the City Planning Commission, was one of the fiercest voices raised against the state and city’s nearly $500 million contribution to the cost. Cohen and two former officials launched a lawsuit against Minneapolis to stop it from selling bonds to finance a parking ramp and a park that are part of the Ryan Companies Downtown East development plan because they would also be used accommodate Vikings fans. Even though the suit was hanging on by a thread, and the stadium appeared to be a done deal, Cohen remains firm that a casino is a better fix for downtown doldrums:

They talk about jobs for this stadium. Well, after they build it, where are the jobs? You build a downtown casino and you’ve got hundreds and hundreds of jobs. It’s not just building it, but staffing it. With a stadium, you might have a number of events besides Vikings games, but a casino operates 365 days a year day and night. There are three shifts of workers. At the Vikings stadium, there will only be as many shifts as they’re able to rent the place.

What’s more, the stadium will pay no property taxes. A downtown casino would pay property taxes, operating fees and licensing fees. There are the salaries of three shifts of people 365 days a year and corporate taxes, all of which amount to an enormous tax base paid.

Block E might have been one place to put it but my preferred site would be to do what was done in Kansas City and that is to have a riverboat. If Minneapolis got one, I’d like to see one in St. Paul too.

It’s unclear why there’s been a lack of interest. After all, they do it in Milwaukee. Milwaukee has a downtown casino. So do Kansas City and St. Louis. Dubuque, Iowa, has a downtown casino. Duluth, Minnesota has a downtown casino. We in Minneapolis seem to be very inward looking. We have a casino out in Prior Lake, and every day, four buses make 22 stops in downtown Minneapolis picking up downtown residents with their downtown money and taking them out to Prior Lake. And there hasn’t been a strong interest in providing any competition for that facility downtown. That’s what I have tried to do, and I’ve been unsuccessful in doing it, but I am going to keep trying.

There’s no reason why Prior Lake has to be a monopoly. Las Vegas has casinos on every corner, and they don’t seem to be starving for business. A casino here would be a huge tourist attraction. There are conventions of all kinds here, and a casino would be an attraction for conventioneers. We don’t have a year-round tourist attraction. Sports facilities like the Vikings and Twins stadiums are seasonal; this would be open year-round, 365 days.

Vikings stadium opponent: ‘Where are the jobs?’