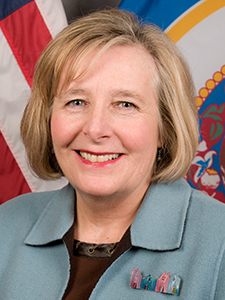 The fashionable political buzzword for 2014 seems to be “inequality.” Every public figure from newly inaugurated Minneapolis Mayor Betsy Hodges all the way up to POTUS, who is slated to address the nation Tuesday night, has declared or plans to wage a war on it.

Following the trend, Susan Haigh, chair of the Metropolitan Council, struck the theme in her annual State of the Region address delivered Monday at Macalester College in St. Paul. After itemizing the Twin Cities’ considerable pluses — a low unemployment rate (4.6 percent in December), the presence of 18 Fortune 500 corporations, general prosperity, a low crime rate, beautiful parks and trails and a robust cultural scene — she went on to point out that not everybody in every neighborhood enjoys this well-being: “Our region has some of the most shocking race-based disparities the country.” We fall behind Atlanta, Chicago, Dallas, Seattle and Washington, DC. “I am pretty embarrassed that our region is at the top of a list I don’t want the top of.”

Just because the topic is fashionable doesn’t mean it’s of no consequence. Haigh listed some familiar statistics to back up the claim that our regional economic machine hasn’t been producing fabulous results for minority groups. The Twin Cities region ranks first among the 25 largest metros for disparities in poverty (blacks are nearly six times likelier to be poor), unemployment (the rate for blacks is almost three times higher than for whites) and homeownership (only half as many black households are likely to own their homes). In income, we are fourth worst. Per capita annual income for whites is about $37,500; for blacks it’s only $18,100.

The non-white portion of the population is increasing; and there has been a  growth in — here’s a rather ugly bureaucratic term somebody invented — RCAPs or “racially concentrated areas of poverty.” (By definition, an RCAP is a place where 50 percent or more of the residents are people of color and 40 percent or more have incomes that are less than 185 percent of the poverty level.) In 1990, 31 census tracts that were home to 3 percent of the metro population lived in RCAPs. By 2010, the number of census tracts had increased to 80, and they housed 9 percent of metro-area residents. Where are the RCAPs? You no doubt already know: in the center and north side of Minneapolis, Brooklyn Center and Brooklyn Park, and various pieces of St. Paul.

Inequality, Haigh added, “is a barrier to growth in our region.” She’s correct, of course. If the racial disparities continue or widen, the Twin Cities could approach something resembling Guatemala, where I spent two years as a Peace Corps volunteer. In that case, a tiny white elite lorded it over vast numbers of poor Mayans. Only a few people could afford goods and services; so businesses either didn’t bother to produce them or charged immense amounts just to stay afloat. (A jar of pickles, for example, cost $12.) With such limited markets, the economy never took off.

For a mass-market economy to work, the masses have to make money — and spend it. Having more people actively participating would boost prosperity.

Haigh contends that if the Twin Cities’ racial disparities were eliminated by 2040, which happens to be the horizon for Thrive MSP, the Met Council’s next iteration of its comprehensive plan, “we could inject $35 billion into the economy.” According to the Met Council’s analysts, nearly 216,000 more people would be homeowners, 137,000 more would be employed and 182,000 more people over age 25 would have high school diplomas.

Those certainly are goals worth striving for. But how to get from A to B? Here’s where things get a bit dicey.

According to Haigh and other thinkers at the Met Council for whom she speaks, the aim should be equity, not equality. Equality, she explained, doesn’t always help. If you drop people in the middle of a lake and give each one the same bathing suit and tell them to swim to shore, you would be treating them equally. But some people need extra help to complete the swim, possibly nose plugs, water wings or flippers. “Maybe somebody would need a Jet-ski,” she said. Providing a tailored approach would produce equity.

So, the Met Council’s aim, according to a draft of Thrive MSP, would be to “use equity as a lens to evaluate its operational, planning and investment decisions and intentionally use its resources, roles and authorities to mitigate the place-based dimension of racial, ethnic and income-based disparities.” And that seems to mean pushing extra aid to RCAPs — subsidizing market-rate housing, adding affordable housing and so on. There’s more, and you can have a gander at it by looking at pages 19 to 23 of Thrive.

My problem with this: the Met Council would be building up and improving the RCAPs, but they would still be racially isolated neighborhoods with lousy schools. “And even if you rebuild the schools, they would still be segregated schools,” says Myron Orfield, a University of Minnesota law professor and director of the Institute on Metropolitan Opportunity, which studies economic and social inequity in suburbs and cities. And, as we all learned in Brown v. Board of Education, separate but equal is inherently unequal. People might be making it to shore, but they’d be swimming in race-based lakes.

Call me crazy, but my vision of equity — or lack of inequality — would be a region where all communities, from Minnetonka to Frogtown, have at least some racial and economic mix. To achieve that, the Metropolitan Council would have to return to its 1970s policy of requiring all communities in the metro to provide — or prove that they have — a sufficient share of affordable housing. “If we had continued with that, we’d have completely integrated schools by now,” says Orfield.

Instead, the Met Council, despite its good intentions, may be hardening our separation into two metros — RCAPs and everyone else.