A draft study that came out Thursday may nudge the impasse over the Southwest light-rail project toward a possible solution.

Part of the line would travel through the scenic Kenilworth corridor between Cedar Lake and Lake of the Isles, an area that already carries Twin Cities and Western freight traffic. Minneapolis, not surprisingly, prefers that the freight train relocate to St. Louis Park, which, for its part, vehemently objects because the proposed track would have to run along a presumably hideous berm two stories tall and pass by a school and a library.

When politicians see an immovable object meeting an irresistible force, they call for more study. And so Gov. Mark Dayton, concerned that the entire project would — ahem — derail over the dispute, delayed the Metropolitan Council’s vote on the LRT to allow further investigation of alternate freight train routes. Also produced at his command was an assessment of the LRT’s possible harmful impact on water in the Chain of Lakes; some Minneapolis residents had complained that the tunnels might “de-water” or drain the lakes.

First for the pretty good news: TranSystems, a Kansas City transportation and engineering consultant, looked at nine possible pathways for the TC&W line. Most of them fell by the wayside. One route, for example, which connected TC&W to another train route to the west of the metropolitan area, would have made rail operations too expensive and “commercially unviable,” said Jim Terry, a TranSystems principal, at an afternoon press conference. A line through Chaska had already been built over by homes and businesses. Another route required a costly repositioning of bridges. When all was said and done, the consultants found two viable alternatives. One, of course, would be the Kenilworth route. The train is there now, said Terry. “It needs some upgrades, but it works.”

I, like others in the room, fully expected that Terry would say that the previously proposed St. Louis Park route was the only other option. But we were in for a surprise — a variation he proposed called MNS North. Terry said that he and his team had come up with the solution after attending town meetings in Minneapolis and St. Louis Park and listening to residents’ ideas.

The new St. Louis Park alignment would cost about $105 million, Terry estimated, not counting land acquisition, and would require the removal of about five to seven homes and a similar number of businesses. Those numbers sound relatively reasonable compared to others we’ve heard before: $150 million to build shallow tunnels through Kenilworth, $210 million for the previous St. Louis Park route with its ugly berm and the taking of some 34 homes and businesses. What’s more, the LRT could run at grade through Kenilworth.

State Rep. Frank Hornstein (DFL-Minneapolis), who chairs the House Transportation Finance Committee, and Scott Dibble (DFL-Minneapolis), his counterpart in the Senate, seemed almost thrilled at the news. “This is a new option that appears to be viable,” said Hornstein. “This is a significant new option,” echoed Dibble. “All the issues seem to be addressed.” Minneapolis Mayor Betsy Hodges was also present, and though I wasn’t able to buttonhole her, she looked as though she had avoided a firing squad.

Less happy was Jake Spano, a member of the St. Louis Park City Council. “We are back at the same place all over again,” he said, obviously discouraged. “It feels like Ground Hog Day.” 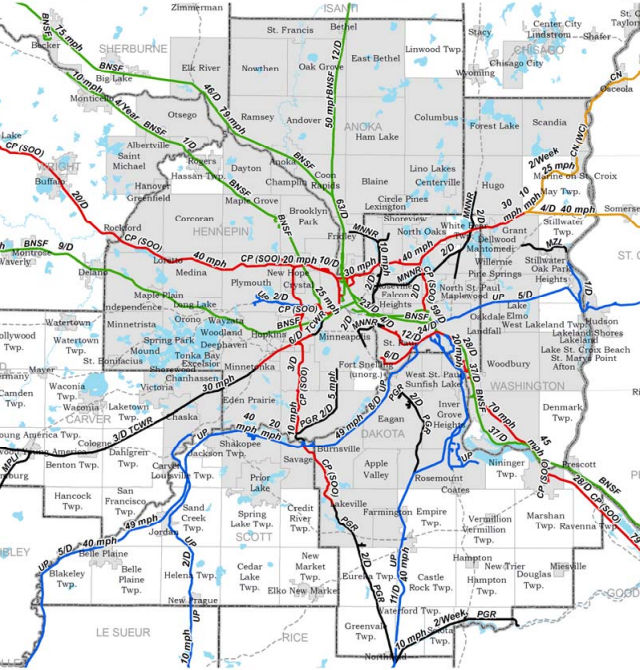 He pooh-poohed the notion that a consulting company could come up with a solution in only two months and suggested that TranSystems’ berm-free option probably wouldn’t work out when the details were studied. What’s more, he contended, that $105 million was current dollars. By the time, the Met Council started the project, say in 2018, the price tag would be much stiffer. “We need a lot more examination,” he added.

That he’s likely to get. Susan Haigh, Met Council chair, said that she and her cohorts had only just received the draft reports that day. “While these reports provide additional technical information about both freight and water issues, their conclusions must undergo technical, community, fiscal and policy scrutiny.” She expects, however, that the council will make its routing decision by the end of March.

I almost forgot the better news. The water resources report, which was written by Burns & McDonnell, also of Kansas City, affirmed previous conclusions that shallow light-rail tunnels in Kenilworth would have minimal impact on the water in the lakes. Della Young, the company’s regional environmental studies and permitting manager, said the train would be enclosed in a kind of box made of sheet panel walls; so de-watering would not occur. The possibility was so remote, she added, that very term “de-watering” should be removed from future reports.

Of course, all this planning is beside the point if the state fails to come up with enough money — about 50 percent of the $1.25 billion project — to qualify for federal funds. Last year, the governor proposed a dedicated sales tax assessed on metro residents, but the Legislature failed to pass it. And this year he did not include $81 million in funding the Met Council requested.

In the meantime, it’s full steam ahead. The consultants will present the reports at public meetings  in February. Those who can’t weigh in in person can register their views on an online comment form.

An earlier version of this article incorrectly characterized a dispute involving the Southwest light-rail project. The dispute concerns the route of a freight train that operates through the Kenilworth corridor.