This just in: A brand-new report on the future performance of the U.S. housing market. Called  “A Tale of 2000 Cities: How the sharp contrast between successful and struggling communities is reshaping America,” it analyzes housing market data for states, metropolitan areas and 2,200 of America’s largest cities and towns.

The work was undertaken by the Demand Institute, a non-advocacy nonprofit think-tank jointly operated by The Conference Board and Nielson. The Institute’s purpose, they say, is to provide business leaders around the world with objective information on consumer demand.

The subject of housing values may sound dryer than dry wall, but if you own your home or if you’re thinking of buying one, the issue is pretty critical. Will the dwelling into which you’ve sunk your dough depreciate in value like a car, will it steadily rise like a good mutual fund or will it take you on the roller-coaster ride that ends up with you and your home underwater?

On a macro-level, housing values also measure the prosperity of the community in which you have chosen to live and raise your family. “Drive through any American town, city or village and you can readily judge how well the community is faring by the types of property, their size and condition,” said Louise Keely, chief research officer at the Demand Institute and co-author of the report.

On the way to recovery

The overarching good news is that the nation’s housing markets are well on the way to recovery. Already housing values have rebounded in many markets. But nobody should kid himself that we’ll be returning to the frothy exurban expansion that occurred a decade ago or to double-digit annual increases in value we’ve enjoyed in the past couple of years — which “were largely driven by investors buying up swaths of distressed homes to meet growing rental demand,” according to the report.

Instead, the institute is forecasting that median prices of existing single-family houses will grow at an average annual rate of 2.1 percent between 2015 and 2018, an increase that runs only slightly ahead of projected inflation rates.

Those gains will put national median prices near their nominal 2006 peak, though after adjusting for expected inflation rates, median home prices will still stand 25 percent below that level. (Of course, the bubble prices of 2006 are phony benchmarks, since houses had by that time become grossly overvalued.)

Moreover, those increases will not be uniform. Housing values among the 50 states and the 50 largest metros will vary drastically, with the strongest markets  enjoying price rises three times higher than the weakest.

So where do we stand? The states likely to see the strongest rise in the median price of an existing single-family home, measured from a market trough in early 2012 to the end of 2018, are New Mexico (33 percent), Mississippi (32 percent), Maine (31 percent), Illinois (31 percent), and New Hampshire (28 percent). Those with the lowest projected price rises are Washington, D.C. (6 percent), Minnesota (13 percent) — gulp! — Virginia (14 percent), New York (14 percent), and Alaska (15 percent).

Similarly, the Minneapolis-St. Paul-Bloomington metro also ranks low among the top 50 cities — fourth from the bottom, with a projected increase of 12 percent.

Those percentage increase forecasts do not tell the whole story, Keely says. Property in the Twin Cities, for example, is more valuable than property in Memphis, which occupies the No. 1 spot for growth, with the median house increasing in value by 33 percent from 2015 to 2018. But the median cost of a house there in 2018 is projected to be $157,000, while in the Twin Cities, it will hit $201,000. Minnesota — and the metro — may lag behind other areas, says Keely, perhaps because the rise and fall of housing values during the bubble and its aftermath were less precipitous than those of other states.

What’s more striking, perhaps, is the report’s conclusion that when it comes to housing — as with everything else — the rich get are getting richer. The report added up the total value of owner-occupied houses in each of the 50 largest metros and ranked them. As it turns out, the top 10 percent on that list held 52 percent of the total housing wealth – a total of $4.4 trillion. Despite the recession, those communities have experienced a 73 percent growth in housing value since 2000, 51 percent of the increase in income and 49 percent of the employment opportunities. 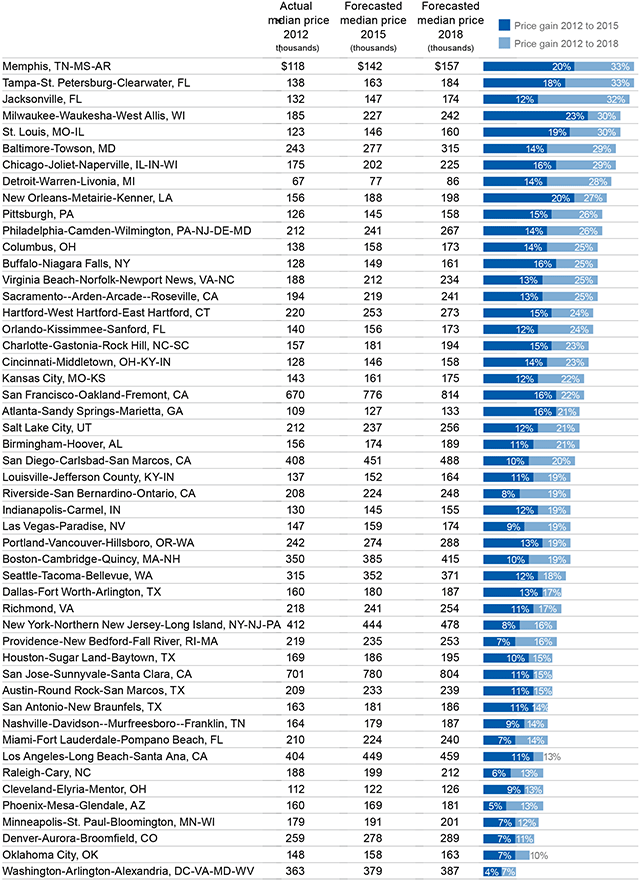 The gap between communities

The bottom 40 percent held just 8 percent of housing value, or $700 billion worth. In the same 12-year span, they had seen just 9 percent of the increase in income and 9 percent of the growth in employment opportunities. The upshot: There are not only wide gaps in wealth between individuals but also between entire communities, even in the same state or metropolitan region.

How will that play out in the future? Projections over the next few years show property values in the top 10 percent of communities set to rise seven times more than those in the bottom 40 percent — $1.9 trillion to $260 million. For the well-off communities, the increase translates to a virtuous cycle; more property-tax revenues support more public services like schools, parks and mass transit. Those in turn draw more people, and they drive housing values up still further. For poorer towns, the spiral works in reverse. Tax dollars fall, public amenities decline, employers move elsewhere and property values drop.

That rich-getting-richer syndrome spells stasis. Only about a dozen of the 2,200 towns studied moved into or out of the top ranks in recent years. “Absent unexpected developments, it seems highly likely that the weakest communities will lag further and further behind,” write the authors who sorted towns and cities into nine different types, ranging from the successful — so-called “Affluent Metroburbs” — to the troubled or “Endangered Communities.” In Minnesota, only Hibbing ranked as “Endangered.” (You can see where your own town falls on the institute’s interactive maps.)

What to do about the gaps in community well-being? Keely has no ready answer. “Our goal was to shine a light, to help people see inequality at the community level.” The first step toward any change, she adds, is “to understand the landscape.”