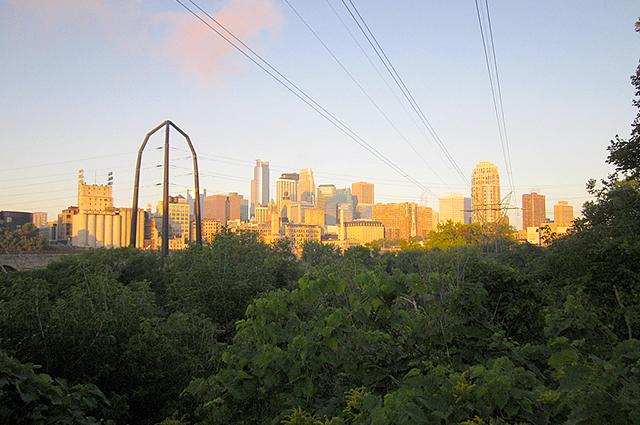 Creative Commons/Doug Kerr
Hennepin County ranks in the top 10 — fifth, with 42 units available for every 100 families.

And now for a little good news.

Hennepin County has made it onto one of those top 10 lists that seem to pop up almost hourly.

So what are we famous for this time?

Well, we are not, as you cynically suspect, one of the best places to shovel snow or get bitten by mosquitoes or even to suffer from Seasonal Affective Disorder. No, unlike the many of the top 10 lists, this one, issued by the Urban Institute, a liberal Washington, D.C., think tank, evaluates something fairly important: to what extent counties in the nation have managed to close the gap between the number of available affordable rental housing units and the number of households needing them.

In recent years, families of modest means have had greater difficulty in finding housing. Rents have risen dramatically. (That’s one reason why you find so many developers building apartment houses.) At the same time, the number of renters who need moderately priced housing has also ballooned. The burden falls most heavily on the very poorest or what the U.S. Department of Housing and Urban Development calls “extremely low-income households (ELIs).” By definition, they earn less than 30 percent of the area median income. That would be about $24,850 a year for a family of four in the Twin Cities metro.

Number-crunchers at the Urban Institute counted the available units that were affordable for such people; to qualify, a rent would have to be less than 30 percent of their total income or about $621 a month for a family of four. Then they compared that total to the number of ELI families to figure out how big the gap was — and created an interactive map showing each county.

In a perfect world, the balance would be even. For every 100 ELI households, there would be 100 affordable rental units. But, of course, the world we live in is anything but perfect, and across the nation, there are only 29 units available for every 100 families.

What happens to the remaining 71 families? They may be homeless; they may pay much more than 30 percent of their incomes for housing; or they cram themselves into a rental unit that’s too small.

Before any county takes a bow, however, it has to acknowledge that its ratio would be abysmally lower were it not for assistance from the federal government. Public housing and housing vouchers make up most of the gap. In fact, if they did not exist, the United States would have only one affordable rental unit available for each ELI household. 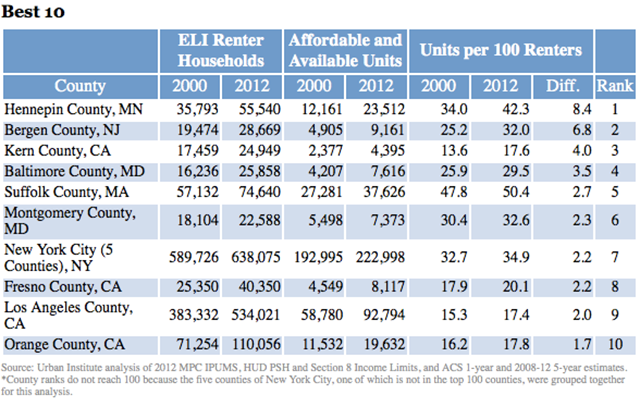 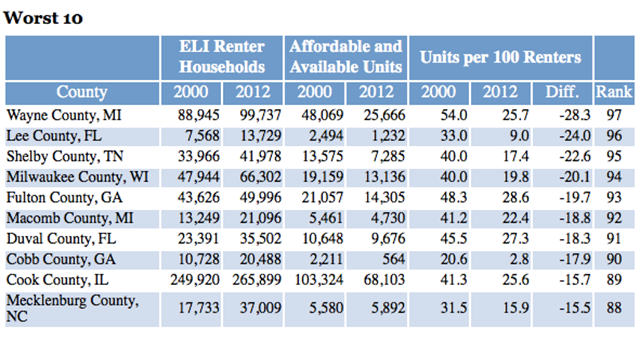 Some counties have been working hard to close the affordability gap, and here’s where Hennepin County shines. Over the past decade, it has managed nearly to double the amount of affordable housing, even while its population of needy families increased by about 55 percent. That achievement puts it at the top of the rankings for counties making the most progress, up from 34 units per 100 families in 2000.

Jan Callison, a Hennepin County commissioner who represents the western suburbs, says, “It’s a great result.” Nevertheless, she adds that the finding surprises her. “Housing has become more expensive. We lost housing on the north side of Minneapolis in the tornado a few years ago, and it’s become more difficult for developers to use tax credits to build affordable housing.”

Still, a great deal of effort has gone toward edging up the amount of housing available. Kevin Dockry, assistant director of Hennepin County Housing, Community Works and Transit department, points out that the state’s Housing Finance Agency has been active in providing funds, and both the county and Minneapolis have channeled money to supplement federal loans and grants to create more affordable housing.

One project, only two years old, is Catholic Charities’ Higher Ground, on Glenwood Avenue near the Twins ballpark. The building includes 60 bunk-beds on the first floor and 80 “pay-for-stay beds,” on the second floor where residents “rent” a bed for $7 a night. Floors three through six contain 74 single-room-occupancy units and the top floor has 11 efficiency apartments. Since it opened, some 95 men have moved from temporary shelter into permanent housing.

Also underway from nonprofit developer R.S. Eden is Emanuel Apartments, a 101-unit building for single people who have been homeless or struggling with drug or alcohol addiction. The complex, which will be right near the new Metrodome (only a couple of blocks away from where I live) and within walking distance of the Hiawatha LRT line, will offer mostly efficiency apartments, with some set aside for veterans.

Hennepin County has made efforts to utilize what Dockry calls “naturally occurring” affordable housing — single-family houses in the inner suburbs or older neighborhoods that have seen better days. The county offers landlords loans and grants to help bring units up to code — installing new boilers, for example. But, says Dockry, few landlords have become involved in the program. With the rental market currently as tight as it is, they may see no need to improve their properties or attract low-income families.

Little will change unless the federal government sharply ramps up its housing assistance programs. That’s unlikely given Congress’ tight-fisted approach to all aid to the poor. So for now, closing the gap remains a tortuously slow process.

Hennepin County among best in nation at closing housing-affordability gap