I am no enemy of teardowns. In fact, they brought me great profit. Right on the cusp of the housing collapse, our next-door neighbor in Westport, Conn., sold her modest Colonial to a developer who extracted 70 percent of the trees and built himself a 6,000 square-foot five-bedroom, six-bath mega-mansion.

While the house was pretty hellacious, it made our previously fusty and unfashionable neighborhood more desirable. So when it came time to sell a few years later, we were easily able to unload our small Cape Cod at a fair price even though the market had tanked. (The new owner promptly tore down our house and put up a 4,600 square-foot number that would now fetch seven figures.)

On the other hand, I had mourned the loss of Westport’s quaint 1830s New England farmhouses — which were replaced with the bulky mansions favored by Wall Street money managers who had no compunction about violating setback, size and height restrictions. Their mantra seemed to be “So sue me.”

Consequently, I wasn’t sure what to expect when I drove through Minneapolis’ 13th Ward, where an interim moratorium on new wrecking permits is now in effect. The measure — initiated last month by the area’s newly elected council member, Linea Palmisano — was designed, she says, to give the city time to study the problems caused by a spate of teardowns that has taken over her community. 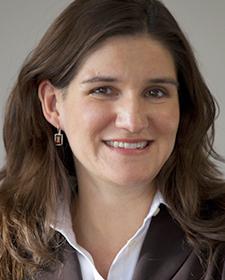 In the lull, which could last as long as a year, she is hoping that CPED (the Community Planning and Economic Development department) will “take a fresh look at regulations.” The interim moratorium remains in place until it goes through the City Council approval process; the next step is a hearing on April 3 before the council’s planning and zoning committee.

I had no trouble finding the rebuilds. They are scattered on practically every street of Linden Hills and to a lesser extent in other south Minneapolis neighborhoods. “Activity increased 117 percent in 2013,” says Palmisano.

Not every rebuild is included in the official stats. Some developers take advantage of holes in the zoning code by moving ahead with “virtual teardowns” on remodeling permits.

What I saw when I toured the neighborhood didn’t outrage me. While not every new house was something a builder would want to feature in his or her portfolio, most fit on the lot, left some room between themselves and their neighbors on either side and were far from the monstrous eyesores I’d thought I would see. There was some construction debris in the yards, the occasional dumpster and porta-potty (ew!) on the street and groaning generators. But the travails of construction are temporary, and presumably the new owners would clean up the mess after the project was complete. Is the moratorium, I wondered, another case of NIMBY-ism?

Palmisano and Douglas Kress, director of development services, and honcho of the CPED study, maintain, however, that the nuisances are severe and not always temporary. The sump pumps going all day long, the cars and trucks out front, blockage of sidewalks and so on make life miserable for neighbors.

“This is not the [Vikings] stadium, but it is where people rest their heads and have their biggest investment,” says Palmisano.

More significant, however, is some of the collateral damage that neighbors have experienced.

“The costs are paid by owners of neighboring houses,” says Kress. The area has a high water table, which means (I am told, because I know no more about water tables than about quantum mechanics) that the ground below is already wet. When houses become bigger, says Chris Meehan, interim regulatory program manager for the Minnehaha Creek Watershed District, there’s an increase in impervious surface area — more extensive roofs, for example. As a result, more water drains off into the sewer system, which can’t readily absorb the excess.

That. in turn, can create ponds in alleys and on neighboring properties. The watershed district does have regulations requiring builders to create rain gardens or install infiltration systems that will drain water more slowly and avoid pooling. If so, why is the flooding still occurring? Meehan speculates that the city’s aging sewer system might not have the capacity to handle all the runoff.

Some developers, Palmisano says, have created problems by digging foundations too deep. On a couple of occasions, the undermining causes a neighbor’s driveway or house to sink or tilt. 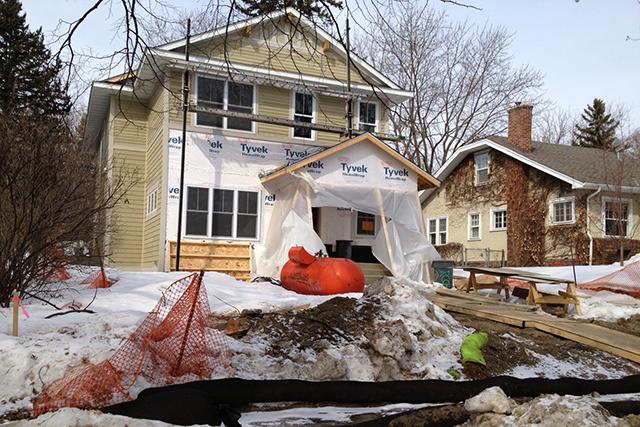 MinnPost photo by Marlys Harris
This house on Chowen did not conform to the plan filed with the application for a permit. Apparently, the windows do not meet the building code.

Of course, Minneapolis has regulations to prevent some of the problems. Developers are not supposed to obstruct the sidewalks; dumpsters and latrines belong in yards and not on the boulevards. But some builders have flouted the restrictions. The rebuild shown above logged seven violations, among them a leaking porta-potty in front (double ew!); a dumpster blocking the handicap parking spot used by the next-door neighbor; and water pooling in the alleys, creating skating rinks in the polar vortex weather. Also, the house did not conform to the plan filed with the application for a permit. Apparently, the windows do not meet the building code. The city, according to Kress, has issued a stop-work order; however, when I passed by, workers were busy on the site.

In another case, the builder raised the foundation so high that the house violated the floor area ratio. (That’s the amount of square footage allowed for a particular lot size.) While none of these infringements rank as major crimes, they certainly shouldn’t be happening.

All that stuff has to make you sympathetic to backers of the moratorium. But Palmisano has concerns that go beyond what she calls “construction management” and water drainage. While she says she’s not against the teardowns, she’s worried that the neighborhood could turn into an enclave for the 1 percent, or the 10 percent, anyway. The in-fill development is removing houses that schoolteachers and cops can afford. And, the elderly feel pushed out — and in fact may be pushed out as property taxes rise with the neighborhood’s fortunes.

“Age is just about the only kind of diversity the neighborhood has,” says Palmisano.

“Keeping houses small to be affordable” is a pipe dream, says Larry LaVercombe, a real-estate agent and chair of the Linden Hills Neighborhood Council’s zoning committee. If well-off people want to move to the area, they should be allowed to do so.

“There’s no way to limit the market parcel-by-parcel,” he says. Even if zoning regulations tried to discourage teardowns in the 13th Ward and to encourage them in, say, North Minneapolis, the likelihood is that families denied Linden Hills would instead choose to move to Minnetonka or Wayzata. That’s how the free market operates.

I would add that the elderly cycle out of neighborhoods. After the kids leave home, many aging homeowners tire of mowing the lawn and shoveling the walk (or paying someone to do it for them) and move to an apartment. Even if they don’t, they eventually — well, you know. The fact that the 13th Ward is a popular destination for families helps them by boosting the value of their houses and allowing them to walk away with tidy bundles if they sell.

Palmisano would also like the CPED study to address the issue of the “massing” — the height and size and clumping of the new dwellings. She’s a little vague about what she means, but it seems as though she wants streets to have a unified look, with doors in the same spots on houses, for example. LaVercombe says that people should have the right to build pretty much what they want, within the parameters of the zoning code.

But, he adds, “I think people have some right to sunlight.” Some of the new houses cast giant shadows over the neighbors’ backyards. “You should be able to grow a few tomatoes there.”

All in all, LaVercombe thinks that the moratorium is doing more good than bad.

“There’s already been a vast improvement in the short term,” he said. “Many sites have been cleaned up, and there are discussions about improving the city’s inspection and enforcement.”

And the water issues need attention. “I am for the process Palmisano has initiated. People may be angry in the short term,” he adds, “but a lot is being done.”