How can our metropolitan area close the gap between rich and poor — or, at least between the poor and the other 90 percent?

One way is to stop stuffing low-income housing into low-income areas that already have plenty of it and intensifying already segregated neighborhoods.

That was the repeated message conveyed by suburban officials, civil-rights and neighborhood activists who appeared at a forum on the Metropolitan Council’s housing plans — which won’t be final until this summer. The event was sponsored by the Institute on Metropolitan Opportunity at the University of Minnesota’s Law School; the institute is headed up by Myron Orfield, who also teaches courses in fair housing.

That the Twin Cities have major disparities is not a matter of debate. Our region ranks first among the 25 largest metros with poverty gaps. Blacks, for example, are nearly six times likelier to be poor, their unemployment rate is almost three times higher than for whites, and only half as many minority households as white are likely to own their own homes. Per capita annual income for whites (not counting Latinos) is about $37,500; for non-whites it’s only $18,100.

The nonwhite portion of the population is increasing; according to the Metropolitan Council, it should reach some 40 percent by 2040. That’s the time horizon of Thrive 2040, the Council’s latest iteration of a regional plan, which has yet to be ratified. As part of its Thrive effort and at the behest of the U.S. Department of Housing and Urban Development (HUD), the Council also undertook a Fair Housing Equality Assessment (FHEA) to evaluate — what? Well, the report doesn’t say so outright, but in fact it’s talking about racial and economic segregation in housing.

And, sadly, we have plenty of it, as evidenced by growth in RCAPs or “racially concentrated areas of poverty.” (By definition, an RCAP is an area where 50 percent or more of the residents are people of color and 40 percent or more have incomes less than 185 percent of the poverty level, about $42,600 for a family of four in 2011.) In 1990, 31 census tracts that were home to 3 percent of the metro population lived in RCAPs. By 2010, the number of census tracts had increased to 80, and they housed 9 percent of metro-area residents.

Where are the RCAPs? You no doubt already know: in the center and north side of Minneapolis, Brooklyn Center and Brooklyn Park, Richfield and various swaths of St. Paul. It’s nothing short of amazing that the Twin Cities region, with its rather small percentage of minority families, is so segregated.

In any case, RCAPs typically have the highest crime rates, the worst housing, the lowest performing and most segregated schools, and worse health outcomes than the standard suburb. (On average, life expectancy in Eden Prairie is nine years more than in North Minneapolis.) “Because RCAPs limit the economic mobility of their residents and discourage private investments, our region simply cannot afford to allow these areas to persist or grow,” says Thrive.

The Minnesota Metropolitan Land Planning Act, passed in the 1976, anticipated the RCAP problem before the acronym was even invented. It sought to bust up housing segregation by requiring all the cities and towns in the seven-county region to accept allocations for affordable housing, specified by the Met Council. As a result, the Twin Cities were more successful in building and scattering affordable housing throughout the metro area than nearly anywhere else in the country.

Backed off from early success

But since the 1980s, the Council backed off of the requirement. Few cities except Minneapolis and St. Paul met even the modest quotas set for them and faced no penalties for their failures. Now most new affordable housing comes via low-income housing tax credits. An arcane scoring system decides which areas get them, and, because it heavily weights items like proximity to jobs (whether or not they are obtainable by poor people), the amount of low-income housing already in a neighborhood and so on, most of it winds up back in RCAPs. Only the Section 8 housing program that grants payment vouchers to the poor and allows them to rent wherever they can has allowed any significant dispersal of poor people into the suburbs. Sequestration of funds by Congress in 2013, however, slashed its budget.

For the first time since 1985 the Met Council is creating a housing plan, which is due to appear this summer, and Thrive 2040 says it aims to “mitigate the place-based dimension of racial, ethnic, and income- based disparities.” How? The FHEA raised questions but did not answer them.

Jumping into the breach is Myron Orfield, a longtime fair-housing proponent, who has a major complaint about the Met Council’s Thrive 2040 plan, not to mention the FHEA.

“Housing discrimination is not being discussed in this process,” he remarked in kicking off the forum. Although his institute was a member of one of the FHEA advisory groups, he says that the panel was dominated by builders of low-income housing. They have not done much to diffuse concentrations of poverty and race. As things stand now, 60 percent of subsidized units in the metropolitan area are located in Minneapolis and St. Paul. Some 85 percent of those sit in minority areas.

Those who testified (perhaps not surprisingly) affirmed his contentions. First up was a contingent from North Minneapolis, Stephanie Gruver, a ReMAX Results real-estate agent in the Webber-Camden neighborhood, and Julianne Leersen, executive director of The Neighborhood Hub, a nonprofit community organization. The two brought similar messages — that official housing policies segregate North Minneapolis and continually resegregates it by massing low-income housing there. 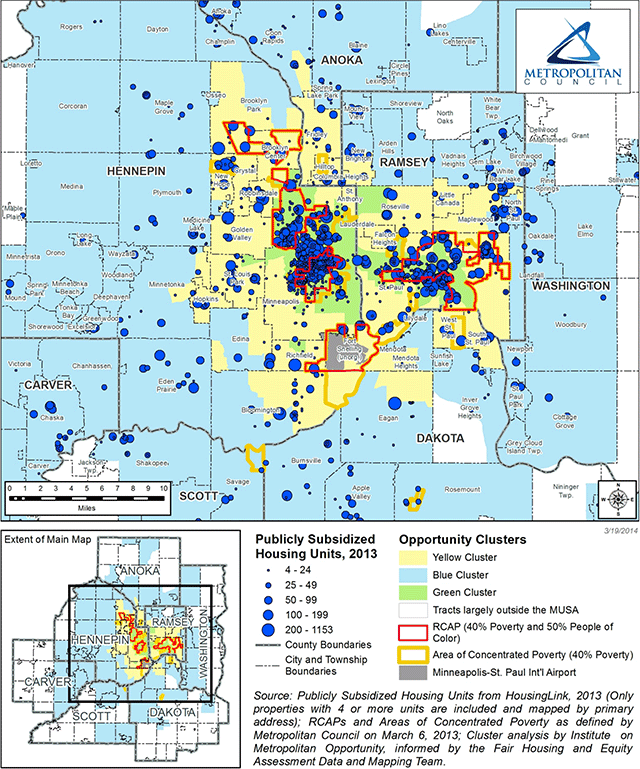 According to Gruver, the federal government’s and the Met Council’s practices of funding most affordable housing in poor areas is killing her neighborhood — and turning it into a neighborhood of renters instead of owners. Practically all new housing is subsidized, and as such, it is subject to income limits. Middle-income families who might balance the neighborhood economically are not eligible to buy and instead move to the suburbs. Gruver says that she often has multiple bidders for North Minneapolis houses, but because their incomes register slightly above the limits, they cannot buy. “We are restricting the buying pool,” she says.

Even if by some miracle, buyers come forth to purchase a nonsubsidized home, banks can’t appraise the property because there are no comparables; everything else is subsidized. She made a plea to HUD officials attending the hearing to enforce federal policies that oppose the concentration of minorities and poverty and to allow the building of some nonsubsidized houses on some of the many vacant lots in the area to at least provide comparables. Doing so, she asserted, might allow the return of market-rate housing.

“Businesses have left, and they’re not being replaced,” added Gruver. They can’t survive on the commerce of people who have little money to spend. “There continues to be a proliferation of low-income housing in low-income areas,” she says. “Affordable housing needs to be distributed throughout the metropolitan area.” And North Minneapolis needs more middle- and upper-income residents.

Next to be heard from were suburban officials. Bob Streeter, director of community development for Oakdale, which is east of St. Paul, testified that if things didn’t change, Oakdale and other inner-ring suburbs would be seeing the same kind of disinvestment as North Minneapolis and other RCAPs. Already poverty is emerging in Oakdale, and stores are shuttering. “Every census tract of concentrated poverty should see no increase in affordable housing,” he said. “At the very least, there should be a balance.”

John Stark, community development director of Richfield, said that the town is a suburb in organization only. Otherwise, “we are an urban demographic,” with a large Latino population. The way low-income housing tax credits are distributed targets Richfield, and the town gets very little credit for naturally occurring affordable housing and no help from the Met Council in fixing it up.

The town would like to encourage the development of market-rate housing to balance the increasing concentration of low-income residents, but most of its houses are on small properties. The only way to gather enough land for a major project would be to use eminent domain to condemn them. But a state law passed in 2006 has placed restrictions on the ability of cities to take property for functions that aren’t strictly public.

The effect on schools

Schools were next on the agenda. Mary Cecconi, executive director of Parents United for Public Schools, an advocacy group, pointed out that the FHEA had not included schools in its assessment. Obviously, since most kids attend schools near their homes, if housing is segregated, the schools will be too. Brown v. Board of Education did affirm that separate is unequal, but in Frogtown, one of St. Paul’s RCAPs, the plan is to renovate and build 4,000 affordable housing units in the next few years. As a result, said Cecconi, the school segregation there will deepen. Shawna Hedlund, another member of the group, pointed out that improving the public schools and then hoping middle-income families will move in and reduce segregation is a failed policy.

“We built nice facilities in North Minneapolis, but people didn’t come because of the housing,” she said.

In its Thrive 2040 plan, the Met Council says it aims to “mitigate the place-based dimension of racial, ethnic, and income- based disparities.” How? Well, there are vague generalities like “invest to built a more equitable region” and involve communities in decision-making. But, to me, the nub of it is to “invest in a mix of housing affordability along the region’s transitways,” presumably to help people there get to jobs and schools.

Doing that, however, may not mitigate segregation or poverty — or not mitigate it much. Most of the RCAPs are already located along bus lines and within easy commuting distance of downtown and corporate job centers. The problem is that those centers have positions for accountants, lawyers and other skilled workers and professionals. The entry-level positions poorer residents need are often scattered at factories, garages, restaurants, nursing facilities and private homes throughout the suburbs.

The Thrive plan does mention building affordable housing in higher income areas, but it doesn’t specify how it would accomplish such a feat, which would be controversial to say the least. Maybe its forthcoming housing plan will come with some specifics.