Richard Gilyard, an architect and board member of the Prospect Park East River Road Improvement Association, shamed me Monday morning when he remarked to his audience that many people mistakenly think the neighborhood is part of St. Paul.

Maybe geography dummies like me can be forgiven because Prospect Park‘s location, to the east of the University of Minnesota, does make the random driver feel like s/he’s headed straight for downtown St. Paul. And Southeast University Avenue, the area’s main drag, is lined with fairly homely office, industrial and apartment buildings that don’t really beckon to pedestrians. To the south of the avenue, however, lies a tree-filled, hilly neighborhood with a diverse housing stock (small apartment buildings and single family houses of all ages). 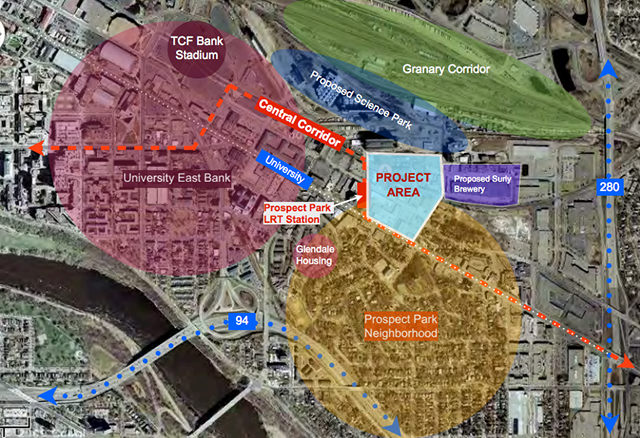 To the north of University Avenue sits an industrial district, and its own main drag, 4th Street, was the subject of the first session of the Saint Paul Riverfront Corporation‘s Placemaking Residency — which was why about 50 people (and I) were gathered at the Minnesota Textile Center. In this its third year, it stars Gil Penalosa, executive director of 8-80 Cities, a Toronto nonprofit consulting group that has helped towns around the globe make themselves friendlier to 8-year-olds and 80-year-olds, rather than just healthy 30-somethings. Penalosa will be in the Twin Cities (not to mention Bloomington and Wayzata) all week to provide advice and insight on making our area more livable — and prosperous.

The catalyst for Prospect Park is a brand-new LRT station on 4th Street and 29th Avenue, part of the Green Line connecting Minneapolis and St. Paul. (Trains making test runs were already on the tracks.) Because of its proximity to the university, the improvement association anticipated that the LRT would bring a surge of new development; so it created a plan to “green” 4th Street.

“We wanted to shape it rather than have something done to us,” said Gilyard.

The neighborhood’s vision [PDF] is an “urban village” that would combine a research park; some industry; new multifamily housing, 20 percent of it low-income; plus park, retail and commercial space that would lure pedestrians. According to a 2012 iteration of the neighborhood’s plan “Fourth Street should become a residential street. Housing adjacent to the street should be two-to-four story row houses with some high-rise buildings. Parcels adjacent to the transit station would provide a people-friendly environment with interior and exterior gathering spaces, retail/service related traffic generators, and visible activity.” And the movers and shakers behind the plan advocated collaboration among the various developments, for example, to create “reservoir parking” that could be used by a number of businesses.

My heart sank, however, when we went on a walking tour of “green 4th;” its prospect was a dreary brown and grey. “It takes a lot of imagination to see what this could look like,” said one fellow walker.

Still, things seem to be happening. Surly’s “destination” brewery, which will include a beer hall and garden, a restaurant and event center, is already well under way two blocks from 4th. The Cornerstone Group has purchased land on which it plans 250 units of housing, Aeon is taking over the site of the Habitat for Humanity building, and the Wall Companies have bought 17 acres for what eventually will be (they hope) a 65-acre Innovation Park, “for the promotion of medical, life science, and information technologies.”

Jeffery Hensley, a Wall veep who is honcho-ing the project, says its buildings will look like those in the university’s new Biomedical Discovery District, which, while not exactly warm and inviting, are much more appealing than what’s on 4th now. Hensley, however, says he wants the buildings to allow people to view their manufacturing and laboratory processes, combining — I guess — industry and entertainment. (I see school buses unloading for tours.)

Concern about pulling it together

But progress has been slow. The Cornerstone Group hasn’t broken ground, and Hensley says that he’s in the “telling-people-it’s-a-good-idea stage” of the innovation park. Gilyard is concerned about pulling the whole thing together. The neighborhood wants 4th to be more than a collection of random buildings but a neighborhood. Creating a distinctive look and connectedness from scratch with a batch of different developers won’t be easy. “We’re afraid that development won’t look all that much different than what we have now,” said Gilyard. 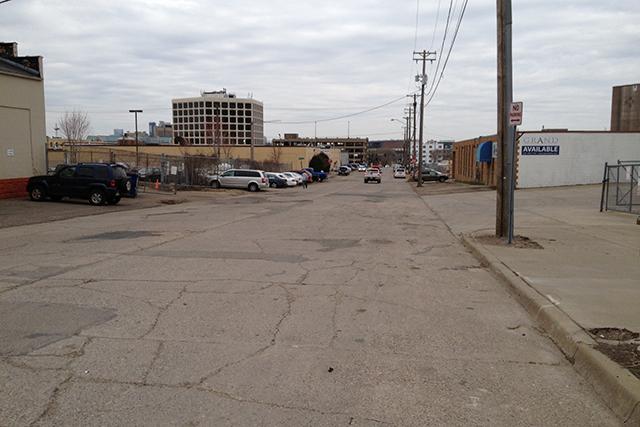 Penalosa, who delivered chats both before and after the field trip, is an engaging speaker with a Colombian accent. (He hails from Bogota, where he was parks commissioner.) He didn’t, however, provide much commentary on the Prospect Park plan. Instead, he tried to bring some inspiration to the group. “You have a magnificent opportunity here,” he said. But there should have been more of a sense of urgency about developing the area when the Green Line was announced. Citizens must step up now and push for what they want.

As far as his city-planning advice goes, well, his main themes are familiar ones: Walking, biking and mass transit are good, cars not so much. For starters, cars are very expensive; the typical two-car family spends about 25 percent of its income on fueling and maintaining its cars. If family members could use mass transit, bikes and feet, they would save thousands a year, which they could spend in the local economy. (Of course, they are spending it in the local economy now — on gas, tires and insurance.)

Streets, Penalosa added, make up the largest part of our landscape, but we consign them to cars, not people. To return streets to citizens, he suggested that cities drop speed limits to 20 miles an hour, making them safe for both kids and the elderly.

‘Maybe there are 15 horrible days’

As to Twin Citians’ excuse that the bad weather keeps them in their cars, he countered that when he worked in the Caribbean, people there told him it was too hot to walk. He pointed out that Minneapolis normally receives 43 inches of snow in the winter, but it’s spread over five months. “Maybe there are 15 horrible days and 43 bad ones.” We should be planning for the nearly 300 decent days, but instead, he says, we install “flyovers” like skyways “which suck life out of the city” for the 15 worst days of the year. (By way of comfort, he added that his hometown of Toronto makes the same mistake, connecting every building with underground passages.)

He flipped through a gazillion slides showing us how cities made themselves more beautiful, livable and walkable through acts of political courage. In one Danish city, for example, the city removed parking spots to widen sidewalks along a canal. Shopkeepers complained that they would lose business, but Penalosa showed us a slide of the area after the changes; it was mobbed. “Do you think anybody lost business here?” he asked.

To install bike-sharing racks, Paris removed 5,000 parking spots. And cities like Arhaus and Seoul deconstructed freeways to surface waterways that transformed desert-like areas into pedestrian malls that resembled Barcelona’s Rambla. What will get the job done, he says, is leadership, a sense of urgency, citizen engagement and all those other things that are nice to urge folks to have and do but not all that easy to carry out.

Cam Gordon, who represents Prospect Park on the City Council, mentioned some of the area’s other to-dos that would make a difference. The Grand Rounds in the area needs to be completed, and Bridal Veil Creek and its waterfall, which now are buried, should be “daylighted.” But the cities’ and region’s position, he says, is that they’ve made an immense investment in the Green Line. Private development will have to take care of the rest. But, he added, “that development may be way below our expectations.”

Penalosa’s answer is not to give up but to aim high. “Martians,” he said, “are not going to come down and fix our cities.”

Prospect Park: They have the vision, but what about the will?