As you’ve no doubt heard, unless you’ve been on an extended visit to Planet Beta Zeta V, the Green Line — aka, the Central Corridor LRT — will have its grand opening June 14. The train will provide a connection between the Twin Cities’ two downtowns — though how efficient that connection will be is still an open question. Test runs have clocked the trip at a full hour.

In response to questions about that, Susan Haigh, chair of the Metropolitan Council, which is in charge of the line’s construction and operation, asserted Wednesday that Metro Transit is still working on syncing up signals. Anyway, “Not everybody will ride it end-to-end,” added Haigh at a press conference to draw attention to the $2.5 billion in new residential and commercial construction that has occurred within a half mile of the LRT

But the new line brings with it a concern more significant than the speed of travel. In cities across the nation, new transit lines see developers bidding up the cost of land, even before the train starts operating. That’s already occurred along the Green Line. Some land that cost about $8 a square foot 10 or 15 years ago now sells for $35 a square foot. Higher property values lead, of course, to higher rents, generally pushing out people with low or modest incomes.

The proof? A 2010 report by the Dukakis Center for Urban and Regional Policy at Northeastern University studied change in 42 neighborhoods served by new train lines in 12 cities. The results: between 1990 and 2000, rents increased more quickly in 62 percent of the new transit zones than in the surrounding metropolitan areas, and so did the incomes of the inhabitants. Urban renewal by transit worked out, in many cases, to be poor-people removal.

Well aware of this concern, the Big Picture Project, a consortium of some 43 representatives of community groups, government agencies, foundations, funders, nonprofits and consultants, got together two years ago to assemble a “Central Corridor Affordable Housing Coordinated Plan.” (One is the Central Corridor Funders Collaborative, which supports Cityscape.) Its overarching aim: to prevent displacement of low-income people by building and preserving low-income housing.

The entire corridor, of course, is not a low-income neighborhood. The 11-mile-long LRT line passes through six different areas. At one end is downtown Minneapolis, which includes both fancy-pants condos and the giant (low-income) Cedar-Riverside housing development. From there, the train proceeds to the University neighborhood, then through a kind of industrial area now referred to as Midway West, to the modestly gentrifying Hamline area (Midway Central), Frogtown (Midway East), hard-hit by foreclosures, and then to the Capitol and downtown St. Paul.

The Big Picture, with the help of Wilder Research, periodically tracks “change indicators” to measure progress. Out this week, the current report offers a big but also mixed picture. Yes, the feared influx of so-called market-rate housing is occurring. For every new subsidized unit added along the corridor from 2011 to 2013, there have been 12 new market-rate units. But the rising buildings are not yet displacing the poor.

The Big Picture’s numbers tally somewhat with a spreadsheet provided by the Met Council (which has a more open-ended timeline of 2006 to 2016) listing some 70 housing developments along the Green Line that are either completed, underway or merely under discussion. Totaling about 12,000 housing units, some 46 percent will be market rate, 21 percent student housing, and 13 percent divided among senior (some affordable, some not), homeless and youth housing and housing whose type is as yet unknown. Only 21 percent or 2,440 units will be affordable, and 1,800 of them are in the Cedar-Riverside behemoths that were recently renovated. If you subtract them out, then, the portion is only about one in 20. 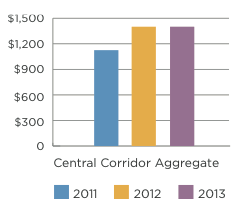 Rents have also risen along the corridor. The median rent for a two-bedroom apartment leapt to $1,400 in the third quarter of 2013, up from $1,225 during the same period in 2011. But, as the Big Picture report notes, the rent increase in the area likely reflects the increase in apartments located in downtown Minneapolis and new student housing located near the University. In point of fact, it went on to say, “the changes do not appear to be pushing out lower income households.”

Eric Muschler, program officer for the McKnight Foundation, one of the constituent members of the Big Picture, was cautiously optimistic. “The signs so far are really positive,” he says.

In fact, if you pinpoint the new and pending developments on a map of the Green Line, you’d find most of the market-rate housing bunched where market-rate housing already exists: in Minneapolis’ North Loop and Downtown East neighborhoods and in downtown St. Paul. Affordable units are concentrated in Frogtown and along University Avenue. Environs around the U of M will be receiving large clumps of — duh — student housing.

The bunching of poor people in already poor neighborhoods, however, does have an adverse effect: It keeps them in highly segregated schools, which by their nature, are inferior. Stark and the other folks behind the Big Picture, however, are hoping for and encouraging developments with a mix of the have-somes and have-not-so-muches. As an example, Muschler pointed to the 250-unit Boeser project in Prospect Park, proposed by The Cornerstone Group. It is slated for an 80-20 percent combo of market-rate and subsidized units.

Efforts to keep poorer families in their homes have not surged, either. Only in one area — mortgage foreclosure assistance — has the project already exceeded its 2020 goal of 303. But the project has granted just 51 home-improvement loans — though its goal is 598. There have been 25 vacant properties redeveloped (the goal is 150) and 98 first mortgages, in contrast to a goal of 402.  Of course, there are five-and-a-half more years for this project to run. “We’re on a good track,” says Stark. “But we need to get more resources in home improvement.”

The Green Line, however, has potential benefits for low-income people that could offset possible hikes in their rent. Higher housing values around transit do generally result in denser development. The Met Council’s spreadsheet shows 50 different renovation and construction projects. Some are in the two downtowns, but out in the nabes there are plans for breweries, restaurants, office buildings and retail — all of them bringing jobs. And with more housing will come more opportunities. Source: Twin Cities LISC
Poorer households may be less burdened by their rents if the Green Line allows them to cut their transportation costs.

Poorer households may be less burdened by their rents if the Green Line allows them to cut their transportation costs. The annual rush-hour fare on the LRT is $540. Owning and operating a small- or medium-size car runs nearly $9,000 a year.

But that could be a big if. While the Green Line may attract new residents who will commute to high-paying jobs in the two downtowns, current residents who moved in before the line was built may still have to travel by car to less accessible areas of the metro. In that case, rising rents will push them out.

Tracking the Green Line: Will urban renewal by transit turn into poor-people removal?