The weather was inauspicious Saturday for a media test run of Metro Transit’s brand-new $957 million Green Line light-rail train, due to open June 14. Rain poured down from the heavens, and the temperature hovered in the low 50s.

But, the ride, from Union Depot in St. Paul to Target Field in Minneapolis, went off without a hitch. Several people marveled at the “new train smell” of the state-of-art, built-in-the-U.S. cars. (They even come with cruise control.) Most striking to me, however, was their quiet, almost silky travel along the tracks. There was none of the side-to-side, start-and-stop lurching, rumbling and screeching that riders have to deal with on New York City subways. Customarily impassive bureaucrats had trouble suppressing their enthusiasm. “We are excited about bringing this Green Line to life and connecting two great cities,” said Mark Fuhrmann, director of New Starts rail projects.

I was 5 years old the last time I rode the rails between the two cities. Back then taking the train from the old Milwaukee depot in Minneapolis to downtown St. Paul was a standard field trip for kindergartners. The train ride lasted only about 10 minutes, and we returned on a bumpy, fume-filled bus that seemed to take hours to crawl through traffic. As I recall, somebody threw up. Nevertheless, the idea that trains were incredibly exotic and romantic remained with me until I had to ride MetroNorth to Grand Central Terminal from the far-flung reaches of Connecticut every single day.

Saturday’s trip on the Green Line was not particularly fast. The train, of course, has to abide by traffic lights in both downtowns. And, in constrast to the Blue (Hiawatha) Line, where the train can pre-empt signals on cross-streets to allow it to sail through an intersection, the Green Line receives signal priority only. A technical sequencing system gives the train first shot at passing through an intersection, but if it is delayed at a station because, for example, crowds are slow to board or disembark (which usually takes only about 15 seconds), the train may lose its window of opportunity to move first. What’s more, the train has to reduce its speed through the University of Minnesota campus to avoid causing vibrations that could ruin scientific experiments.

Still, the train sped up between Western Avenue and the university. Brian J. Lamb, Metro Transit’s general manager, estimates that the full 11-mile trip now takes about 50 minutes, but engineers continue to tweak. Ideally, the end-to-end journey would last no more than 48 minutes, he said. Can you beat that driving from downtown to downtown? Most times, I would say yes, but during rush hours, I-94 turns into a parking lot, and the trip can take as long as an hour and a half. Then, you have to hunt down and pay for a parking space, all of which adds time (and expense) to the trip.

On blizzardy days, the train is bound to be more convenient than a car. It acts almost like its own plow, says Lamb, and Metro Transit plans to have crews on call to shovel out stations. In hopes perhaps of quelling reporters’ criticism, Susan Haigh, chair of the Metropolitan Council, pointed out that many passengers would likely be traveling only partway, say, from the U of M to downtown Minneapolis, or from state office buildings at Robert Street to maybe Snelling. The speed would be speedy enough. 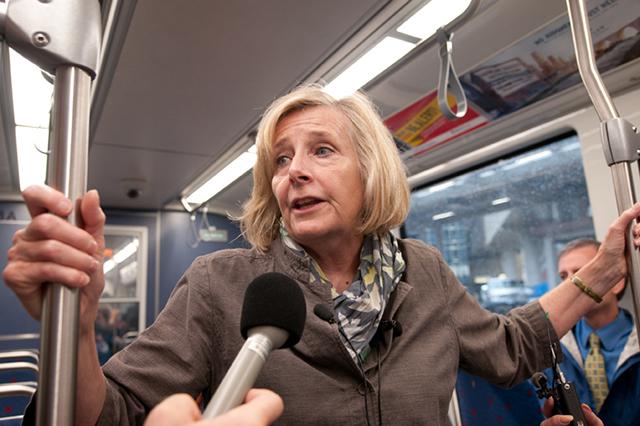 MinnPost photo by Bill Kelley
During Saturday’s Green Line media test run, Met Council Chair Susan Haigh ticked off various projects that the Met Council claims as part of the $2.5 billion in development that has already occurred along the line.

The leisurely run time may frustrate those coming by bus, for example, to Snelling, which eventually will become the nexus of all kinds of bus arterials. The Met Council plans to cover its seven-county jurisdiction with buses, both express and regular, to connect people to the train lines. From long and tedious experience, I can tell you that whenever a passenger has to change from one mode of transit to another, s/he loses time.

Once passengers arrive at the Green Line, however, they’ll enjoy a comfortable trip — assuming that they can snag seats. There are enough for 68 people, though each car can hold a maximum of 200. The cool (and quiet) running will allow them to snooze, read, or, I guess, play pinochle with each other. (There is a message in this for residents living near the proposed Southwest LRT who anticipate being disturbed by the roar of trains bolting by every 10 minutes: That roar is more like a gentle shoosh.)

The trip through St. Paul’s compact downtown, past state buildings and the Capitol, and the portion that runs through the U of M and over the Mississippi offer pleasant vistas. If I had to ride every day, I would look forward to passing those spots. And, if there was any place that might tempt someone to get off the train and shop, it would have to be Washington Avenue, on the U campus. Stores are close to the train, and a good third of the street has been given over to pedestrians.

Downtown Minneapolis, with the now deconstructed Metrodome and barely started Wells Fargo project, is a work in progress. And the stop at Hennepin & Fifth Street, which presents passengers with the sight of an eyesore surface parking lot next to the Cowles Center — well, all I can say is, Betsy Hodges, do something about it! At the final stop at Target Field Station is the new intermodal transit center, where people coming off the light rail, buses and the North Star commuter line will mingle. 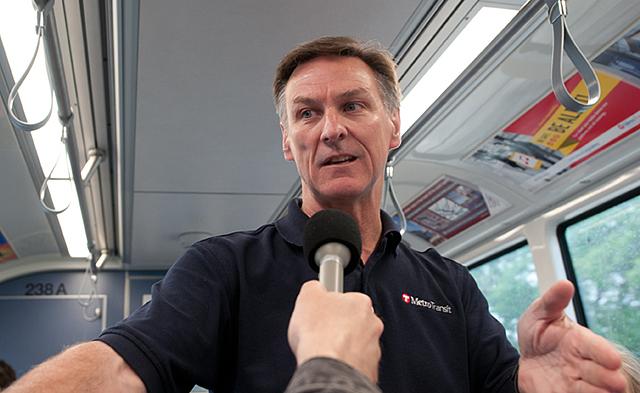 As envisioned in architectural drawings, the $80 million plaza-like development is supposed to boast a lawn, trees and stores, but on Saturday morning, in a driving rain, I saw none of that. Nevertheless, the bones of the new plaza are there, and once MetroTransit adds the frippery, it could become a real place, where commuters could grab coffee, a newspaper, meet others and maybe occasionally enjoy a concert on the Greek theater-like stairs.

To build the light rail, and in hopes of boosting development, MetroTransit had to reconstruct University Avenue’s entire infrastructure, ripping out the old trolley tracks, replacing sewer and water lines and installing new traffic lights. Unfortunately, much of that stuff doesn’t show. Most of the scenery along University Avenue remains pretty bleak, lined with boarded-up stores, random buildings that don’t connect physically or visually to the street, truck farms and industrial properties. As for the section that passes by the big-box stores — I can’t imagine alighting from the train to hike across their parking lot Saharas to do any shopping. Retailers are going to have to start thinking about how to lure passengers in to their stores. Either they will have to rebuild their emporia, placing them closer to the street, or provide shuttles, like those at Disney World, to convey people to their doors.

As we rode down University, Haigh ticked off various projects that the Met Council claims as part of the $2.5 billion in development that has already occurred along the line. The count, however, includes the $400 million Wells Fargo project in Minneapolis, $243 million for Union Depot and millions more in college student housing, which was about the only kind banks were willing to finance during the Great Recession. Many of the projects planned for University Avenue, the portion of the route most in need of regeneration, involve affordable housing, and Haig’s biggest shout-out went to the Project for Pride in Living, which is erecting 108 units of low-income housing on top of retail stores.

The concentration of low-income housing in a low-income area may appease some residents who feared that the LRT would bring higher rents that would force them out. But it infuriates critics like University of Minnesota law professor Myron Orfield, who believes that such development merely intensifies the neighborhood’s ghettoization. He insists that the area needs to attract more middle-income residents who can support the stores and service businesses that the community needs. In the meantime, to be blunt, it doesn’t look as though hipsters are falling all over themselves to buy homes in Frogtown, possibly the poorest neighborhood on the line. 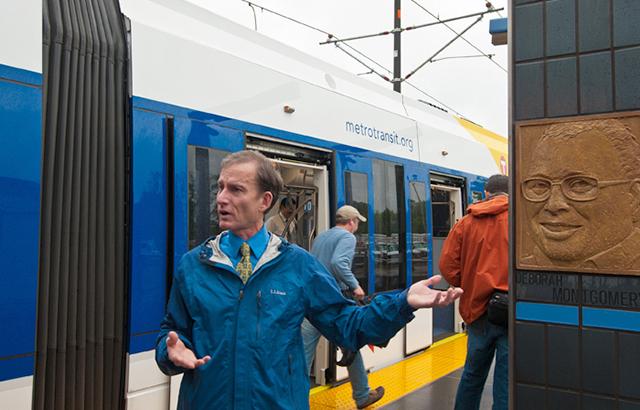 At Victoria Station, in the heart of the Rondo district, which was mostly leveled by the construction of I-94, reporters stepped out of the train to view a display of “public art,” in this case, bronze plaques fixed to the walls that commemorate local notables, both living and dead, which were nominated by the neighborhood. It would have been nice if the plaques had included a little background on these people, like Pearla Mae Barnes, whom even Google couldn’t identify for me.

Stations could use flowers, or a kiosk …

A few weeks earlier, Gil Penalosa, executive director of  8-80 Cities, a Toronto nonprofit consulting group, visited the Twin Cities for a weeklong series of lectures on place-making sponsored by the Saint Paul Riverfront Corporation. After a tour of the Green Line’s new stations, he shook his head and commented that they needed more work. I saw what he meant. Right now, they’re bright and shiny and serviceable, but they’d morph into real places if they had some flower boxes and maybe a kiosk where commuters could buy a newspaper, a cup of coffee or a doughnut — or grab a quick hot dog. You’re probably saying, “C’mon, there are few subway stations in any city in the world that are actually interesting.” That’s true, but the Twin Cities should try to rise above.

Anyway, maybe neighborhoods can take charge of infusing life into the stations. Already seven of the 18 on the Green Line are planning celebrations of this important civic improvement with entertainment and food on the train’s opening day. Festivities kick off with a ribbon-cutting ceremony at 9 a.m. Saturday on Union Depot’s front lawn.