“Downtown doesn’t have any places like that any more … . No 24-hour restaurants, no cheap cafés.”

Some months ago, I was a fly on the wall for a conversation about gritty old 1980s Minneapolis. The legendary founder of First Avenue, Steve McCellan, was telling stories about Hennepin Avenue in the early days of the club, where he booked music acts and spent all his time.

“Everyone used to hang out in the Best Steak House, which was open 24 hours a day. The guy at the Best Steak House used to give me an extra potato and an extra toast because I’d eat there so much. ‘Potato, potato, toast … ’ ” McClellan mimed excitedly. “It was like a ‘Saturday Night Live’ kind of skit. It always worked that way.”

These days, precious few all-night diners of the old school remain in the Twin Cities’ core. St. Paul’s two Mickey’s locations, particularly the prefab 1937 downtown dining car, are the exceptions that prove the rule. And just over each city’s borders, in the quirky burbs of Little Canada and Hilltop, there are the two Flameburger locations, old-school diners open all night. But apart from that, there are only the chains: two Perkins locations and the Lake Street Denny’s.

It’s odd because the all-night diner plays a special role in American cities. Edward Hopper’s famous 1942 painting, “Nighthawks,” shows a glowing diner in New York City where a cook serves up coffee to three quiet customers. Diner scenes are rampant in old movies, often sheltering couples on the run, or offering a hangout for the young and old alike. More than anything, all-night diners were places for people with nowhere else to go, or for groups of people who didn’t want the night to end. But where are the all-night diners in Minneapolis? 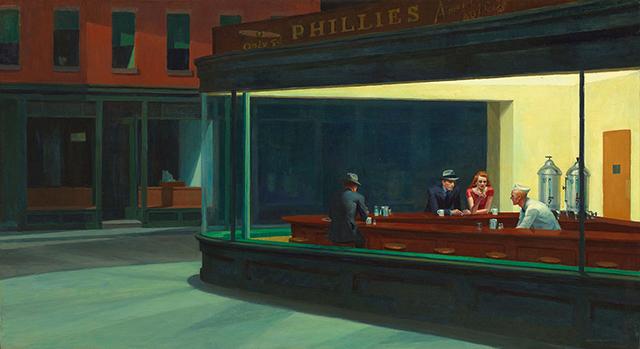 Rhythms of the city

Maybe one answer is that every city, Minneapolis and St. Paul included, has its own unique rhythms. The French sociologist Henri Lefebvre was famous for describing the rhythms of Paris, finding deep meaning in the patterns of everyday life. Looking down at a busy street corner from his balcony, Lefebvre once wrote about the rhythms of a stoplight:

The people produce completely different noises when the cars stop: feet and words. From right to left and back again. And on the pavements along the perpendicular street. At the green light, steps and words stop. A second of silence and then it’s the rush, the starting up of tens of cars, the rhythms of the old bangers speeding up as quickly as possible.

Just like the Parisian stoplight, every corner of our city is ripe with rhythm. There are the natural syncopations: the rhythm of walking, the rhythm of meals and digestion, the rhythm of heartbeats, or early morning birds. Far larger still drift the orbits of our days and years, with all their seasons and contrast. And within these natural rhythms, our more human patterns circulate: the lunch hour, the rush hour, the happy hour, the bleating car alarm, or the tinkle of a twilight wind chime.

And each city’s rhythm is unique, like an urban fingerprint. I like to joke that, if New York City is the city that never sleeps, St. Paul is the city that goes to bed early. Here in the Twin Cities, outside of a few weekend hotspots, our city rhythms seem decidedly diurnal. Restaurants shut up by 9 or 10 p.m., and it was a big deal when “bar close” shifted from 1 a.m. to 2 a.m. back in 2003. Yet in some other cities around the world, like Madrid or Miami, 2 a.m. is still considered dinnertime. Clearly our cities enjoy getting their beauty rest.

Yet as the shifting times illustrate, city rhythms are not set in stone. Earlier this month, Minneapolis hosted its 4th Annual Northern Spark Festival, an all-night art celebration modeled on a similar festival in Montreal. Despite the near-constant rain, this year was a success. Thousands of people wandered the city in the middle of the night, exploring art and culture underneath bridges, in parks, and around our many museums.

“It’s one night; it’s not that bad,” was Sarah Peters’ answer when I asked her why Northern Spark took place in the middle of the night. Peters has organized the festival for the last two years, and argues that staying up all night is one of the main reasons the festival offers such adventure. 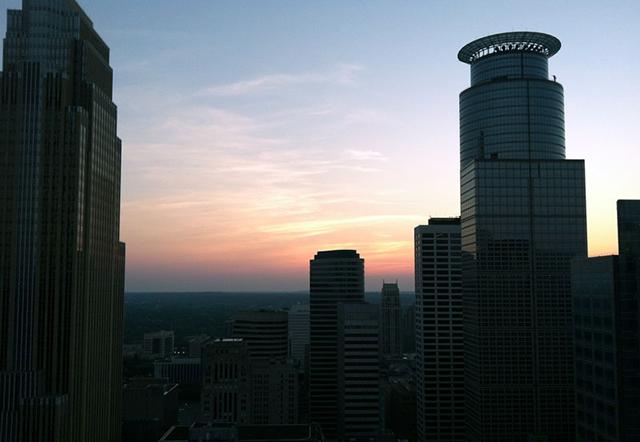 “Dawn is a really important time of the festival,” Peters explained. “From about 10 p.m. until dawn, the night is indistinguishable. But dawn is the moment when you realize you’ve been on a journey. You’ve made it into the next day. In the morning, there’s a shift, and a different sense of time. It feels almost limitless. The timelessness is a special thing.”

Two years ago, I stayed up all night for Northern Spark and watched the sunrise from the top of the Foshay Tower. It was an adventure to be sure, but there was a cost. I’m not as young as I used to be, and for the next few days my head filled with cobwebs. But to have an all-night adventure once in a while, as Peters argues, is to feel “the magic in the night, a way of making a familiar place new.”

Return of the all-night diners?

One of the main challenges of an all-night restaurant is finding the right place for it. For neighbors, the chief complaint is noise. Particularly in the summertime, loud voices and raucous cars conflict with open windows and sound slumber.

For example, St. Paul residents Kristine and Mark Vesley have spent the last few months documenting the late-night activity at the Taco Bell next to their house. As the dozens of nuisance videos show, the Vesleys struggle with chain’s late night hours (where the drive-thru is open until 5 a.m. on Saturdays), and have repeatedly complained to the city and the fast-food company.

But when I asked Kristine Vesley about all-night diners, I was surprised by her positivity. “Late-night restaurants are good!” Vesley told me. “Lots of places start out claiming they will have late hours, and you can count the weeks until they scale back.  We had high hopes that the Frogtown Daily Diner would be at least open till midnight. … But Taco Bell?  Puh. Not a restaurant. Truly a bad taste in the mouth.”

As the Vesleys’ experience shows, places for all-night food should be chosen carefully. Being around a restaurant in the darkest hours of the night is not for everyone. For example, Kim Bartmann, the Minneapolis restaurateur behind Café Barbette and the Bryant Lake Bowl, recently opened a new diner in South Minneapolis. It’s called, simply enough, Tiny Diner.

But the new diner is not open 24 hours; instead it’s what Bartmann calls “a reimagined diner, a place where you just want to go and eat, and are not looking for some Disneyland experience.” According to Bartmann, if you’re running a restaurant, “being open all night is usually not all that worth it.” She reminisced about late-night Minneapolis spots like Little T’s or Professor Munchies. But Bartmann said that, in general, “the Twin Cities don’t have the culture for it. People are winding down by 10 p.m.”

Given their density and commotion, the missing all-night diners of downtown Minneapolis remain mysterious to me. Perhaps as apartment towers continue to rise, the rhythms of Minneapolis and St. Paul will evolve. Thirty years ago, downtown Minneapolis knew how to stay up all night. Maybe in the future, we will again find ourselves nursing potatoes and toast at 4:30 in the morning.

Urban rhythms and the case of the missing all-night diner