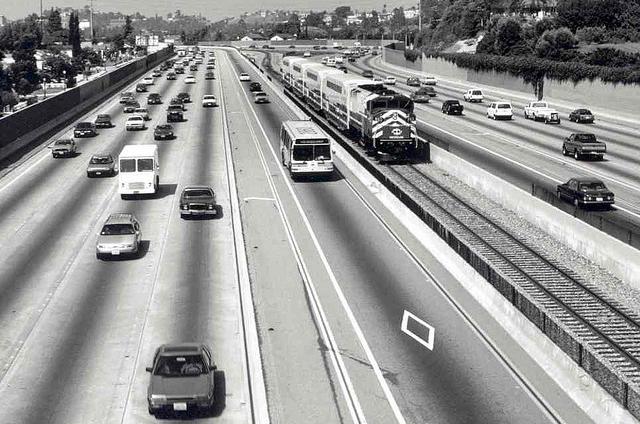 CC/Flickr/Metro Library and Archive
What if our transportation systems, even the highways, operated as highly regulated public utilities?

The Twin Cities had better start thinking up a Plan B to finance its transportation system. Why? Funding sources that exist now may erode or disappear in the near future.

The federal government, for example, pays half of the cost of constructing new mass transit, but that’s down from 90 percent in previous years. If in the next election cycles Congress becomes more conservative, which seems likely, that money could dry up completely. My guess is that neither Speaker John Boehner nor Senate Minority Leader Mitch McConnell want to help build the Bottineau line or finance bus rapid transit from Roseville.

Similarly, Congress seems unable to figure out how to replenish the Highway Trust Fund, which pays for the upkeep and construction of roads and bridges. Its money comes from the federal gas tax, but as cars have become more efficient, its revenues have declined, and it is due to run out of cash this year. Our elected representatives show no willingness to opt for the simple solution: raising the gas tax above its current 18.4 cents a gallon — a levy that has remained unchanged since 1993.

The Minnesota Legislature has also shown little appetite for forking over more cash for transportation. In its most recent session, it allocated to fixing roads a measly $15 million, an amount termed a “bandaid” by MoveMN, a 170-group coalition that offered a modest batch of proposals that would have raised hundreds of millions for trains, buses and roads.

If nothing changes, we will be looking at a future of crumbling bridges, pot-holey roads and halted projects.

David Levinson, a professor who specializes in transportation issues at the University of Minnesota, says that there’s no need for us to live with such shabby transportation or for government to continue shell out bigger and bigger subsidies. In a story recently published on the Atlantic Monthly’s CityLab website, Levinson makes the case for returning to private ownership — kind of. He would like to see our transportation systems, even the highways, operate as highly regulated public utilities.

Not a new concept

This is nothing new, as Levinson pointed out when I met with him in his office last week. Roads, trains and bus systems weren’t always dependent on government. Time was, private companies ran them. They maintained the rights-of-way and collected fares or tolls that covered costs and provided a healthy profit.

That model fell apart with suburbanization, widespread ownership of cars and the development of an efficient highway system — all of which led to declining use of buses and streetcars. Revenues dropped, and owners raised fares to cover costs, which in a death spiral led to still lower ridership, greater fare hikes and so on — until governments were forced to step in to save the systems.

Since then, governments at all levels have had to pour in ever-larger subsidies to keep the systems running. In the U.S. fares pay for only about a third of the costs. Many of the routes are unprofitable, particularly “long-distance, inefficient suburban routes,” Levinson writes. Their losses are paid for by more heavily used urban routes — and by government appropriations. Says Levinson: “They [government transit authorities] run routes that are unprofitable not because they want to but because they’re politically directed to.”

How would switching ownership to a utility solve this problem? Levinson proposes reconstituting MetroTransit as a public utility — let’s call it MetroGetAround or MEGA. It could on its own decide what routes to provide and would price fares at a level that would defray its expenses. If a route proved to be a loser, it would appeal to the Public Utilities Commission (PUC) for a price hike just as Xcel petitions for an increase in electricity rates. Or it could ask the city served by that line for a subsidy to help it come out even. So, for example, if only 50 people a day use the express bus to, say, Apple Valley from downtown St. Paul when 270 were needed for the system to break even, then MEGA could shut down that line. Or the City of Apple Valley, if it truly wanted it, would allocate funds from its budget to support it.

“The subsidy would then be explicit, and people would understand it,” says Levinson.

A utility for highways

He advocates a parallel scheme for highways [PDF]. An entity he has dubbed Minnesota Mobility would enter into a contract with MnDOT to maintain and repair roads and highways. If MN Mobility found the gas tax insufficient to cover its expenses, it would, again, appeal to the Public Utilities Commission to raise the gas tax — taking the touchy decision to hike it away from politicians. The “utility” could also, with the PUC’s approval, adopt other revenue-raising mechanisms — tolls, for example. Or it could set rates according to congestion, requiring drivers traveling at peak hours to pay higher tolls.

Privatizing roads [PDF] is not as novel as you might think. Dozens of governments have in recent years sold public roads to profit-making companies. In 2006, for example, an Australian-Spanish partnership paid $3.8 billion to lease the Indiana Toll Road for 75 years. Chicago sold a 99-year lease on its Chicago Skyway for $1.8 billion. The money went to repay debt and fund road projects.

The public-utility ownership format can offer several advantages, according to Levinson. Decisions on routing would no longer rest with politicians — or political appointees. Instead, the utility would base them on demand and profitability. Eventually, fares would fully cover all expenses — or that’s the hope anyway. MEGA or MN Mobility could also lower costs by opening up routes to competitive bidding for specified periods. London, says Levinson, has successfully managed this with bus contracts let to private companies.

“If the route earns profits, they bid a positive amount,” he writes. “If the route loses money, they bid on how much subsidy is required for them to be willing to operate it.” If the public utility made money, it could float bonds to finance new projects instead of relying on the government.

If the farebox now recovers only a third of the costs of running, say, the light rail, the public utility (or a private company with which it contracted) would have to charge passengers nearly $7 a trip — although Levinson points out that most people would probably buy lower-priced monthly or annual passes. To help the poor pay the freight, Levinson proposes an outright subsidy, almost like an EBT card. That’s less expensive than running routes at a loss, he claims. My fear, however, would be that a $7 fare would drive more people to, sorry, drive, re-starting the old fare decline death spiral — and increasing congestion and degrading air quality.

An overlooked source of funds

To avoid that, a successful system would need more revenue to bring down costs. One overlooked source of funds, says Levinson, might be the property owners along routes. After all, they profit by the public investment in transit, which makes their land and buildings more valuable. One mechanism to dredge money from them would be the value-capture tax, which directs increases in property tax assessments due to transit development to maintaining the line or to reducing fares. Of course, the plain-vanilla property tax does the same thing, I think. As values rise, owners pay more dough — but it goes into a municipality’s general funds rather than toward transit.

A great many questions would need to be answered before the Twin Cities metro adopted such a system. For example, what would happen to poor towns on unprofitable routes? They might not be able to cough up the extra subsidies needed to keep their public transportation lifeline operating.

And would private companies necessarily be able to deliver, say, bus service that was better or more efficient than that offered by MetroTransit? As I recall, private bus lines that operated in the far-flung districts of New York’s boroughs were among the worst elements of the transit system. Owners skimped on service; buses frequently broke down or failed to show up at stops.

Finally, a public utility is not completely immune to political pressure. Elected officials usually appoint board members; it takes only a phone call to exert a little influence. Just think Port Authority of New York and New Jersey. Levinson suggests that legislation could put safeguards to assure that the utility is somewhat insulated from politics — perhaps with staggered terms for board members, which would keep one governor or one legislative body from controlling them all at the same time.

Getting government out of various activities and then operating them “like a business” has been a long-time conservative dream, one that hasn’t always worked out well in practice. Haliburton and Blackwater arguably did not do a more competent job in the Iraqi war effort than the Department of Defense probably would have done — and both companies charged a ton of money. And Medicare Advantage has proven much more expensive than plain-vanilla Medicare, paid directly by the government. For that matter, drivers on the Indiana Toll Road have not given Cintra Concesiones de Infraestructuras de Transporte rave reviews.

Still, given the current state of transportation finance, we should consider every option.

Note to readers: This is my last Cityscape column before taking a break from journalism for a while. Before signing off, however, I wanted to thank MinnPost readers for their attention and for their sharp comments, observations, quips and tips. You folks are without doubt the best and the brightest.

Editor’s note: The MinnPost staff wishes Marlys, a stellar colleague and one of our site’s most-read writers, all the best during her hiatus from regular writing. Cityscape will continue with new contributing writers, beginning Thursday.

What if we made transportation systems regulated public utilities?