Just over a week ago, Maureen Gruntner got the call she was dreading. The cook working late at the Lilydale Pool and Yacht Club was on the phone. “The river is coming up really fast this time,” he told her, and everybody had better get down to the club to start clearing out the first floor.

Gruntner manages the Pool and Yacht Club, the last building left in old Lilydale, down in the Mississippi floodplain upriver from St. Paul. Because of the frequent flooding, the club’s bottom floor is made out of cinderblocks, and the staff worked through the night as the Mississippi rose around them, carrying everything they could out of the doomed room.

“We thought we were safe,” Gruntner told me. The club had flooded in 2001, 2010 and 2011. After the snowy winter, they were worried about this year as well. But because of the string of cool spring nights, the snowpack had melting slowly. The threat of flooding had seemed to recede. 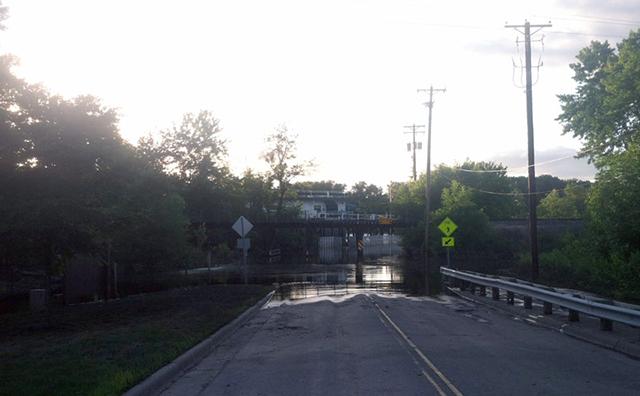 “Then we get hit in the middle of the summer,” Gruntner sighed. June’s endless rainstorms had centered over the Minnesota River Valley, and St. Paul was situated just downstream of the confluence. “It breaks my heart,” Gruntner told me. “I hate it. I hate that my employees are unemployed. The river, there’s no predicting it.”

Back in the 1950s, Lilydale was one of the many marginal Twin Cities’ neighborhoods that scratched the river’s edge. There was also St. Paul’s largely Italian Upper Landing neighborhood, which sat in the shadow of downtown, and Minneapolis’ Bohemian Flats below the bluff on the West Bank. And, biggest of all, the West Side Flats housed thousands of people in the floodplain across the river from downtown.

All of these places were poor and scrappy, full of hand-built homes and short on decent plumbing and electricity. Yet they were also immigrant gateways, the first place of refuge for newcomers to Minnesota who had little else. But as this record-breaking June reveals, living next to the river was a risky game. Each spring, high water flooded the basements and yards of the floodplain neighborhoods, and the 1950s saw the river rise higher than ever, flooding the streets and slapdash homes.

The story is familiar. St. Paul leaders thought of the neighborhood as blighted, and the city’s influential Port Authority viewed the land as an opportunity for industrial development. They teamed up to bulldoze the Flats after the flood of 1952. Almost all the buildings and homes were torn down, and the families forced to move elsewhere.

A few years later, a high levee was constructed to protect the land from future river crests, and the Flats became a light industrial office park: low-slung concrete bunkers, hedges and parking lots, punctuated by the occasional strip mall. Fifty years later, not much has changed. The old riverside neighborhoods have become trivia for historical markers, stories told less frequently with each passing year. 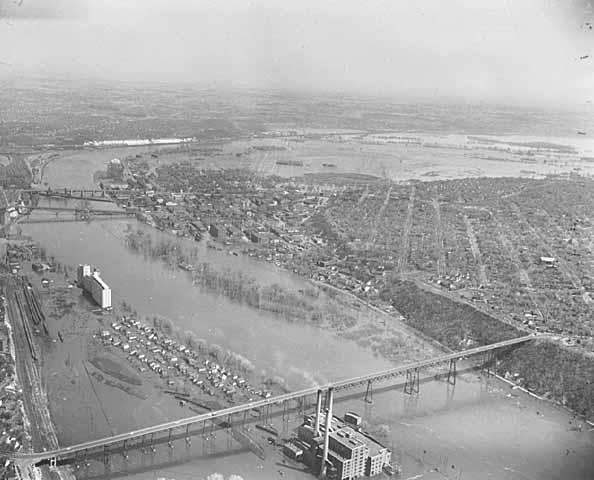 Courtesy of the Minnesota Historical Society
Each spring, high water flooded the basements and yards of the floodplain neighborhoods, and the 1950s saw the river rise higher than ever, flooding the streets and slapdash homes.

Anytime we develop land next to the water, we take a risk. Floods, storms or erosion undermine our designs, and as New Orleans tragically proves, water can act as an unstoppable force. With each technological fix, we increase our risk threshold. For example, flood insurance can create a moral hazard, decreasing risk and paradoxically incentivizing people to build closer than ever to the water’s edge. Levees prevent flooding in some places, but increase flooding pressure on unprotected places. (After all, water has to go somewhere.)

In a way, the river is locked in a struggle with our attempts to control it. We experience natural cycles of disaster and rebuilding, engineering and nature, and the systems become always more complex and interlinked.

Here in the urban river valley, nature and society’s river dance has a special choreography. According to Harland Hiemstra, public affairs officer for the DNR Central Region, “The Mississippi River Corridor Critical Area [which runs through the metro area] was established by executive orders signed in 1976 and 1979 by Governors Wendell Anderson and Al Quie respectively. … Later, in 1988, Congress established the Mississippi National River and Recreation Area, a unit of the National Park Service (NPS). It’s an unusual national park in that NPS owns almost no land. The MNRRA corridor coincides with the critical area corridor.”

Rules deriving from the executive orders of the ’70s require each city along the river to enforce regulations aimed at protecting the river from incursions and potential pollutants. So far, despite the complexities of multiple jurisdictions, these rules seem to be working.

John Anfinson works for the National Park Service in St. Paul. “There’s a constant balance between the river and development,” Anfinson explained to me. They key is understanding the value of the river valley as a natural system, not just as merely convenient property. “If you protect the key values of the river and this corridor, it makes it a better place for everyone,” he told me.

New regulations in the works

But the state government is currently re-writing the rules to make them uniform throughout the Critical Area, and not everyone agrees with the proposed new standards. For example, Michael Belaen of the St. Paul Area Chamber of Commerce is worried that new regulations might harm older buildings that have been operating next to the river for years. The proposed regulations call for setbacks near slopes and shores, at least 40 feet from steep slopes (measured as a 30 percent grade change over 25 feet). Belaen argued that these changes would make existing buildings “non-conforming,” preventing expansion or upkeep for riverside properties.

Meanwhile, Anfinson points to recent landslides in Mendota and Minneapolis as examples of why slope and bluff-top development is problematic. For river development, the devil is in the details. Just as a new house might be balanced on top of the river bluff, we balance development between economic and environmental needs. The trick is to keep the balance without getting wet.

Designing with the river

This summer marks two signs that the long-neglected West Side Flats land might finally be returning to its earlier state, a place where people can live work and play next to both the Mississippi and downtown St. Paul.

The first is a new Sherman Associates project opening up on Wabasha Street, an 170+ unit building that is the first residential project to be built on the Flats in half a century. As Lucy Thompson explained to me, she hopes that the new building will show the potential of the neighborhood, and reveal to developers and potential residents how beautiful the Flats could be, tucked in the river’s bend between the West Side bluffs and the downtown St. Paul skyline.

The second sign of change is the new West Side Flats Master Plan, new planning guidelines set to be approved by the city later this year. Betsy Reveal, a planning commissioner who chaired the recent task force, told me that the plan aims to turn the Flats into an urban village. The plan is aimed at increasing density on the Flats to ensure diversity, affordability and accessibility for people of all ages and incomes.

And as Reveal explained, the plan includes a focus on environmental management. Despite the levee, challenges remain about being down in the floodplain, particularly around the volatile water table. For that reason, the Flats’ new plan envisions a “greenway” running through the middle of the flats that would combine water management with a new bike trail.

“This is about creating about what this neighborhood needs and wants,” Reveal told me. “I want to stimulate people’s creativity and get them to come to the table.”

For decades, despite the protective levee, parts of the West Side Flats have lain vacant, almost a memorial for the old neighborhood that used to sit here within walking distance of downtown St. Paul. Even as the river crests in July, there are signs that things might be turning around.

Developments by the Mississippi bring risks, rewards — and debates