On May 27, it happened again. Two students were crossing Snelling Avenue on the east edge of the Macalester College campus. After a car stopped for them, the two women stepped into the crosswalk. But the next car coming up Snelling sped around the slowed traffic and struck the women, sending  both of them to the hospital. One of the women, Sowinta Kay, 20, suffered a traumatic brain injury and was only recently released.

The problem was particularly frustrating because Macalester College, through a special neighborhood improvement foundation, had focused a lot of time and money installing special crosswalks on this very spot. Tom Welna heads the High Winds Fund, and crosswalk safety is one of his main concerns. “The problem of traffic safety manifests itself on Snelling and Grand, but it is a citywide and metrowide problem,” he told me.

Over the years that he has been working with the Macalester area, Welna has seen many students, employees and neighborhood residents get hit or killed by cars. Welna blames frenetic driving and a culture of entitlement to the public roads, and he has desperately tried to improve driving safety in St. Paul. But so far, as people continue to get hit while trying to cross the street, the efforts have seemed fruitless. A local safety group, St. Paul Walks, recently joined the effort and has launched a citywide campaign to increase awareness of the problem.

The next step for Welna and Macalester College is to redesign the crosswalks yet again. After months of lobbying the Minnesota Department of Transportation, Welna has gotten permission to install a high-visibility pedestrian activated (or HAWK) signal at Lincoln Avenue. Welna hopes that this new crosswalk technique will finally provide safe passage for the hundreds of people trying to cross Snelling.

The tragedy of the Macalester crosswalks prompts the question: Do crosswalks actually  improve safety? 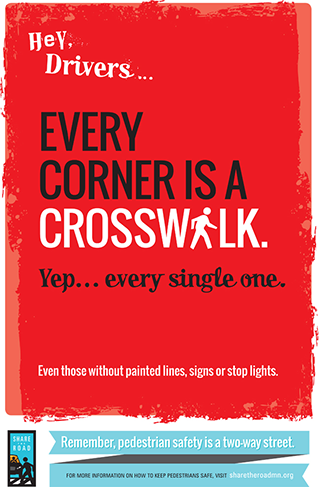 The more you look at them, the more the science of crosswalks is not that simple. At first glance, crosswalks are just some white paint on the asphalt. But, as the recent statewide crosswalk safety campaign will tell you, “Every corner is a crosswalk.”

And within these different crosswalk types, there are many subtle design decisions.

“There are a few general rules of thumb,” Mongelli told me. “If you have to cross 60 feet or more of pavement, you may want to put in refuge islands or other treatments that can break up that crossing. And as far as the style of marking goes, on busier intersections with multilane roadways, uncontrolled crossings or a lot of pedestrian activity, we recommend high visibility markings, like on the Beatles’ “Abbey Road” cover.”

According to Mongelli, high-visibility crosswalks can come in all sorts of subtle varieties, ranging from the basic crosswalk (two simple lines) to “continental” or “piano” crosswalks (thick white lines perpendicular to the traffic lane) to “zebra” crosswalks (white lines at an angle).

Finally, there are different types of crosswalk application technology. Most crosswalks are simply marked with white paint that needs to be repainted frequently. Other kinds of pavement markings might last longer, but are also more expensive.

“It’s a balancing act between not wanting to go back and re-mark them versus not wanting to spend the money up front,” explained Hannah Pritchard, a traffic engineer in Toole’s Minneapolis office. “It’s all a series of tradeoffs.”

Just in the city of St. Paul, as Kari Spreeman in the Public Works Department informed me, there are approximately 1,700 crosswalks. And because of the harsh winter weather, they repaint each one annually, on average, and use two different designs depending on the intersection.

The diminishing returns of signage

Where crosswalk safety really becomes tricky is when you start factoring in the interactions between crosswalks and their surrounding street environment. When faced with a dangerous street crossing, at first glance it might make sense to simply add more signs. But that isn’t necessarily the case. 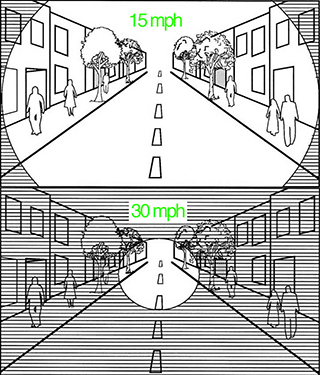 “The faster you’re driving the less you can see,” Pritchard explained to me. “The human brain can only take in  so much information. If you’re going about 15 mph your view is pretty wide. But the faster you go, you have to zero in on what’s in front of you; your brain can’t process everything that’s going on.”

The hard line between speed and perception means that crosswalks cannot be considered in isolation. Instead, their effectiveness is always held hostage to the larger street design, and particularly the “design speed” of any given street. (“Design speed” is the speed for which road details are built, which is not necessarily the same as the speed limit). In other words, no matter how many signs you have, or how much paint you put down, if the road is designed incorrectly, the crosswalk will remain dangerous.

Cindy Zerger is an architect for Toole Design Group, and deals with the human factors of urban design.

“Crosswalks rely on dealing with the design speed of the road,” Zerger told me. “You have to do both hand in hand.” This relationship is why, for streets like Snelling Avenue, where the design speed is higher than the speed limit, building safe crosswalks becomes extremely difficult.

Snelling Avenue is not the only Twin Cities’ street with problem crosswalks. Across the river in Minneapolis, Hiawatha Avenue has been a trouble spot for years as people dart across the busy road trying to reach light-rail stations. In response, the state Department of Transportation recently rebuilt all of Hiawatha’s crosswalks in an attempt to increase safety. 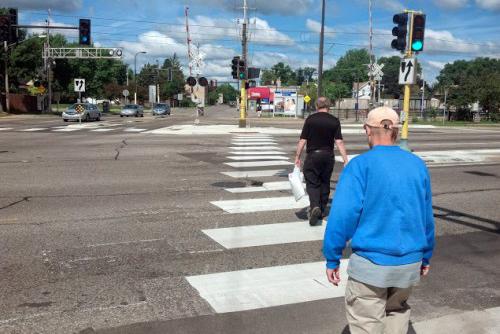 Photo by Sam Newberg — Joe Urban
Hiawatha Avenue has been a trouble spot for years as people dart across the busy road trying to reach light-rail stations.

But without radically changing the design speed of the street, the Hiawatha Avenue crosswalks remain a difficult problem. Sam Newberg is an urban design consultant who thinks the new crosswalks do not do enough to increase safety.

“It’s just like Frogger,” Newberg told me. “Human nature takes over in the pedestrian and the cycling realm, and its every person for themselves.” According to Newberg, while the new crosswalks have some improvements — more median refuges and shorter crossing distances — the street design retains fast-moving corners and long waits at the traffic lights. Newberg doubts it will meaningfully reduce the number of people darting across traffic.

“We need to shift from accommodating pedestrians and cyclists to actually prioritizing them,” Newberg explained. He’d like to see Hiawatha transformed into a slower, more urban street with two lanes in each direction and buildings right up to the sidewalk.

“It’d be a complete change of the street,” Newberg told me, “much more humane. The speeds would be 30 miles per hour, and the crosswalks could be straightened and dignified. When you start to get rid of those crazy highway geometries you can have a much more pleasant environment.”

The question of problem crosswalks has no easy answers. So much depends on the street as a whole. While state law requires all cars to stop for pedestrians all of the time, the real world is not so simple. Next time you reach a crosswalk, take a glance at the paint under your feet. While you’re there, you might also want to check for speeding cars.

Everything you’ve always wanted to know about crosswalks