If you go into any transportation office in the state, you’ll find somewhere a shelf filled with thick books of standards and guides. They offer an alphabet soup of acronyms: MUTCD, AASHTO, NACTO, ITE, CNU, the “green book,” and dozens of smaller municipal design guides. Each of these sets of standards can limit or shape how a city street is built. As a few different engineers explained to me, they act like tools in the engineering toolbox, providing cities with ideas and models for their streets. 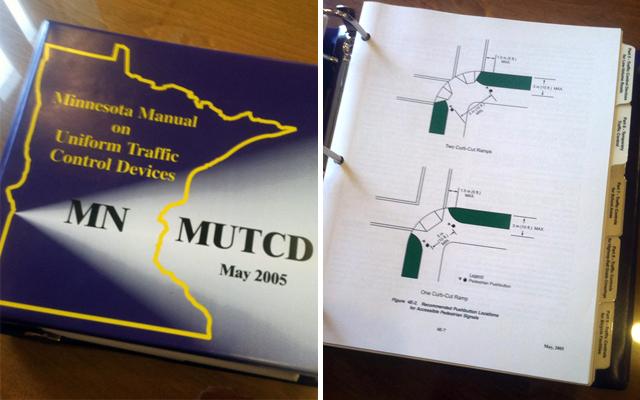 But not all standards are created equal. Some have more influence than others, and which standards a city uses can make a huge difference for how our cities look and feel.

Earlier this year the public works departments of Minneapolis, St. Paul and Hennepin County joined with the state Department of Transportation (MnDOT) to officially endorse the NACTO Urban Street Design Guide, becoming only the fifth state in the country to support to new the engineering manual. NACTO is short for the National Association of City Transportation Officials, and it has for years served as a more flexible set of designs that larger cities around the country can use for more dense urban environments.

“In the NACTO book they include interim designs,” Jon Wertjes explained to me a few weeks ago. Wertjes is the director of Traffic and Parking Services in Minneapolis’ Public Works Department. “NACTO really says that not everything needs to happen because you’re reconstructing the street. Instead, there are some elements that are low cost in the book, to help the goals move forward without having to move a curb.”

Similarly, the NACTO guidelines offer innovative designs that do not yet appear in more common engineering standards, such as the “AASHTO green book” used throughout the country. (The acronym AASHTO stands for  the American Association of State Highway and Transportation Officials.)

Adhering to standards in engineering culture

For lots of great reasons, the field of engineering is closely aligned with standards. They ensure that streets are uniform across the state, and are built to handle certain volumes and weights of traffic. But the way that standards work with actual on-the-ground designs seems to be changing.

Charles Marohn is a professional engineer who practices in Brainerd, Minnesota, and founded a nonprofit group, Strong Towns, aimed at changing how cities are designed and built. For Marohn, Minnesota’s official “State Aid Standards” are a big problem for cities and towns. They require a rigid adherence to high-speed designs for any road receiving state money, meaning that streets across the state are overbuilt with wide lanes that are often unnecessary, expensive and unsafe.

“State Aid Standards are to me the most destructive thing we have right now for cities,” Marohn told me. “Whether it’s a street improvement, congestion, or an intersection with safety problems, we literally turn around and go to a manual and look up what should be there. It seems from the outside like there should be more thought than that, and you should actually go out and study the intersection and do a design. But right now, thanks to State Aid Standards, it’s as rote and as dumb as that.” 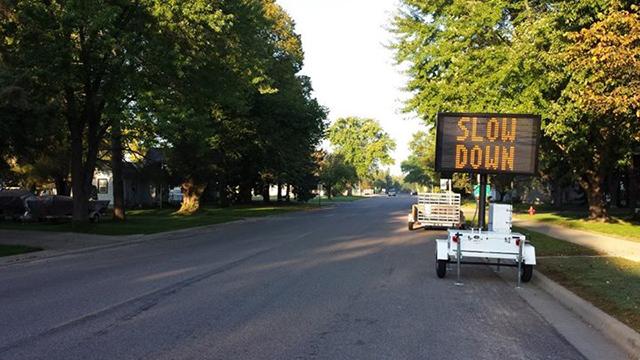 Photo by Charles Marohn
A sign begs drivers to slow down while the design of the street itself sends the opposite message.

“It makes a big difference in our ability to provide wider sidewalks, to calm traffic to add a bike lane or a boulevard tree,” Fawley explained. “We want to spend less money by having a road that is the right size for the right context. All these things are impeded by State Aid Standards, and it’s something that has so much impact over last couple of generations.”

For example, Fawley described how in Northfield, Minnesota, state standards required that a 70-year-old street be expanded from 36 feet to 38 feet. Those rules meant either the removal of crucial on-street parking or a time-consuming variance process. (The city of Northfield decided to go for the variance, and received it after a few months.)

Likewise, according to Fawley, when the City of Minneapolis wanted to change South Lyndale Avenue from a four-lane to three-lane street, Hennepin County engineers were reluctant to approve the plan because it violated State Aid Standards. (The change finally took place after a 10-year delay.)

“The research certainly does not prove that there’s a correlation between lane width and safety on these lower-speed streets,” Fawley told me. “Often what happens with wider lanes is that people drive faster or pay less attention. Research does not show that there is a difference in safety. Instead, there’s a tot of evidence to suggest that we spend a lot of extra money and extra time.” 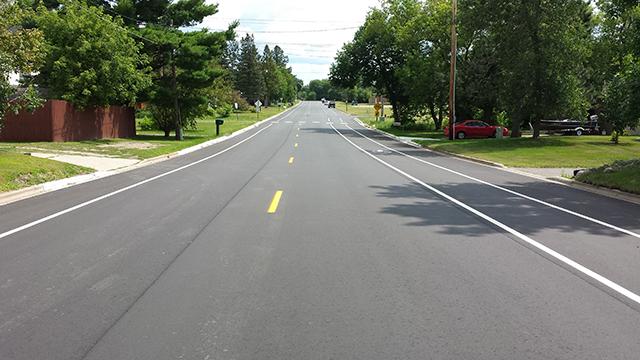 Like most engineering problems, figuring out how to solve the problem of engineering standards is complicated. Fawley suggests changing Minnesota law so that cities would be able to “opt out” of using rigid state standards.

On other other hand, Marohn believes that Minnesota should simply do away with the State Aid system altogether.

“I would eliminate the entire State Aid system,” Marohn told me. “It’s broken and I would get rid of it tomorrow. We would be much better off. If state government still wants to fund local transportation projects, I would do that with block grants. We have licensing for engineers. They are intelligent people, and they can figure this out. Let’s leave design to local officials, to do what is best for their community.”

But any change to State Aid Standards would have to happen at the state level, where Sen. Scott Dibble heads the Senate Transportation Committee.

“State Aid Standards are ensconced in rule and hard-wired,” Dibble told me this week. “There’s no reference to a design manual, and so I’m interested in figuring out how we can crack that nut and allow for references to other design criteria and design priorities. I don’t know exactly how to go about it, but AASHTO is no leading edge. It’s the professional organization of commissioners of transportation, headed up by engineering professionals.” 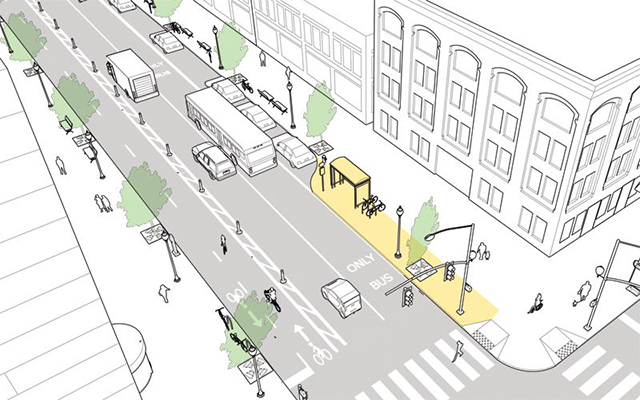 Meanwhile, public works departments in Minneapolis and St. Paul, and in counties throughout the seven-county metro area, are still working on developing new design guides. In addition to the recently adopted NACTO design guide, Minneapolis adopted its own city design guide in 2008, called Access Minneapolis.

Likewise, across the river, the city of St. Paul is developing its own citywide “Saint Paul Street Design Manual.” The new guide will outline city designs for streets that accommodate all users, including pedestrians and bicycles. (The new manual will go through review by neighborhood groups and city officials before being officially adopted later this year.)

But these new design guides are only successful if they are used in the real world. For State Aid roads, which run through every city and town in Minnesota, it remains very difficult to built a roadway exactly the way cities want to. With NACTO, “Complete Streets,” and a host of other guides, cities will have more tools in their toolbox. It remains to seen if they’ll be able to use them.

Seeking flexibility amid the invisible hand of street design standards