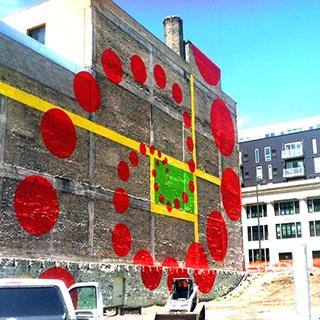 “I call it the Urban Flower Field,” Amanda Lovelee told me. “It will someday become Pedro Park, but up until a month ago it was a gravel pit with a lot of weeds.”

Amanda Lovelee is an artist in residence for the City of St. Paul, a program sponsored by Public Art Saint Paul that places artists inside the city’s Public Works Department to collaborate and create public art projects. And Lovelee’s latest project is the Urban Flower Field, a brand new “temporary park” at the site of the former Pedro’s Luggage in Downtown St. Paul.

The idea for the park came from Lovelee’s conversations with St. Paul Parks and Recreation. When Pedro’s Luggage closed down, the owners donated the land for a city park. But that park is still two years away from construction, awaiting the demolition of the building next door. In the meantime, the site lay vacant, gathering dust and entropic litter.

“When these spaces lay dormant, it leads citizens to feel a bit hopeless,” Lovelee explained. “I’m hoping this project is a good way to show that with a lot of great partners, big dreamers and a little bit of money, these spaces can be active and gather the community to come together.”

The Urban Flower Field is an example of tactical urbanism, a trend in urban design that emphasizes short-term, improvisational change in cities. Tactical urbanism offers a set of tricks or experiments that range from replacing on-street parking with pop-up patios to experiments with street design. (The most famous example is the pedestrianization of Broadway in New York City’s Times Square; it began as a short-term experiment before becoming popular and permanent.)

The great benefit of tactical urbanism lies in its contrast to the often drawn-out planning and implementation procedures for most public projects. With most parks or developments, lengthy planning, funding, community engagement and implementation processes can last for years, trying the patience of even the most engaged citizen and city workers. Temporary tactical projects are typically planned and built in just a few weeks or months.

For example, Lovelee’s park happened almost overnight. The city and an arts organization found $40,000 for a two-year park installation, and with some creative help from the University of St. Thomas and the local arts community, Lovelee’s Urban Flower Field was born.

In my explorations of short-term projects around the city, one common refrain kept rising to the surface. Because temporary parks happen so quickly, they often require collaborations. They bring people together to work on building something new.

A great example just appeared in Minneapolis’ Prospect Park neighborhood, right next to its Green Line light rail station. Cornerstone Group, a local developer, had purchased an old industrial site, and has plans to build a mixed-use building next to the LRT station. But that development is two years away, and in the meantime they saw an opportunity to use the space for something positive. They contacted Saint Paul-based Springboard for the Arts, and after a late-winter meeting between an arts organizer, the local neighborhood group, a community garden, and the nearby Textile Center, the Prospect Park Community Garden was born. 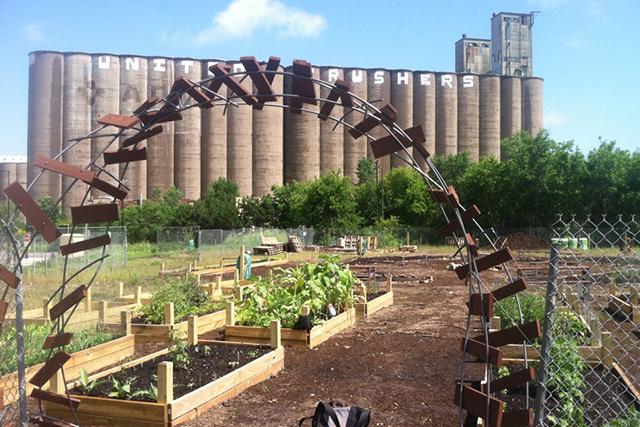 Within a few months, the site has literally grown up. Today there are individual raised garden beds, a fire pit, artfully designed fences and tables (with railroad themes), a “dye garden” growing plants used for fabric colors, and a bee hive installed by the Beez Kneez (a local beekeeping educational group).

“From the start we knew that this is not a permanent space,” explained Cedar Phillips, the office manager for the Textile Center. “We wanted to be up front about that because sometimes community gardens feel like they’ll be there forever. We felt like two years was long enough to devote time to getting it going.”

And so today, the vegetables grow and the train rolls past. The Textile Center is planning a bunch of activities in the garden over the next few months, including a community felting project and public dye sessions.

The challenges of temporary urbanism

Judging by these kinds of stories, temporary urbanism seems like a win-win for developers, neighbors, and artists alike. But if it is so successful, why doesn’t it happen more often?

One of the key problems is that many property owners remain understandably reluctant to work with short-term partners. For obvious reasons, most would prefer to simply sell or develop property once and for all, rather than deal with the logistic complexity of working out short-term leases and liabilities.

For example, during the three-year light rail construction period along University Avenue, local placemakers Ben Shardlow and Kristen Murray spearheaded an effort called the Starling Project, aimed at catalyzing “pop-up businesses” in empty storefronts along the street. But, as they learned during the project, matching properties with short-term uses presents a difficult challenge.

“Creating a match that works for the person who is using the space and the person who owns or manages the space is just flat out tricky,” Shardlow told me. “You need a space for a least 90 days to go through all the liability issues, and get the license and lease agreements signed for the space. And once you do that, you really need a user who can commit to making effective use of the space. If they’re only in there occasionally it doesn’t create a lot of community benefit.”

Similar challenges have confronted Joan Vorderbruggen, who has been installing “pop-up” art in windows in Minneapolis’ Whittier neighborhood for years. Today, both Shardlow and Vorderbruggen have found homes installing temporary urban projects in downtown Minneapolis. Shardlow now works with the Downtown Council on tactical placemaking,” while Vorderbruggen has been working with the Hennepin Theatre Trust to focus on improving the streetscape along downtown’s main street.

“I could go on for days about surface parking lots in dense areas, and how problematic they can be for the experience of walking down Hennepin Avenue,” Vorderbruggen explained. “What can you do to keep those spaces functional but make them more inviting for people who are walking along the street?”

After installing a successful series of art installation in the windows of the vacant Block E building for the Made Here project, Vorderbruggen’s latest project is a textbook case of tactical urbanism. She’s transformed a surface parking lot into a temporary park called the “Parklot,” composed of recycled pallets and highly engaging paint colors. The temporary park space is the first what she hopes will be many more to come in downtown Minneapolis. 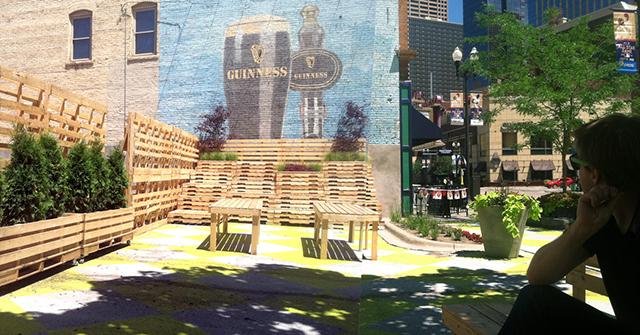 One of the paradoxes of temporary urbanism is that, even if the project is a wild success, temporary parks remain designated for the dustbin of history. Other than a few street experiments that might become permanent (like Times Square), the practical bargain of pop-up parks is that they eventually get developed and disappear.

That’s the likely fate of most of these Twin Cities projects as well. Both the Prospect Park Community Garden and the Urban Flower Field are on two-year timelines, and will eventually be nothing more than memories.

“It will be hard to see this go,” Cedar Phillips told me while standing in her community garden. “But it’s also exciting to see Prospect Park develop. This neighborhood has so much potential. If everything happens that people are envisioning it’ll be a great place. A different stage of Prospect Park’s life.”

In the meantime, in vacant lots all around the city, temporary parks keep popping up like wildflowers. Stop and smell them while they last.