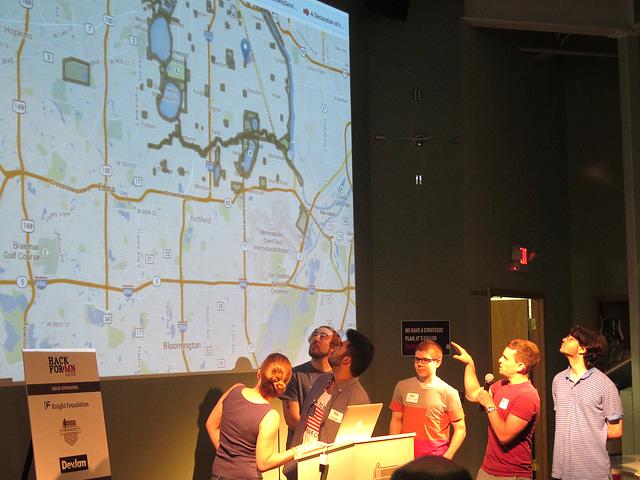 “I want to see a clear voting history for the City Council and all the city boards.”

“I’ve been trying to get bike/pedestrian crash data on a publicly accessible website, with no success.”

“Some open data advocates are peeved that police crime data is only made available to a third party who puts out a mapping utility. We want the raw data, so we can cross-reference it.”

Over the last week, I’ve been asking a few colleagues about Minneapolis’ new “open data” policy, passed recently by the City Council. I was wondering what kind of data they’d like to see made available by the city. 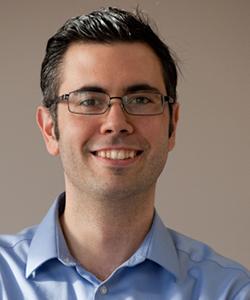 “We just passed an open data policy, the 16th city in the nation to do so,” Ward 12 Council Member Andrew Johnson told me. “It’s something where I’ve been campaigning for it, and am proud to see it passed. Minneapolis should have a portal up at the end of the year, so that data sets will be posted online.”

Open data is a movement that combines government transparency, bottom-up crowdsourcing, and high-tech geekery into an unpredictable stew of numbers. But for many government agencies and institutions, the idea of making data available to the public represents a big shift in culture. For example, while public information has always technically been available, traditionally anyone wanting access to it had to jump through significant hoops (called FOIAs, or Freedom of Information Act requests). Instead, Minneapolis’ new open data policy encourages city data to be made accessible as a basic principle.

“This new policy fixes the paradoxical relationship that exists with data right now,” Johnson explained. “Because data is not open, the only time departments have an experience with data is when it’s being used to embarrass the city. But by putting it out there it fosters an era of transparency and collaboration and opens up to positive experiences. It’s the people’s data, and it should be out there.”

Nice Ride, the Twin Cities’ bike sharing nonprofit, offers one example of the challenges and benefits of having an open data policy. Since its inception, Nice Ride has made its ridership and user data available each year on its website. The idea behind this, according to I.T. Director Mitch Vars, was to make the most out of limited staff time.

“If we release this stuff, it’ll be put to good uses that I’m never going to have the time staff and budget to do,” Vars told me. “Open data is a two-way street where you give the public a voice, and they do some of your work for you. If you supply them with the raw information, maybe they’re going to be able to increase your capacity at no cost to the public.”

For example, Nice Ride data has proven to be popular with both academic researchers and the computer-savvy data visualization crowd. Two years ago data visualization experts created beautiful maps showing “A day in the life of the Nice Ride system” on this very website. 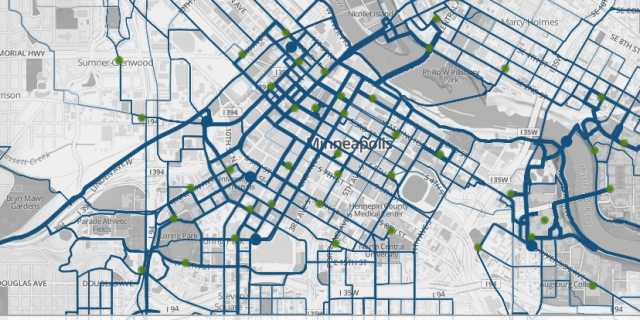 MinnPost
“A day in the life of the Nice Ride system”

At the same time, it has not always been smooth sailing for the Nice Ride data sets. Back in 2012, Vars had to tweak some of the public data when it revealed too much personal information.

“Initially my take on it was that my system generates tons of numbers and other things,” Vars explained. “I wanted to make as much of it public as possible, and I thought we would do it until we got some push-back. We used to release our records with the unique ID of the renter so that you could connect trips together. Well, it took a little while for people to realize that you could probably identify people based on their behavior. Since then, we’ve taken that out.”

“Minneapolis is doing a pretty good job,” Andrew Owen, a transportation researcher for the Accessibility Observatory research group at the University of Minnesota, told me. However, Owen explained that there are still some things that the city has to work on — for example, data formatting.

“Data format can be an important question when it comes to data openness,” Owen told me. “There’s a big difference between those data where I can download the file, but if I don’t have the software to read, and have to buy expensive software, then what is the point of downloading it?”

At the same time, formatting data to make it usable can be a time-consuming process that might turn into an expensive sinkhole for time-strapped city staff. That’s one of the worries that some elected officials and department heads raised during the debates this week at the City Council.

“That was one of the concerns by Public Works,” Council Member Johnson told me. “They were worried that they would  have to pour a lot of staff time into being proactive by putting data out there.”

But according to Johnson, the potential benefits of crowdsourcing some city services outweigh the initial costs of making city data public. Bill Bushey is one of the founders of a group called Open Twin Cities, which focuses on using data to connect the public to their city.

“This actually enables the city to function more efficiently,” Bushey told me. “One of the most common things that we hear from the city staff discussion is how difficult it is to access data in other city departments. Having it all in one place for anyone to access makes it easier for them to do their job. And on the private side, the best case scenario is that you start seeing organizations create technology based on this data that informs the public about city services, about events happening in the city. Businesses and startups could potentially grow out of this.”

The hidden world of proprietary data

Another often overlooked angle to urban data is how valuable some of it can be. Companies like Google or national data firms like INRIX make millions by providing transportation and consumer data to companies. According to Andrew Owen, the next step for Minneapolis would be to begin leveraging the data generated within city boundaries for use by the broader public.

“I’m talking about the city taking more ownership of the data that is generated within its limits,” Owen explained to me. “There are lots of people out there profiting from it, and in some cases the city ends up paying for the same data on the other end!”

Foe example, Owen described to me how the city might require taxis or other vehicles (like Lyft, car2go, or Uber) to make their everyday GPS data available online. This would make Minneapolis traffic information publicly available for the first time, and provide an invaluable set of geographic information that researchers, writers, and interested neighbors could use to understand Minneapolis’ city streets

“If we had the GPS traces of where and how fast vehicles are going, and how fast they’re going,” Owen told me, “we could aggregate all the information up. We could know what the speeds are, and attach that to the already existing open road data format like open street map. Suddenly the public sector has made an invaluable addition to the road database.”

The future of open data in Minneapolis

For right now, Minneapolis is still in its initial stages of embracing open data. One of the key pieces of last week’s vote was a “compliance policy” that will require city departments to produce reports on how much data they’ve made public. (In a sense, the city will be producing new data about its existing data.)

Because of this two-way relationship between the public and the city, one of the exciting and frightening aspects of open data policies is that the results can be unpredictable. Nobody knows how the public is going to use the data once it’s made public.

“Its not a panacea, “ Mitch Vars explained. “It could be that Minneapolis makes data public and nothing comes out of it for three years. But I don’t see a downside to that. It gives people a way to be more interested and engaged in the workings of the city. Right now, everything is a closed-up bureaucracy. We can expose this stuff, and make beautiful pictures of it.”

Groups like Open Twin Cities have already had half a dozen “hackathons” and “meet-ups,” where they bring together neighborhood activists and programmers to generate new ideas for using city data. Together with community activists and researchers like Andrew Owen, if Minneapolis can figure out how to make its data useful, anything might happen. At the very least, the future of Minneapolis will be an interactive one.

Embracing open data: a big shift in culture for Minneapolis