The Twin Cities are famous for their culture of volunteerism, and each city has a unique civic engagement system. St. Paul’s geography is organized into 17 district councils dating back to the 1970s, while Minneapolis has a more complex map of more than 80 distinct neighborhoods, each with their own official groups.

And as any developer knows, these neighborhood groups are a required stop when trying to build in Minneapolis or St. Paul. Without the stamp of approval, it can be a nearly impossible road for a new building or project. It seems like a great example of democracy in action.

For the past year, John Edwards, a self-described “descendent of homeowners,” has attended his local meetings of the Lowry Hill East Neighborhood Association. He quickly became frustrated that his local board was dominated by homeowners.

“These groups end up being homeowners’ associations,” Edwards told me. “Sure, there’s a place for that. They live in the neighborhood, and have the right to have their views represented. But what bothers me is when they claim a mandate from the neighborhood — that they’re this democratic voice of the people, when 85 percent of the neighborhood is renters.” 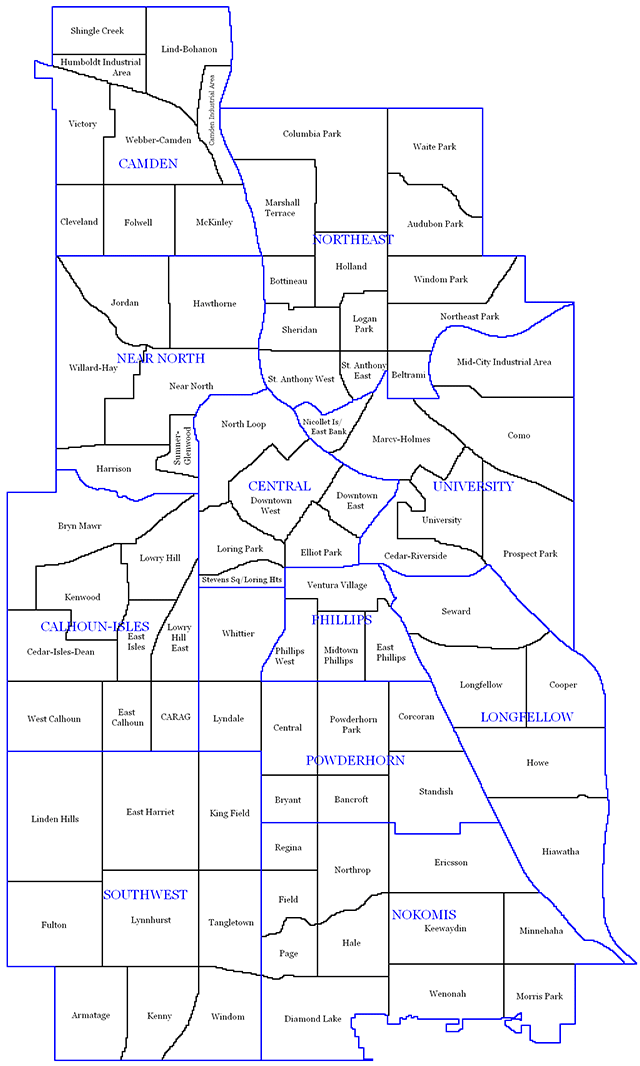 There are lots of reasons for neighborhood groups’ lingering problems with representation: language barriers, child care needs, or simply the fact that working people lack the time to spend hours attending lengthy meetings.

At the same time, there might be structural problems with the neighborhood group system. Back in the 1990s, Minneapolis’ neighborhood groups were fueled by the city’s innovative Neighborhood Revitalization Program (NRP), which gave money directly to the groups for capital improvement efforts. Uniquely in the country, citizens could decide for themselves how to spend city money.

But the NRP system also led to problems. Ross Joy is the lead organizer for the Corcoran Neighborhood, and blames the NRP system for focusing on homeowners at the expense of Minneapolis’ renters.

“Those funding mechanisms were targeted primarily, 110 percent, for homeowners,” Joy explained to me. “There should be no surprise that that our neighborhood associations were set up to have really high engagement around homeowners and not renters.”

While the NRP program has changed today, some neighborhood groups have found outreach to be challenging. For example, David Brauer (a former MinnPost writer and a Southwest Journal columnist) spent years in the ’90s and 2000s working with the Kingfield Neighborhood Association. One of his longstanding goals was increasing participation of renters and people of color.

According to Brauer, increasing participation is almost impossible with a shoestring budget. And because they didn’t have large areas of poverty, the Kingfield neighborhood had difficulty getting grants that might have helped.

In conversations about cities, many people think renters are a “transient” population and that they simply don’t care to get involved in the community.

“The dominant narrative is that residents who rent are not engaged in the neighborhood and have no interest in community building,” Ross Joy explained to me. “People say that renters are a detriment to the neighborhood, or that they bring unsavory elements and are transitory. I’m of the opinion that all those things are not true.” 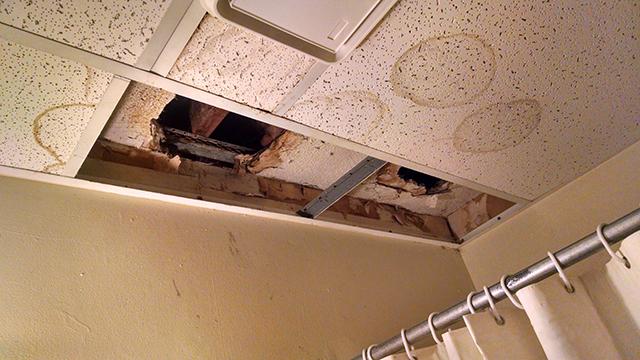 Courtesy of Corcoran Neighborhood
An image of the leaking ceilings at an apartment complex in the Standish-Ericsson neighborhood.

In the United States, homeownership has long been synonymous with good citizenship. In the 1930s, policymakers believed that debt-laden homeowners would be unlikely to go on strike, and during the ’50s, homeownership was seen as an economic driver of a broad range of consumer products. Thus for a slew of political and economic reasons, U.S. policies are littered with benefits and subsidies that encourage homeownership.

But both Minneapolis and St. Paul remain bastions of rental housing. Yet, as Karen Boros pointed out last year on this site, despite representing over half the population, renters are a minuscule part of Minneapolis’ official groups and commissions.

There’s no doubt that reaching out to renters is difficult work. Ever since she joined the Standish-Ericsson Neighborhood Association (SENA) board a year ago, Melissa Hysing has been trying to engage renters in her neighborhood conversations. A few months ago, the SENA board did a survey that identified the geographic and demographic diversity missing from their existing community group.

“Our board is 100 percent homeowners,” Hysing told me. “We found that people under 24, or retirement age, or people of color, renters, and single parents were underrepresented. [Likewise] two-thirds of our board members live south of 42nd Street, and a lot of us are clustered around Lake Hiawatha. We clearly had much less representation from the geographic areas in the north and west, and near the light rail.”

In response to this disparity, the Standish-Ericsson board enlisted a half-dozen volunteers to knock on 400 doors, trying particularly to target renters. Hysing’s advice on talking to renters is pretty simple: Ask open-ended questions, be willing to enter apartment buildings, and raise the courage to overcome cultural barriers. It also helps to speak Spanish or other common languages of the Twin Cities’ immigrant communities.

For Hysing and Joy, bridging the barriers between renters and homeowners brings new issues to the foreground. In the Standish-Ericsson and Corcoran neighborhoods, common concerns included holding landlords accountable for building maintenance, increasing library hours, and rethinking how utility bills are divided in the city. Thanks to the hours of grass-roots conversations, Hysing and her colleagues have been able to begin actually represent the whole of their neighborhoods.

In my neighborhood on St. Paul’s West Side, Rebecca Noecker is one of the board members of the West Side Community Organization (WSCO), which is applying for a grant aimed at outreach to Latinos and renters.

“Outreach is hugely important because we are supposed to be representing the views of a community, and those views are never as homogenous as we think,” Noecker told me. “We’re bad at doing it because we don’t do it on an ongoing basis.”

Noecker argues that the “western way of doing things with committees and bylaws and procedures” doesn’t engage a wide range of people, and is applying for a grant that will help the neighborhood with other, more decentralized approach to engagement that might involve fewer meetings and more hands-on projects.

But based on his experience in the Kingfield neighborhood, David Brauer remains skeptical that much can be done without money.

“I don’t want to say there’s no hope,” Brauer told me, “but I’m a little skeptical about getting the meetings out of the park building. We had tons of events that we thought would be good organizing efforts. There needs to be more appreciation of the fact that one of the fundamental barriers to representation in neighborhood organizations is that it’s a lot of work.”

In the Corcoran neighborhood, Ross Joy has helped start an official “tenant’s council” focusing exclusively on renter issues, and hosts a regular “tenant organization” meeting to help other neighborhood groups learn about engaging with renters.

Back in Lowry Hill East, John Edwards started a blog (complete with infographics) aimed at revealing the disparities between his neighborhood group and its renter-dominated neighborhood. He likely won’t stop until there is a greater renter representation on the board. But at least in Minneapolis, neighborhoods like Corcoran and Standish-Ericsson prove that it can be done.