How many times have you thought about what’s underneath your shoes and tires? If the engineers had their way, you’d never think of about pavement at all.

“We don’t expect that the public would care,” Steve Lund told me. “They just want a smooth driveway or sidewalk, and it’s our job just to go behind the scenes to do that.”

Lund is a pavement engineer for MnDOT, which is (of course) the state’s department of transportation, with a massive budget and responsibility for the majority of the lane miles in Minnesota.

Zoom in on the pavement underfoot, and there’s a complex world of rocks and water that has huge impacts on your city’s budget, the quality of your stroll, the lakes and rivers all around us, and (of course) your car’s transmission.

Once you start talking to people about about pavement in the Midwest, you immediately find a schism.

“There are two types of pavement, concrete and asphalt, and these industries compete with each other,” explained Lev Khazanovich, an engineering professor at the University of Minnesota. “Each is always trying to improve their product, and so asphalt and concrete in Minnesota are much better than what was built 30, 40 years ago.”

The difference between the two pavements comes down to cost and lifespan. Concrete is harder and more durable, but asphalt is cheaper. In fact, considered philosophically, these two technologies might even be diametrical opposites.

Concrete is composed of water, aggregate and cement (with occasional other kinds of material, such as coal ash from coal power plant filters). The chemical reaction between cement and water causes it to harden. It can thus be molded, like plastic, into a seemingly infinite variety of shapes.

Asphalt, on the other hand, is a form of petroleum mixed with aggregate (mostly sand and gravel), heated up and then pressed down to form our roads, bike paths and parking lots.

Because Minnesota is a “continental climate” located very far from the moderating effect of oceans, our temperature extremes are some of the widest in the global north. And as any springtime driver knows, as water repeatedly freezes and thaws during our winters, it poses huge pothole-shaped problems for our pavements.

“The climate extremes are the number one dilemma we have to wrestle with,” Steve Lund said. “With extreme cold contraction we get brittleness, and with extreme heat we get expansion. That brings the buckling and the potential softening of the asphalt.”

Because of our climate, pavement in Minnesota has to be tweaked and modified to handle the pressure. For example, the “Minnesota mix” of concrete typically has less water than the mix used in other states, in order to minimize the potential exposure to expanding ice. And this means that Minnesota engineers have to be on the cutting edge of pavement techniques and technologies.

“MnDOT is one of the most technically competent, innovative and educated transportation departments in the country,” Kazanovich said, referring to their attempts to deal with our extreme climate. “The more water you place in the concrete, the more porous your concrete, and in this case, its resistance to freezing would be much lower. Our pavements are placed with special machines which allow for very stiff mixes more resistant to freezing and thawing.”

As it turns out, water is the key variable in the world of pavement. Not only do engineers worry about it freezing and thawing, pavement has a huge impact on our water systems because it affects storm water runoff. Each time it rains, all the roads, sidewalks and parking lots channel water away from soil and into storm sewers, lakes and rivers — with all kinds of consequences.

A full exploration of the storm water situation will have to wait until a future column. But you can’t really think about pavement without considering how it affects water, and that has led to one of the big trends in pavement: pervious paving. There are really two types of connected technologies here: permeable pavers and pervious pavements. (Say that 10 times fast!)

“They can be standard brick pavers with spaces between them, [or] they’re special permeable pavers that have spaces built into the actual brick or paver unit so that water can flow in between the gaps,” Kumka continued. 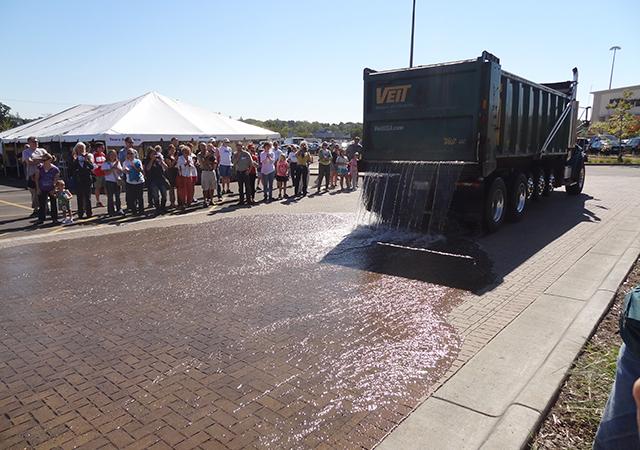 Similarly, pervious pavements refer to concrete or asphalt that has more porosity built into their surfaces, that allow for water to flow into the subsurface soils underneath. For example, here in the Twin Cities, Shoreview has built a network of pervious concrete roadways that are the most extensive system in the metro area.

“There are several different types of pervious concrete,” explained Nathan Campeau, another engineer at Barr. “It has been around for quite a while now, 10 to 12 years, and installed in several locations around the state. And there’s a corollary in porous asphalt, special mixes that have a lot of void spaces in them. They’re basically like a sponge, and allow water to go from the surface down to the sub-grade below the pavement.”

While the benefits of new pervious pavements are clear, they also present technological challenges. First, it can be tricky to install them, and they require specific equipment and time-consuming construction processes. Many contractors struggle with pervious technologies when using them for the first time.

Second, cities like Shoreview have to carefully maintain their pervious pavements, so that sediment and grit does not clog up its “void spaces.” To do this, cities and property owners have to actually vacuum the sediment out of their pervious roads and parking lots.

“Permeable pavers are a little easier to maintain in terms of getting sands and silts out of the spaces between the blocks,” Campeau told me. “It’s easier to vacuum that out than vacuum out the silt that migrates partway through the porous asphalt or pervious concrete.”

Because of the clear environmental benefits of permeable techniques, the new pavements are appearing in lots of parking lots and sidewalks around the state. For example, the Green Line along University Avenue has an extensive system of permeable pavers and catch basins for water that will allow for trees to grow and prevent rainwater from running directly into Saint Paul’s lakes and rivers.

The future of paving surfaces

Even though it seems invisible, the world of pavement has been changing for years. In St. Paul and Minneapolis, you can see some of the different eras of pavement as you drive or walk around the city. Many of St. Paul’s older historic districts (like Cathedral Hill) retain some of their original brick pavers, though most of these have been replaced at great expense over the years.

Likewise, industrial neighborhoods in both core cities have concrete streets that can be decades old. And until recently, Duluth still had century-old pavements made from hard stone. 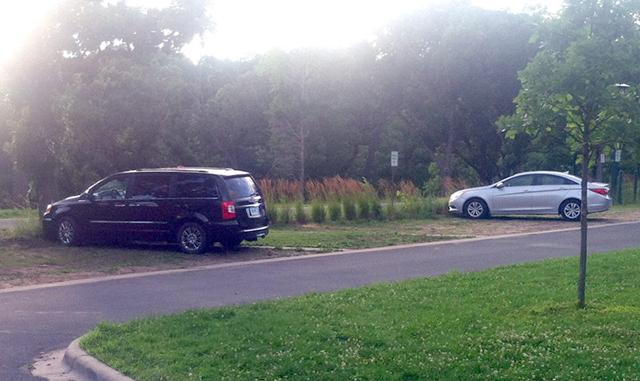 While the asphalt and concrete used in reconstructed roads might seem the same as a road from a few decades ago, underneath the tires there are a lot of differences. On the one hand, roads are becoming thinner as new asphalt and concrete technologies are developed that last longer and require less maintenance. Similarly, newer roads are often quieter than roads built a few decades ago.

“In the past, concrete roads could last a long time, but they were noisier,” explained Kazoanovich. “By changing the pattern of the texture, MnDOT is working on making them much quieter. [Steel] dowels reduce bumping noise significantly.”

I also talked with Rebecca Embacher, an advanced materials and technology engineer for MNDoT, who told me about new technology trends at the agency. MnDOT is developing “intelligent compaction rollers” that use GPS technology to ensure uniformity so that, as Embacher explains, “uniformity in our compaction efforts [that avoid] lower density measurements.”

Similarly, MnDOT has been working on developing new thermal profiling technologies that can very accurately measure the rate at which asphalt cools as its shipped from the plant to the construction site.

“Now, you can look at the temperature segregation as they’re placing the asphalt,” Embacher explained. “Thermal profiling increases uniformity and density measurements,” which ensures that they will last longer.

Increasing the lifespan of a pavement is one of the key goals, because it reduces maintenance and replacement costs, and minimizes construction delays.

“There is no reason why concrete pavements shouldn’t last for 60 years,” Lev Khazanovich told me. “This is a new technology and it will take time to work it out for applications. You have to start somewhere. People drive and see failures, and MnDOT will study those failures and eventually it will be resolved.”