There are many ways to look at the Christopher Lollie story, the arrest in January of a man sitting in the St. Paul skyway waiting to pick up his children from day care. Probably the best way to look at the incident is to simply watch the now-viral YouTube video, which languished on Lollie’s phone as police evidence for six months, until trespassing and other charges were dismissed on July 31.

In the light of the recent incidents in Ferguson, Missouri, Lollie’s story takes on an all-too-familiar shade of racial profiling, and could be seen as flashpoint for a larger conversation about policing. (It’s a conversation that Mayor Chris Coleman seems to be willing to embrace.) You could look at the state’s identification laws and how Lollie’s allegations of profiling were handled by the St. Paul police. From an urban design perspective, however, the Lollie incident points to something else.

To me, it is no coincidence that Lollie’s violent arrest happened in the skyway. Despite decades of efforts in Minneapolis and St. Paul, the skyway system has never had clear boundaries between public and private space. (St. Paul City Attorney Sara Grewing said Wednesday, however, that Lollie was in a public area even though a security guard told police it was private.)

For better or worse, our downtown skyways are probably the most distinctive things about the Twin Cities’ downtowns. It all started back in the 1950s, when the city was rapidly changing. A number of things were happening at the same time. Streetcars were disappearing, replaced by ever-increasing  private cars that dramatically reshaped the urban landscape, clogging streets and demanding parking. In 1956, food giant (and cultural symbol) General Mills left downtown behind for good, in favor of a new suburban campus out in Golden Valley. That same year, Dayton’s opened the Southdale Shopping Center in Edina, at the time a pioneering utopian vision of a new town square. (I have written about this previously on my personal blog, both about the history and emergence of the skyways in the 1950s, and about their cloudy status as quasi-public space.)

All these events really bothered downtown leaders, who were desperate to ensure continued relevance for Minneapolis’ central business district. In response they formed the (still-extant) Downtown Council, and spurred the birth of the Minneapolis Planning Department. The first priority for both bodies was to figure out how to “save downtown.” By 1959, Minneapolis had its first modern city plan, and it was full of references to a potential skyway system. One of the chief attributes was to de-stress the city and provide a relaxing atmosphere, akin to the new suburban malls. For example, the draft plan reads:

“Persons in the central area will gain a more relaxed attitude which will presumably add to their efficiency and improve their general well-being and attitude toward life. Since there are so many of them, this could have a salutary effect on the whole city.”

To page through the plans for a future downtown (circa 1959) is to imagine downtown Minneapolis at its absolute peak, full of traffic and shopping and people, trucks cars and different modes of transit. It must have been madness at midday, and de-clogging the roads was the No. 1 priority. 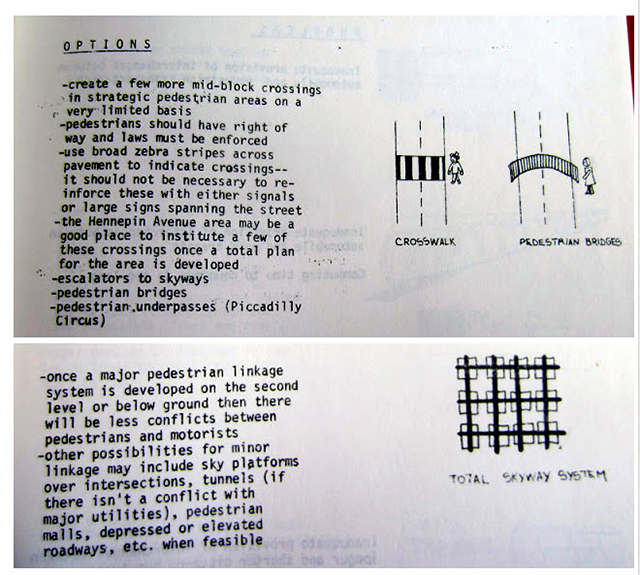 Skyways remained a twinkle in downtown eyes until a businessman named Les Park began planning a new office building at 6th and Marquette. As he built it, he constructed the city’s first skyway over Marquette Avenue in 1962. The system slowly expanded until the completion of the skyway-centric IDS Center, which knit the network into a critical mass.

Since then, Minneapolis’  skyways have grown into the largest in the world, through a series of new buildings, inelegant retrofit additions, and city-owned skyways to outlying parking ramps. The bulk of St. Paul’s skyway is a few years younger than Minneapolis, and was built with help from a federal grant; but one could argue that it makes an even larger mark on its (smaller) downtown.

To be technical, whether the skyways are public space depends on which city you’re in. In Minneapolis, most of the skyways are privately owned, a legacy of the way the system was first constructed. This means that each skyway is built and maintained independently (one reason for the interesting architecture). Thus each one has distinct operating hours, which can lead to confusion (though, at some point in the 1980s, Minneapolis began trying to regulate and standardize the hours).

In St. Paul, on the other hand, all the skyways are publicly owned and operated and are open to the public (see “General Policy Statement for the Construction of the Saint Paul Skyway System”). Jennifer Yoos, a practicing architect in Minneapolis who has studied the skyway system, explained the difference in the two cities’ policies to me.

“St. Paul is different because it’s public,” Yoos told me. “There seem to be spaces that are kind of set up for the public to use and hang out and spend time, as if it was a street space with a park bench. But in the ordinances they restrict how people can use the spaces of skyways.”

Unlike Minneapolis’ more piecemeal tapestry of private spaces, St. Pauls’ skyways are governed by policies that dictate design and expectations. Because they are officially public and were more carefully regulated, you would imagine that the St. Paul skyways would feel more like a public space.

In practice, though, as the Lollie incident reveals, the rules in skyways are always unclear. No matter their legal status, these spaces exist as a gray area where the borders between public and private space bleed together into an indistinct mass. For example, in some cases, the technical right-of-way (i.e. walkway) might be public, while chairs outside shops or office building lobbies might be private. In other cases, everything is private, even though the public has de facto access. The lack of clear lines makes negotiating the skyways a literal and figurative maze, where the rules are often invisible.

The skyway system is full of these gray areas: lobbies and foyers and semi-public tables tucked into alcoves. When combined with the imperfect wayfinding, private surveillance, often-locked bathrooms, and obscure doors to the street, the skyways are not inviting to the general public. In other words, unless you happen to work in them, skyway spaces feel exclusive.

With one thing, Lollie is not alone; it can be tough to find a place to sit down. Last year, well known downtown St. Paul artist Ken Avidor was harassed by security guards for sketching in the skyways. And, according to Nancy Fischer, who teaches urban sociology at Augburg College in Minneapolis, being told to “move along” is  a regular occurrence for anyone walking around the skyways of either city. This last year, Fischer had an urban studies class do a senior project for which they analyzed, measured and brainstormed ways to improve the St. Paul skyways.

“Although there are formal stipulations and guidelines by the city of St. Paul which designated them as public space for a certain amount of hours, in practice it’s not the same as a street,” Fischer explained to me.

Fischer’s students enlisted other students to conduct pedestrian counts. During the study, most of the students doing counts were asked to move along and not sit in the skyways. According to Fischer, the only thing unusual about Lillie’s experience within the skyways was how easily it escalated.

“I guess what does surprise me is that he wasn’t just asked to move along and that it escalated,” Fischer told me this week. “It surprises me, but it doesn’t surprise me. Because as a sociologist, I know the history and current state of race in America. A 90-year-old [using a] walker is not going to generate that response.”

The future of skyways

Even beyond the public space confusion, skyways have long remained a controversial part of the Twin Cities’ downtowns because, according to many urban design experts, they erode street life by segregating the pedestrian population. (The argument for them is even simpler; just ask anyone when it’s cold out.) But given how embedded they are within the existing architectures, where buildings are often designed and built around skyway access, both downtowns seem to be stuck with their skyways for the foreseeable future.

Compared to Minneapolis, with its larger downtown residential and office populations, St. Paul has been more reluctant to expand its skyway system. Lucy Thompson, a St. Paul city planner, says that people often wrongly describe her as being against the skyway system. On the contrary, she told me, she wants to maintain it without expanding into areas with a lot of active street life.

“City policy is to really strengthen the core skyway system that’s in place right now,” Thompson told me, “but not to encourage the expansion of the skyway system outside of that core. We need to retain the active street life in the two park districts, around Rice Park and in Lowertown.”

Improving the skyways seems difficult. Making sure that they act and feel like true public spaces would require a lot of work by building owners and the city, to attempt to provide spaces for people like Lillie (or Fischer’s students) to sit and relax, and to include art, street musicians or other things that would re-inscribe their status as public spaces.

The skyways are certainly not the only thing to blame for Lollie’s stomach-turning encounter with the police. After all, men and women (particularly African-Americans or homeless) are harassed by both public and private police on the street every day.

Yet it’s difficult to imagine Lollie’s story happening on a bench in Rice Park or a stoop in a downtown plaza. To me, the murky public/private status of the skyway system only exacerbates the existing tensions between black and white, rich and poor. Next time you find yourself walking through the skyway, and looking for a place to sit down, you might want to remember that.