A few months ago, I was performing the typical Minnesotan small-talk dance with a few friends of mine at a restaurant downtown when someone asked the ubiquitous question: “So, where’d you park?”

Being carless, I began tuning out of the conversation. But I perked up when a friend replied, “Oh, I parked 10 blocks away. I just got a Fitbit, and I’m trying to get my steps in.”

Like it or not, conversations about urban design in St. Paul and Minneapolis continually revolve around parking complaints. The difficulty of parking and how far people have to walk is probably the No. 1 thing that that most planners hear from business owners, politicians and community activists. For someone to intentionally park farther away was so opposed to what I hear in typical parking conversations that I began wondering how a little device like a Fitbit could work such a miracle.

The magic of Fitbit

In case you haven’t seen one, the Fitbit is the best known example of a “wearable” mobility technology. It’s basically a small pedometer linked to a smartphone that provides feedback about how people get around. One key Fitbit innovation is that it allows you to weigh your activity against that of friends and co-workers. (For bicycles, Strava and Zap perform pretty much the same function.)

By making walking data easy to see, Fitbits and similar technologies (like the Moves app or the new iWatch) can provide crucial feedback for people about their daily activity patterns.

“I have little kids, and a lifestyle that, if you don’t think about it, you might just get no exercise at all,” Anna Henderson told me. Henderson lives in Minneapolis’ Longfellow neighborhood and works as a planner in St. Paul.

“Because I’m either with little kids or working, it’s a struggle to prioritize time to do something physical,” Henderson explained. “So at the end of the day, after we’ve had dinner and there’s an hour before bedtime starts, I ask myself, ‘What should we do?’ And if I look at my Fitbit and just have 2 dots, well, we’re going to the park.”

Similarly, the Fitbit can change how people feel about walking, turning it from a trudge-filled chore into a more relaxing stroll.

“I’ve always loved walking, and I’ve never been the kind of person that has to get the closest parking spot,” Heidi Schallberg told me. Schallberg works for the Metropolitan Council in St. Paul, and has only missed two days of Fitbit data over the last two years. “But if you’re at 9,000 steps, you might say ‘dammit,’ and try to get to 10K. You might just go outside and take a walk, or if it’s crummy weather you might just walk in the hallways in the building there. Using the Fitbit has probably shifted me toward enjoying walking, so that it doesn’t really matter if I have to go out of my way. I’m just enjoying it more.”

Walking, biking, and driving for Ingress: the Google game

Fitbit isn’t the only mobile app that encourages people to walk and bike and explore the city. For a few years now, Google (through its partnership with a technology startup) has been running an online smartphone game called Ingress. In the game, two teams of people fight for control over the landscape by moving between different public spaces in the city. (The game’s “portals” often include churches, murals, sculptures, parks or even little free libraries.) Because playing the game requires you to physically visit each site, players must continually walk, bike or take the bus around the city. (Many Ingress players drive, too, particularly in rural areas, though using the app is speed limited to 35 miles per hour.) 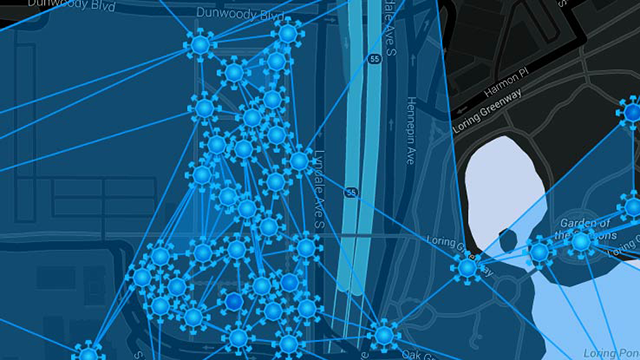 A map of Ingress portals in the Minneapolis Sculpture Garden

Mike Jackson is an Eden Prairie Ingress player who works in Richfield; playing the game has definitely motivated him to run around his neighborhood on his lunch breaks.

“I play very little from my car,” Jackson told me. “I’ll sometimes drive to the locations and then walk around those locations. And we have a group at work that attempts to go out for runs at midday, and those runs have turned from trails to going to different portals around the office.”

“Working in downtown Minneapolis, on my lunch period, I usually pick a direction,” Aaron Korver told me. Korver is a programmer from Farmington who has been playing Ingress for a year. “Either my goals will be to destroy something [by visiting the “portal”], or go visit someplace new. For example, I had never been to the Walker Sculpture [Garden], and it has tons of portals. So I rented a bike share and rode down and walked around there for 15 or 20 minutes, and biked back to work. Without it I probably wouldn’t go out, because it gives me a purpose to go walking.”

Full disclosure: I’ve been playing Ingress for three weeks on the “Enlightened” green team (of course). I have also been more motivated to go on jogs and bike my rides as I wage virtual warfare for St. Paul’s West Side.

Real-time spatial feedback technologies have been around for years, relying on the intersection of wearable monitors and massive amounts of real-time data. In many ways they’re just reaching their maturity, explained Tim Brunelle, who works as a creative director for BBDO MPLS, a local ad firm.

“Heart rate monitors or pulse sensors used to be large and cumbersome,” Brunelle told me. “Now because of advances in chip and mobile technology, you can carry really sensitive and durable technology around with you. The technology plays the role of the constant nag, and it’s made it easier for this reminding presence to be with you all the time. Maybe as humans we need that.” 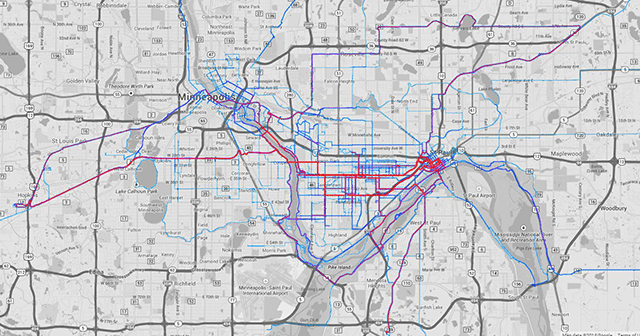 Courtesy of Mike Sonn
Mike Sonn uses the Strava smartphone app to track his bike rides around the metro.

Similarly, Jim Ivey is the co-owner of St. Paul’s Grand Avenue Software, and has been playing Ingress there for a year. He believes that spatial smartphone apps are in their infancy, and will become far more common over the next few years.

“While there are many interesting aspects to the Ingress game itself, what’s exciting (and a little scary) is the sheer amount of data that Google is collecting about where people walk, bike, drive or take transit,” Ivey said.

“I predict you’ll see hundreds of new games of this type emerge over the next few years, based on interacting with your environment. They’ll be competing to be a part of your experience every time you leave your home.”

Though technologies like Fitbit and Ingress can motivate people to walk more, they can’t change how difficult it remains to walk through the city. Melissa Jamrock works for Ramsey County in downtown St. Paul, and uses a smartphone app called Moves. For her, while smartphone apps help, they cannot overcome unwalkable streets.

“Working downtown, I’d often think that I needed to get some of these steps,” Jamrock told me. “But if downtown St. Paul were more like Nicollet Mall, I would be more inclined to walk more during my lunches. I’d be able to go sit outside and relax and talk with a friend, and think, ‘Oh this was a nice walk.’ ”

On the other end of downtown St. Paul, Anna Henderson experiences an even bleaker landscape.

“I work between the highway and the railroad,” Henderson told me. “The only things in that area are a jail and some parking lots, so it’s not really inspiring for walking. But still, I head out. If you focus on the State Capitol in the distance, then it’s OK. I’d rather walk through parking lots than not walk at all.” 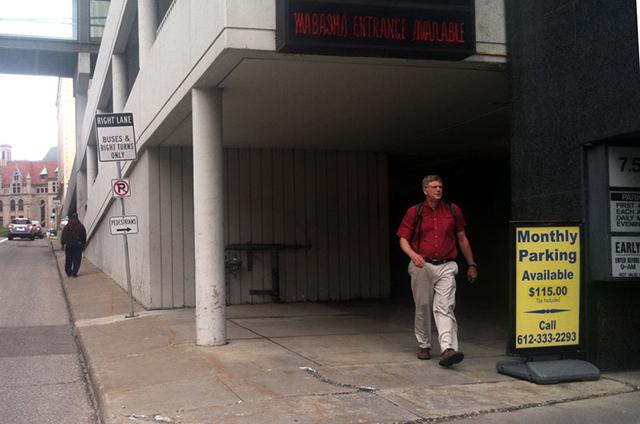 MinnPost photo by Bill Lindeke
Walkability at the Macy’s parking lot leaves something to be desired.

In other words, despite my greatest hopes, technologies like Fitbit and Ingress are not a silver bullet. They can’t change the city overnight, and no matter what smartphone apps people have, they still need pleasant, engaging and safe places to stroll through the city.

But at least for some people, smartphone apps encourage more walking. And if devoted Ingress players like Aaron Korver are any indication, new smartphone games might work wonders.

Korver wanted to make sure that I mentioned one more thing about playing Ingress: “Just make sure that in your piece, you tell anyone new to join the Green Team.” As an enlightened player myself, I have to agree.

Smartphone apps can’t change the landscape, but they do encourage walking