There is no more hallowed ground in Minneapolis than the spot where the Stone Arch Bridge meets the old mill ruins along St. Anthony Falls. It’s the spot that appears in a thousand photos and is the birthplace of the city’s milling industry.

Last week I went on a tour of the area with a group of architects from the design team SCAPE and Rogers Partners Architects+Urban Designers. They shared with me a new vision for the area that would unearth some of the history buried beneath today’s parking lots. The proposal, called Water Works Park, could cost somewhere just north of $20 million, and is full of exciting architectural ideas.

One of the most intriguing is a plaza with a scrim of water that would run up to a new extension of the Stone Arch Bridge. Likewise, the plan calls for using the forgotten footprints of the area’s old mills as “outdoor rooms” for different purposes like picnics and play. There would be a mezzanine level extending out from the marginal spaces that sit today just under the edge of downtown. And the plan’s focal point would be a pavilion that “skewers” the various levels of the park — the street, the mezzanine, the river road and the river’s edge — with a new building hosting cafés and public restrooms.

The complex layers of history at the edge of the waterfall give rise to two of my favorite parts of the park plan, the restoration of two historic rights-of-way that had been covered up and forgotten over time. The first is the old canal that used to connect the river to the mills, powering the machines that built Minneapolis’ 19th-century industry. (Anyone who doesn’t know how these canals work should immediately head to the Mill City Museum and play around with its hands-on water power model.)

Today the site of the old canal is almost invisible, covered up by surface parking and surrounded by metal fences. But the park’s plan would restore and resurrect the canal’s path, centered around the footprint of the “gatehouse” from which water flow was controlled. The path of the canal would become the scrim-covered plaza, and anyone looking at the site might imagine how 19th-century engineering worked its wonders.

The second big connection would restore an old railroad right-of-way connecting 2nd Avenue to the river through an already-existing underpass. Spending time on the river today, it’s easy to forget this whole area was a massive rail yard. Other than a few iron orphans outside the Milwaukee Depot and Mill City elevators, there is little sign of the old railroad torn up decades ago. Perhaps the last remnant of the rail yard is a public easement running through the surface parking lots by the corner of 2nd Street and 3rd Avenue, making a much-needed connection between downtown and the river. (Currently, the best way to get there is down a narrow and often-congested ramp.)

In the plan, the new street is being termed a woonerf (a Dutch word meaning “shared street”) where pedestrians and bicycles would have priority, but cars would still be allowed at low speeds. The proposal would dramatically improve bicycling connectivity along the river, while showcasing a new planning idea that might be useful in similar spots throughout the city.

The catch, of course, is that the park plan is not funded yet. The proposal comes out of the offices of the Minneapolis Parks Foundation, a nonprofit that operates as a philanthropic arm for the city’s century-old parks system. They’re hoping to raise money with wealthy donors, foundations, or corporations to make the new vision into a riverfront reality.

Thomas Evers is the executive director of the decade-old Parks Foundation; he says the foundation is crucial for expanding the city’s park system.

“In Minneapolis, we’ve had the fortune of not having to have a park foundation like this,” Evers told me. “In other cities they’ve had to have foundations, because mayors have cut budgets.”

But things change, and today the city’s parks budgets are stretched. 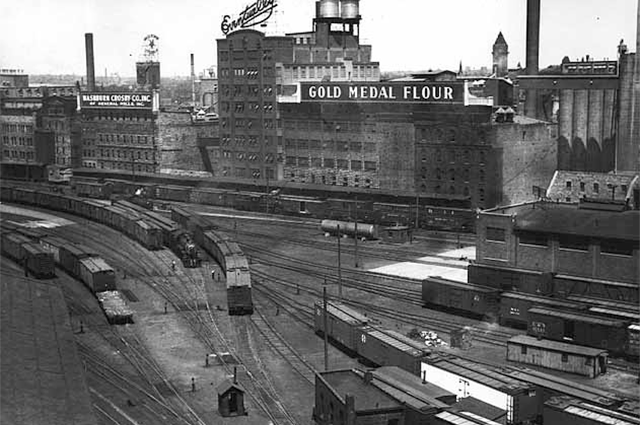 Courtesy of the Minnesota Historical Society
The Washburn-Crosby mills and railroad yard in Minneapolis, circa 1940.

Liz Wielinski is president of the Minneapolis Park & Recreation Board, and agrees that foundation support is becoming more important for the city’s extensive system. (Unlike the arrangement in most U.S. cities, Minneapolis’ parks are governed by a separately elected Parks Board.)

“It does change a little bit,” Wielinski told me. “In the past, we always relied on many different sources of public funding. But that’s become tighter and tighter, and we’ve had to go into the area of philanthropic giving just like everyone else.”

The dangers of public/private partnerships

The public/private model of parks funding can certainly have its downside, and Minneapolis’ riverfront area has a wide range of examples of these kinds of projects. In Cityscape earlier this year I wrote about how The Yard — the proposed park next to the new football stadium — had become a test case for park privatization.

And just on the other side of the Guthrie sits Gold Medal Park, which was designed and built entirely through donations from William McGuire, the former CEO of UnitedHealth Group. That park occupies uneasy ground as city land leased as a private-public-space hybrid. Compared to the parks on either side of the Stone Arch Bridge, these examples lack the guarantees that come with being an official Minneapolis City Park.

And while park philanthropies have been operating for years in other cities, there are sometimes mixed results about how well they serve all their citizens. For example, New York City’s Bryant Park has been frequently critiqued for turning over a public space for profit-generating private events like the New York City’s Fashion Week.

“On the philanthropic side of corporate giving there are strings about purpose and mission and whether it aligns with public purposes,” Park Board Commissioner Scott Vreeland told me. “And there are only so many dollars, so if all the money goes to a project like The Yard, it might suck the air out of the library park or other downtown investments.”

But according to Wielinski, the Minneapolis Parks Foundation will be less susceptible to these kinds of geographic inequities because it’s explicitly set up to serve parks throughout the city.

“In most of the places where they have the biggest problems, philanthropists say that money has to be used in specific ways,” Wielinski told me. “In Minneapolis, the Park Foundation is set up to serve any of the parks in the system. Since we’re the land owners, deciding with them how money will be spent is more of a collaborative effort.”

Perhaps in this era of shrinking government budgets, having a separate fundraising foundation for Minneapolis’ historic park system might make sense. For example, Minneapolis’ privately run Sea Salt Eatery at Minnehaha Park is the city’s biggest public-private success story, generating around $300,000 dollars of annual revenue for the system.

“Sea Salt is very successful,” Vreeland told me this week. “But in those conversations, initially there was a lot of resistance. Folks were very concerned this would be privatization of a public park, so we as commissioners were very sensitive and respectful about the park as a commons, as a place that people can gather and recreate and be inspired by nature.”

Walking around the mill ruins site today, it’s easy to see why the Parks Foundation is so excited about its plan. Even though this is the riverfront’s focal point, large areas along the river downtown remain marginalized and forgotten, places where wild shrubs grow in empty fields out of sight, where people still climb on fragile ruins. If teaming up with philanthropists is what it takes to start unearthing Minneapolis’ long-buried history, the delicate balance of private money and public parks will be a sign of things to come.

Correction: An earlier version of this article had the wrong first name for Scott Vreeland.