Apart from traffic cones and guardrails, bus stops are probably the most boring piece of urban infrastructure in our cities today. They stand ignored on street corners surrounded by grit, concrete and speeding cars. During the wintertime, people huddle inside, clutching their coats against the wind. And every once in a while, an unromantic bus squeaks to the curb and drops off a passenger.

It’s safe to say that most people take bus stops for granted, but when you begin to study them, a world opens up. Believe it or not, some bus stops can be beautiful, and can even make it seem as though time is flying by. Meanwhile, a poorly designed stop can erode a city’s transit system from within, and make our city’s bus riders feel like second-class citizens.

According to Julie Quinn and Gayle Gartner, Metro Transit planners and engineers, the Twin Cities’ transit system has about 12,000 bus stops spread throughout the metro area, and somewhere around 800 of them have shelters operated by the agency. Of the stops with shelters, about 14 percent of them of have lights and 10 percent have heat for the winter. In theory, the agency has guidelines about which well-used stops should receive shelters, but in practice there are many stops in the center cities that lack shelters despite high ridership.

And even among the shelters, there is a lot of variability. In the urban core, many shelters are owned by advertising giant CBS Outdoor, which builds and installs shelters in exchange for ad revenue. (CBS shelters are boxy and square, and the ads are always placed on the backsides to maintain transparency for security purposes.) 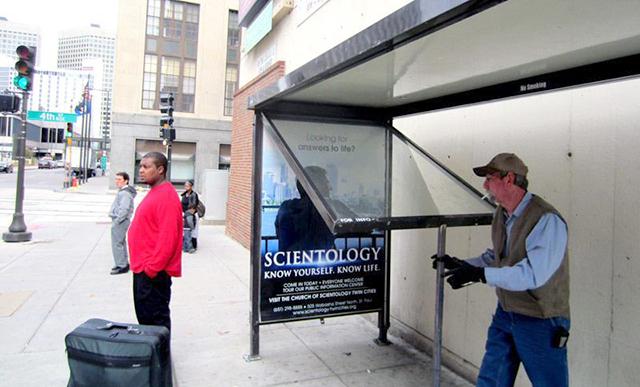 Meanwhile, most official Metro Transit shelters boast a new curved roof design to keep off snow. Maintaining its shelters is no easy task, and the agency has two different facilities maintenance teams that travel the network checking shelters and fixing them up when necessary. To me, cleaning up the graffiti or trash, replacing broken glass, and shoveling snow during the wintertime seems a necessary but Sisyphean task.

On top of that, “custom shelters” are scattered throughout the Twin Cities, constructed and maintained as special public/private collaborations: For example, the fancy shelters on Nicollet Mall, the “flower shelter” on the No. 19 line, or the elaborate shelter on 6th and Jackson in downtown St. Paul, which agency insiders call the “Taj Mahal.” These shelters are few and far between, but can sometimes be quite beautiful. Most of them, however, are designed to fit with the agency’s standard glass panes, for ease of maintenance. Next time you’re out wandering the street, take a look at the shelter and you’ll be able to spot the differences. 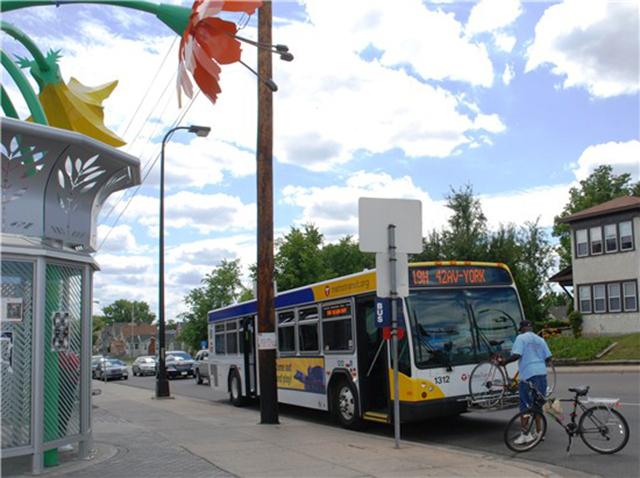 Courtesy of Metro Transit
The “flower shelter” on the No. 19 line.

Designing a transit system is always a matter of difficult tradeoffs, and placing bus stops involves balancing service frequency and geographic coverage. One big variable is whether a bus stop sits on the “near side” or the “far side” of an intersection. Near side stops allow people to disembark more quickly, whereas far side stops are generally safer for pedestrians crossing the street. The catch is that far-side stops rely on complex traffic signal timing to work well, which is a fact that Green Line riders have likely noticed. (The Green Line’s far side stops often mean the train stops twice at many intersections.)

The other bus stop placement variable lies in the distance between bus stops. According to Alex Cecchini, a local researcher and engineer, European bus systems spread their stops out in exchange for faster service times but U.S. bus stops are often grouped much closer together. Cecchini argues eliminating half of Metro Transit’s stops on key corridors, and encouraging people to walk a bit more, would speed up service and save the agency money. 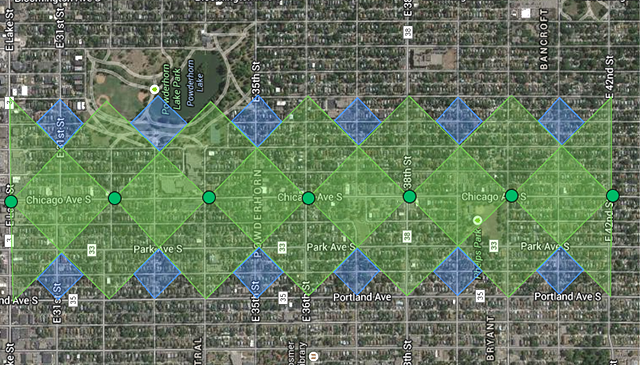 Courtesy of Alex Cecchini
Alex Cecchini argues eliminating half of Metro Transit’s stops on key corridors, and encouraging people to walk a bit more, would speed up service and save the agency money.

“If you remove stops and go to ¼ mile spacing, systems that have done this in the U.S. have seen travel time reductions of 5 or 10 percent,” Cecchini told me. “It doesn’t sound like much, but if you think about what that could do to transit’s operating budget, it increases frequency, and you don’t have to spend any more money. I thought it was amazing that removing every other bus stop could do that.”

Though some people would have to walk farther for the bus, Cecchini would like to see Metro Transit remove stops along certain lines, like the No. 4 bus along Lyndale Avenue, to see if it would improve speed and ridership.

The psychological impact of shelter design

Once you figure out where to put your bus stops, shelter design can also have a big impact people’s transit experience bus. Whether to spend money on service improvements (i.e. buses) or infrastructure (i.e. stops and shelters) is yet another tradeoff for transit agencies with limited funds. But according to a recent University of Minnesota study, spending money on shelters affects how long people think they’re waiting for a bus.

Yingling Fan is a transportation-engineering professor at the University of Minnesota, and authored a study that surveyed riders about user experiences at various Twin Cities’ bus stops.

“Having a shelter makes a big difference in people’s perceived waiting time,” Fan explained to me. “This indicates that it’s important to provide bus shelters at stops. We also found that posted schedule was important, and that people perceiving they are safe at stops was important, especially for female riders.”

While it might seem counterintuitive, paying attention to design details like “next bus” signage, benches and other shelter designs can make the buses seem faster, even if the actual bus times don’t change. This kind of psychological effect suggests that transit systems might want to pay more attention to bus stops, and not simply focus on increasing service.

The future of bus stops

Believe it or not, a lot is changing these days in the world of bus stops. Thanks in part to a federal grant, next year Metro Transit will be aggressively expanding the number of shelters in the core cities, where most of the bus ridership is centered.

“A lot of work on bus shelters is in process,” Gartner told me. “We have a lot of work to do before we can add shelters and locations. All the work we’re going to do in the next year and a half is just the very beginning of what’s going to be a real emphasis on shelters.”

For example, the agency is trying to design narrower bus shelters that can be placed at stops with space constraints — for example in downtown Minneapolis, where there are tensions between pedestrians, bus riders, and the needs of building owners. 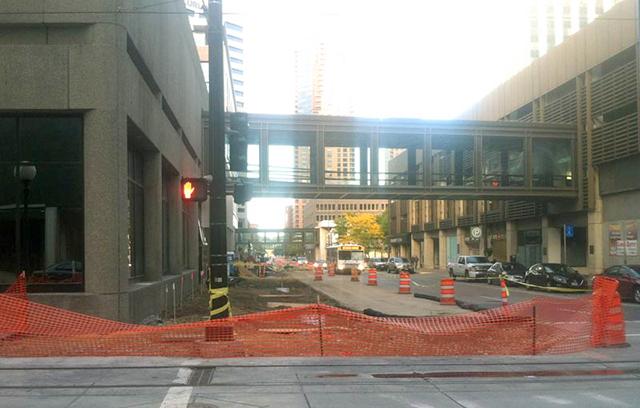 But the agency’s progress is not fast enough for some. The lack of signage at most bus stops, recently became a call to action for a “guerrilla urbanist” group called Twin Cities Urbanizing Politely (TCUP). According to the group’s spokesperson (who prefers to remain anonymous), “bus stop information in the Twin Cities is especially lacking. In most cases, no shelter means no transit information whatsoever.”

In response to the bare signage, the folks at TCUP have launched a campaign to improve the Spartan situation. In response, they’re making their own Metro Transit signs and posting them along a few routes in the Twin Cities. (The effort is based on a similar grassroots signage campaign in Brazil.) 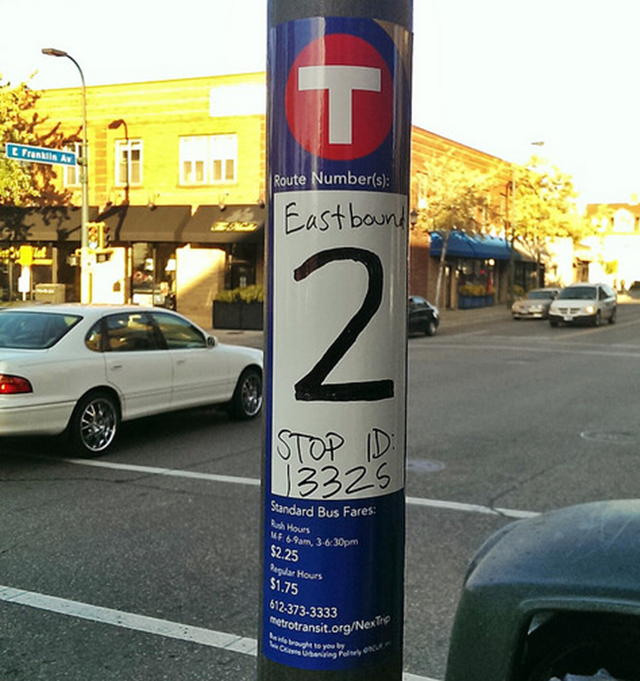 “We decided to take some issues into our own hands and enhanced bus stop signage is a great place to start,” the TCUP spokesperson told me. “We hope that small projects like this will signal to Metro Transit (and other government agencies) that we care about how we are being served, and we’re not afraid to act.”

For years, Metro Transit’s lack of resources has meant that our city’s transit system has had to neglect the finer points of bus stop design. But some new ideas and new research, as well as a timely grant, mean a lot will be changing over the next few years. Maybe it’s time to start paying attention to the bus stop near you.

Everything you always wanted to know about bus stops (and more)