Earlier this week in a packed room in West St. Paul, the Twin Cities’ five suburban counties held a dramatic meeting to announce concerns about the region’s transportation planning. At the center of the discussion was a list of “common and unique concerns” shared by the suburban counties (Anoka, Dakota, Scott, Washington, and Carver). To most people, these concerns will seem obscure: They include calls for federal oversight of “performance reviews and measures,” fewer “land use density minimums,” “strategic capacity enhancements” for highways, and a focus on the “principal arterial needs of the region.” But decoded from engineering language, the suburban counties are asking for more road funding and a greater degree of geographic equity in transportation investments.

The meeting was a peek into the opaque world of conflict between outer- and inner-ring suburbs, core cities and exurbs. Usually this inter-county struggle remains behind closed doors, but this week's rare public display comes at a time when a lot has been shifting in the world of transportation policy. For example, equity is a key political buzzword these days, particularly since the Twin Cites has become infamous for having the widest racial gaps in the nation. But when it comes to transportation, there remains a big difference between geographic, economic and racial equity.

In order to understand the suburban counties' complaints, one must dive into the weeds of the Twin Cities’ unique regional governance system. In our area, the Metropolitan Council has shaped land use planning, sewer investments and our transit and transportation system since 1967. (Most U.S. metros are fractured and don’t have an independent metrowide governmental agency.)

However, the Met Council is appointed rather than elected, and so federal rules require an additional body — the Transportation Advisory Board (TAB) — to weigh in. The TAB has 33 members that include elected officials from all seven counties and some cities, as well as citizen and state agency members. The TAB makes decisions on Federal funding and sends recommendations to the Met Council, which retains the final say over regional planning. (See, I told you it was complicated!)

This week’s meeting revolved around two recent activities that are going on with these agencies. The first was a new funding formula recently adopted by the TAB, while the second is the ongoing planning efforts at the Met Council to set the transportation planning priorities for the region — the so-called 2040 Transportation Policy Plan. While these things are ostensibly separate, as the suburban counties see it, each case proposes big planning changes that will make it more difficult for outlying areas to receive road and transit money.

Starting to affect pockets of poverty

Russ Stark is a City Council member who represents St. Paul on the TAB, and has spent years lobbying for greater attention to economic inequality in transportation spending.

“This new funding formula is one of the ways that the Met Council and the TAB believe we can start to help concentrated areas of poverty,” Stark told me. “We’re making sure we’re connecting them to infrastructure and serving them with transit.”

Thanks to Stark and others on the TAB, the committee recently adopted a new equity-inclusive funding formula on a close vote. For the first time, transportation projects will be specifically graded on whether they serve areas of poverty, and will include a more careful accounting of the region’s affordable housing. Stark is hopeful that the new formula will make a difference “around the margins” toward reducing poverty at both the regional and neighborhood level.

“If you look at the last 20 years, on the transit side we’ve been funding a lot of projects in the suburbs,” Stark explained to me last week. “It’s been tilted towards suburban park and ride projects and suburban express bus routes. And generally speaking, where roadways have been expanded, most of those projects have been in the outlying suburbs as well. To me this change is one way of rebalancing what we’ve been doing for the last 20 years.” 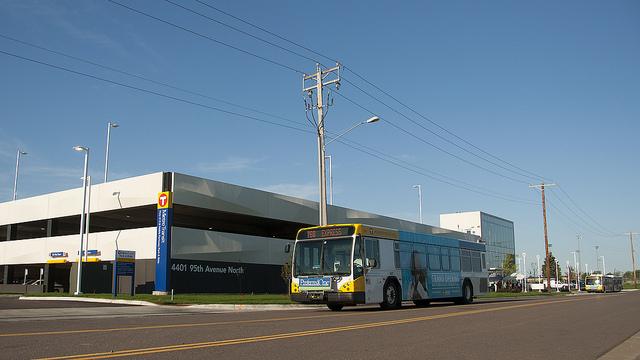 One reason that the TAB decision might seem problematic for the five suburban counties is that the transportation landscape has been changing a lot in recent years. Growth in driving has tapered off, while a combination of a weak housing market, the increased popularity of transit, and a reduction in federal funding has made it increasingly difficult to expand development on the edges of the metro area. Thanks to these trends, since 2010, more economic and job growth has been centered in the region’s core counties.

Adam Duininck is a member of the Met Council, and serves as its representative on the TAB. He argues that these recent changes to the TAB formula merely serve to correct long-standing imbalances in regional transportation funding.

“Some [funding formulas] favor certain parts of the region and others do not,” Duininck told me.

“That’s why they are frustrated with equity scoring — when one [funding criteria] isn’t in favor of what you’re advocating for. They probably feel like there’s been a big increase in transit money because of how large grants are, for example the Green Line. But when you look at the big picture, our road system is not decades behind similar systems in other metro areas. We have a lot of lane miles per capita. But our transit system is five to 20 years behind other metro regions.” 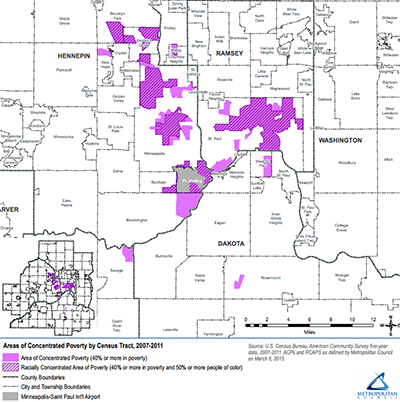 Including poverty within transportation decisions poses problems for suburban counties in particular because poverty is not evenly distributed throughout the metro area, particularly what are called “racially concentrated areas of poverty.” Most of the Twin Cities’ poverty is concentrated in the core cities of Minneapolis and St. Paul, as well as a few (mostly) inner-ring suburbs. This means that paying attention to the region’s economic equity cannot treat all counties and cities as equals.

Lars Negstad works on transportation policy for ISAIAH, an inter-faith organization dedicated to decreasing racial and economic inequity in the Twin Cities region. He believes that equity-based changes to transportation investment are long overdue.

“It’s problematic that this technical advisory committee carries a lot of weight over some big decisions,” Negstad told me. “The decision at the TAB illustrates exactly the problem in regional governance where an advisory group of engineers can weigh in and say ‘No, we shouldn’t make these racial equity points.’”

Negstad points to the long history of redlining, racial profiling and freeway construction that exacerbated social inequality in the region for decades.

“On the whole, we’re subsidizing white flight and urban sprawl,” Negstad said. “We’re building the city to get commuters from suburban homes to downtown jobs, and then continuing to build on that pace at the expense of the crumbling infrastructure in the core cities and inner-ring suburbs. We need to plan for much greater investment in bus service so that people have good access to bus service, not overcrowded buses.”

Transportation and the equity gap

In last year's mayoral campaign, new Minneapolis mayor Betsy Hodges made reducing racial and economic inequality into her No. 1 priority. But because the Twin Cities has so many separate cities and counties, Minneapolis can hardly solve the regional equity gap on its own. Perhaps the kinds of changes now taking place at the regional policy level can start to help.

“One of the lessons I took away from [Monday’s] meeting is that the five counties together represent about one-third of the metro population, but they punch above their weight,” Negstad told me. “But it’s important for central cities and inner-ring suburbs to come together, and for people who believe that everybody deserves a chance to get where they need to go to speak up, organize, and have a louder voice in the debate.”