This week I’ve been thinking about the best urban views in Minneapolis and St. Paul. City views come in all shapes and sizes. There are vistas, high places where the city spills out before you, such as the views from St. Paul’s Mounds Park or Minneapolis from Farview Park. Then there are views of monuments, things seen rising up out of the city like church steeples or water towers: the water towers in Prospect Park, Highland Park or the Washburn neighborhoods are justifiably famous for this.

Lately, though, I’ve been noticing what you might call “axial views,” buildings that terminate at focal points from particular streets. A great example is from along Selby Avenue looking east, where the dome of the great St. Paul Cathedral rises to form a focal point at the end of the street. It’s the view that gives the neighborhood both its name and flavor. 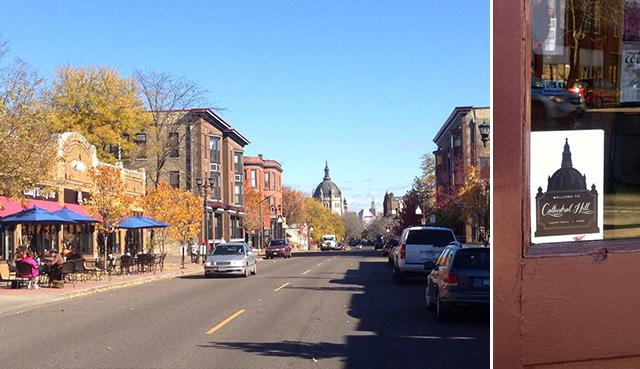 Photos by Matty Lang and Bill Lindeke
The cathedral view that gives the neighborhood both its name and flavor.

Charlene Roise is a historical consultant who has spent years thinking about the meaning of urban views.

“City views have so many different levels,” Roise told me. “There’s the aesthetic one, the air-and-light one, and the identity one. In St. Paul, because of the angled street grid there are a lot more shorter European-style views, whereas in Minneapolis, the downtown grid creates these long prairie-style views.”

The imagined views of the 1917 plan for Minneapolis

Axial views occupy a special place in urban history. During the 19th century, city planners took great pains to transform European cities with long avenues terminating in public squares. Paris’ boulevards are the most urban axes, built where the powerful city planner Baron von Haussmann bulldozed boulevards through the dense confines of working class Paris. These views tied the city together along wide streets that connect landmarks like the Arc de Triomphe.

In his encyclopedic book, “The City Shaped,” the architectural historian Spiro Kostoff describes this mode of city planning as “the grand manner,” or the City Beautiful movement. The goal was to transform the city into a visual image of power and rationality.

America’s best example of this planning style planning is in Washington, D.C., where Pierre L’Enfant designed the city around axial roads terminating at national monuments. According to Kostoff, L’Enfant’s plan had “a grand spacious urban ensemble pinned on focal points, [with] dramatic effects and public spaces as setting for monuments.” 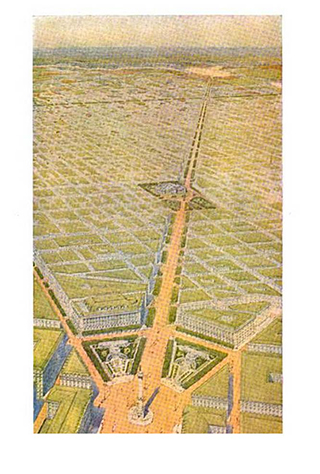 In the early 20th century, plans for grand urban views appeared throughout the Midwest. Daniel Burnham’s famous Plan for Chicago was released in 1909, and the local example is the 1917 Minneapolis Plan. This week, I went down to the Hennepin History Museum to check out its copy. The plan is full of colorful illustrations of grand boulevards with monumental vistas (gorgeous illustrations by Jules Guerin), depicting axial boulevards that tie together civic monuments like the Minneapolis Art Institute.

For various economic and pragmatic reasons, the views shown in the 1917 Minneapolis Plan never became reality. As Patrick Coleman, the rare book curator at the Minnesota Historical Society, explained to me, one of the key reasons the plan was shelved was the rise of the automobile.

“This plan was developed on the eve of the automobile,” Coleman explained. “It didn’t account for the explosion of people using the automobile, so all of those grand plans for roads and avenues just couldn’t be implemented. The automobile changed everything.”

Existing and lost views in St. Paul and Minneapolis

Instead, to find a proper Twin Cities axial view today, you’re best off heading to St. Paul. While some of St. Paul’s axial views are mostly accidental (e.g. the Cathedral from Selby Avenue), elsewhere in the city you can find streets that were deliberately laid out around monumental focal points.

The longest such view is from Smith Avenue on the city’s West Side (where I live), where the street was planned deliberately to terminate with the State Capitol dome rising across the river. Likewise, the green malls and streets around the State Capitol form a contiguous City Beautiful-style landscape. John Ireland Boulevard and Cedar Avenue form a kind of “trivium,” visual axes that connect the city’s monuments. While building them required destroying a the “central park” neighborhood, the “grand manner” of the Capitol grounds would have made L’Enfant or Burnham proud. 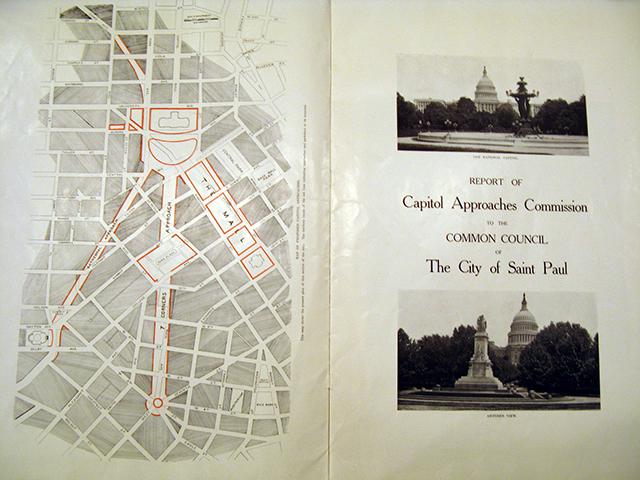 In city planning today, views easily become a hotly contested struggle as new buildings are proposed throughout the city. One of the key problems with views is that they are ineffable. A view is literally a relative concept, the empty space between things. Nobody owns them, and fights over a new building going up in downtown or in a neighborhood can become heated just for this reason.

In some other cities, historical views are strictly regulated. For example, London preserves “view sheds” of specific buildings from specific places, and as a result, the new skyscrapers that have been popping up in that rapidly changing city are all placed just past the edges of its defined view sheds.

Robert Roscoe, an urban historian and former member of Minneapolis Preservation Commission, believes that a city’s views are a crucial part of our sense of civic belonging.

“Who owns the view? We all do,” Roscoe told me. “Along with our neighbors, we view groups of houses, shops, places of worship and certain architectural and landscape oddments that can define our neighborhood, and collectively serve to reinforce our civic belonging.”

Making sure that new development reinforces our often-conflicting views of views can be a delicate dance for preservationists, particularly since people are often attached to their personal views.

Meanwhile, groups like the State Department of Natural Resources and Natural Park Service also plays a role in preserving views, particularly along the Mississippi River Valley Critical Area. John Anfinson is the chief of resource management for the National Park Service.

Getting over the skyline

While neither Minneapolis nor St. Paul have very many European style axial views, instead we have a particularly American conception: the view of the skyline from along our wide freeway. If you do a Google Image search for Minneapolis, the most common skyline view will probably be from the 24th Street pedestrian bridge over Interstate 35W.

Joe Scott is an amateur photographer who blogs at Minneapolis Topography, and believes that Minneapolis’ signature view-from-the-freeway doesn’t do justice to the essence of the city. 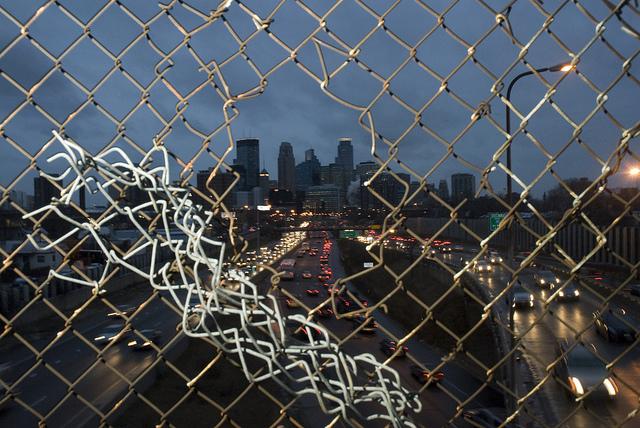 Photo by Joe Scott
Minneapolis, as seen from above I-35W.

“I think people think about skylines too much,” he told me this week. “The skyline is just an incidental thing. It doesn’t really tell you much about the city. Most of the buildings look pretty similar, and if you’re observing skyline you’re automatically not there, you’re somewhere else looking at it. It’s a shallow representation.”

Instead, Scott believes we should come to terms with the often ugly and utilitarian landscape that exists all around us, things like freeway soundwalls and parking ramps.

Here’s a thought experiment: Imagine what our city views might have been like if, instead of building utilitarian freeways filled with cars, we’d built the kind of Parisian-style boulevards with long monumental vistas depicted in the 1917 Plan. Maybe it would change how we view ourselves as a city.