This year, the Minneapolis Downtown Council is trying something new to lure people to Nicollet Mall for the holidays. It’s called the Holidazzle Village featuring the Minneapolis Holiday Market, a long name that reflects its complicated origins. The new market will be a great test of whether Minnesotans can embrace Minneapolis’ new vision for a downtown centered on year-round street life.

The history of Holidazzle

If you think about it, the history of downtown Minneapolis holiday attractions reflects the changing downtown culture. As a kid, I remember riding up the escalators to the 8th floor of Dayton’s Department Store to see the annual Christmas show, a spectacle full of white “Santa bears,” fancy children’s stories, and cookies that I can still half-taste. In those days, many parents felt compelled to bring their kids downtown, and it revealed how central downtown department stores remained for people throughout the Twin Cities.

The Holidazzle Parade grew directly out of that 8th floor tradition. Last year, I chatted with Michael Murnane, who was one of the art directors who founded the parade back in the early 1990s. Murnane explained to me how the parade grew organically as an attempt to bring the Dayton’s 8th floor experience out into the street. Murnane and a small group of others made the first dazzling floats by hand, and the parade grew into an annual tradition that packed downtown streets and brought downtown together.

Last year I brought a group of friends downtown to attend one of the final Holidazzle parades. If you’ve never seen one, the parade was charming in an old-fashioned way: a procession of floats covered in lights, surrounded by costumed workers from various downtown employers, with often-repeating themes based on children’s stories. (Basically, if you seen one, you’ve seen them all.)

Yet the parade drew thousands of people into the (sometimes desolate) downtown Minneapolis evenings, families bringing their children down to the Nicollet sidewalks and filling the downtown skyways overhead. But despite the crowds, downtown retail continued to struggle in the increasingly competitive retail marketplace, and downtown has begun to change more quickly.

This year, the parade is gone. In its place, on Nicollet Mall between 10th and 12th Streets, you’ll find the new Holiday Market. Picture a series of wooden tents filled with crafts and snacks of all kinds, including mulled wine, sausages, potato pancakes, apple specialties, roasted nuts and locally made soups. Surrounding them, on Peavey Plaza, you might find live reindeer, children’s stories coming to life, bands playing music, people dressed as light bulbs (the old Holidazzle costumes), a skating rink, or fireworks. They’re creating a holiday market in the European tradition. And unlike the downtown holiday attractions of the decades past, this time everything will be happening outside.

Leah Wong is the vice-president of events and marketing for the Downtown Council, which largely speaks for downtown businesses and property owners. She is excited about how the marketplace will engage with the public. 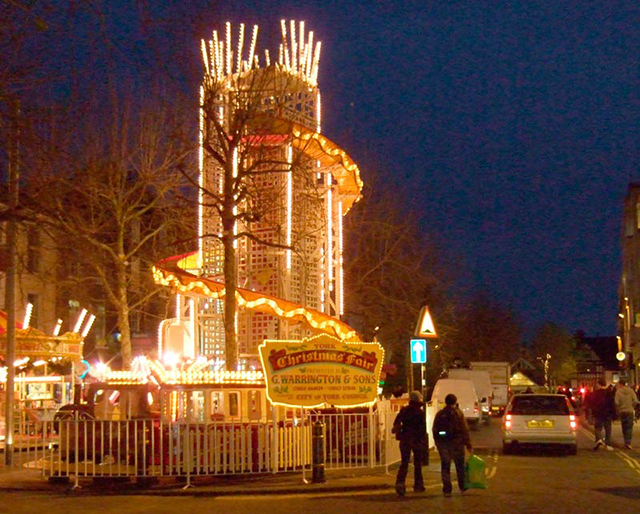 Photo by Bill Lindeke
A winter market place in the town square of York, England.

The new marketplace is based on a popular European tradition where cities and towns set up clusters of tents and attractions in town squares during the holiday season. Here in the U.S., as Wong explained to me, there are only eight similar festival markets, including a popular example in Chicago’s downtown Millennium Park.

The changing nature of the market, which will have different features every weekend, is one reason Leah Wong believes that the attractions will outweigh people’s reluctance to be outside in the winter weather.

“Minnesotans are hardy and are active and like to be outdoors,” Wong told me this week. “Even in the winter, we know that people will come out and play with us if we have the right opportunity for them. People will enjoy the winter Old World feel of meandering around the wooden huts.”

The shift away from a passive parade and toward an interactive outdoor market is no coincidence. Rather, the kinds of things that Wong describes — interactivity, street life, and a “consistently compelling sidewalk experience” — come directly from the Downtown Council’s new 2025 plan. The plan, adopted a few years ago, reflects a turnaround — away from downtown’s climate-controlled skyways and toward a focus on street activity.

The plan’s 10 goals include doubling downtown’s residential population and creating a vibrant sidewalk experience along Nicollet Avenue. For example, the plan offers the following goal for downtown’s streets:

Deliver a consistently excellent pedestrian experience that inspires people to explore Downtown block after block, no matter the season or time of day — 24/7/365. Embrace density to build the kind of critical mass required to sustain a successful urban core.

To me, the plan marks a recognition of shifting priorities away from enclosed office, retail and parking-lot spaces and toward the interconnected downtown sidewalks, mixed-use activity, new apartments and transit. The Holiday Market seems like the next step in the larger downtown trend that includes food trucks, pop-up parks, and artists displaying their work in temporary window galleries.

This time of year, embracing the streets might seem like cold comfort for many downtown workers and visitors. With the opening of the market on Friday, the new downtown philosophy will receive a real test: Will Minnesotans willingly go outside in the wintertime?

I’m optimistic. Now that the Vikings are playing home games outside for the first time in decades (albeit temporarily), maybe it’s time to start rethinking what famous Danish urban planner Jan Gehl once called downtown’s “defensive posture” to the weather.

I hope Minnesotans are up to the challenge, because we deserve a downtown full of people at all times of the day and year. You’re going to have to head out of the skyways to find the Holidazzle Village’s Holiday Market, and maybe it’ll mark the rebirth of year-round street life in downtown Minneapolis. My advice is to get out your warm coat, head downtown, and get some glühwein (spiced hot wine). Winter isn’t so bad when you’re surrounded by people in the downtown square. 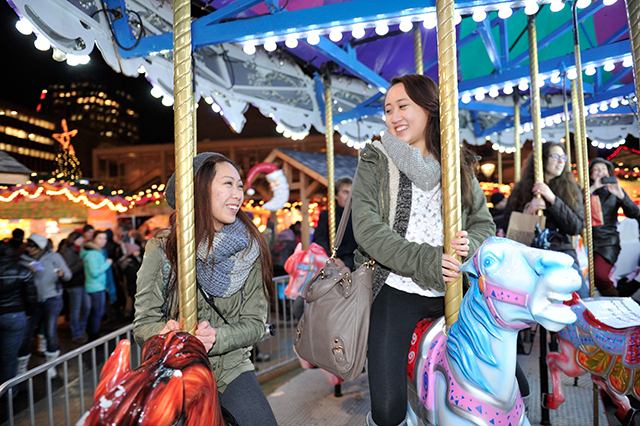 The Holidazzle Village, between 10th Street and 12th Street along Nicollet Mall, will be open Friday, Nov. 28, and weekends (Saturday-Sunday) through December. It will be open from 3 p.m. to 8 p.m.