Like it or not, shoveling the sidewalk is a rite of passage for urban Minnesotans, a seemingly little thing that can make the difference between a winter full of wonderland walks or months of suffocating claustrophobia. Every neighborhood has its sidewalk scofflaws, its snowblower saviors, and anonymous snowshovel Samaritans. And after each unique snowflake falls, sidewalk clearance runs the gamut from the half-hearted shovel width to the “edge-to-edgers,” who don’t rest until every concrete centimeter is clear.

Diving into the legal specifics of sidewalk shoveling, what first seems simple turns out to be maddeningly complicated. Like most winter cities, Minneapolis has an ordinance requiring property owners to shovel sidewalks. For single-family homes and duplexes, the deadline is 24 hours after a snowfall, but it is only four hours for larger apartments or commercial property. If someone doesn’t shovel their sidewalks and is reported (via the city’s 311 system), the city has four sidewalk inspectors who come out within a few days and check for shoveling. If the sidewalk isn’t clear, they’ll send a warning letter, followed by a second inspection. All that takes five to seven days, but eventually the city has a few people who will come out, shovel the sidewalk, and add a shoveling fee to the property tax bill.

Needless to say, this kind of enforcement situation can be tricky, and as MPR recently pointed out, fines and assessments are unevenly distributed throughout the city, often focusing around “chronic areas” with a lot of rental or foreclosure properties.

Another potential problem is that relying on the 311 system as an enforcement mechanism means that neighborhoods with a lot of active engagement will get more city attention than places that lack a shoveling culture.

Lots of reasons for calling — or not

“There do seem to be areas that call and complain more,” Mike Kennedy told me this week. Kennedy is a senior engineer for Public Works’ Street Maintenance division, tasked with keeping the city’s sidewalks in good order. “Who knows the reasons for that. Some people simply care more. Or maybe people figure that nothing’s going to happen if they call. There are lots of reasons you see different areas report sidewalks more than others. But everybody has a phone; all you have to do is pick it up.”

This week, I tested out the 311 reporting method for both Minneapolis and St. Paul with Joe Totten, an engineering student who lives in the Southeast-Como neighborhood, a chronic area for sidewalk scofflaws. Totten clocked in at under a minute using the 311 smartphone app, and he says one of the keys to getting the city to actually respond to the complaint is to always include a photo of the sidewalk in question. That said, relying on citizen activism inevitably results in geographic inequalities about enforcement. Paying attention to ensuring quality winter walks for the whole city remains a difficult job.

Results on the ground

The technical legality of sidewalk ordinances doesn’t matter much to people trying to walk around in the wintertime, who are still faced with icy gantlets at corners and in front of scofflaw homes. They just want results.

Scott Engel is a member of Minneapolis’ Pedestrian Advisory Committee who has been focusing on improving sidewalks for years. After pushed by Engel and others, Minneapolis has begun using special snow-shoveling contractors instead of over-worked public works crews after a scofflaw is reported. Thanks to this change, the city has reduced turnaround time on shoveling from weeks to days, which has helped results on the ground.

Another key problem comes from snowplows at intersections. After a winter of heavy snowfall, each time the plow comes it piles up thick and often icy snow at corners and in the street, blocking pedestrians on the sidewalks. Meanwhile, property owners are technically only responsible for shoveling paths out to the gutters and curb line, so these snowplow Himalayas can become real problems for anyone trying to walk around. 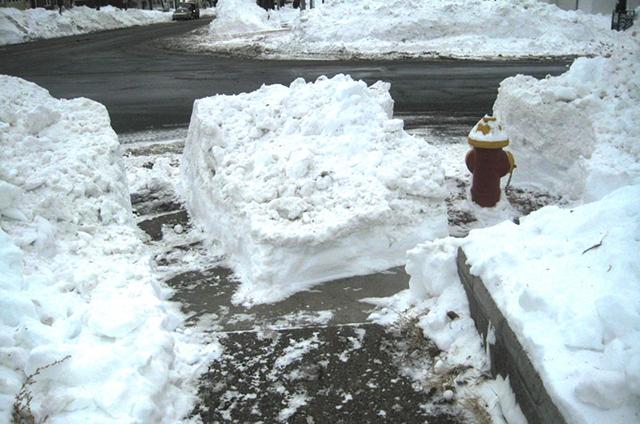 MinnPost photo by Bill Lindeke
After a winter of heavy snowfall, each time the plow comes it piles up thick and often icy snow at corners and in the street, blocking pedestrians on the sidewalks.

“We’ve got 16,000 corners in the city and those piles add up on us,” Kennedy explained. “For many years, Public Works has taken on the responsibility of going out and clearing those corners, but it’s always been on a resource-availability basis. If it keeps snowing we can’t get out there, and it takes a long time to get to 16,000 corners.”

This year, after prodding from Engel and other pedestrian activists, Minneapolis budgeted an extra $200,000 specifically for clearing out street-corner plowed snow along Pedestrian Priority Corridors, which include most of the main commercial streets in the city. 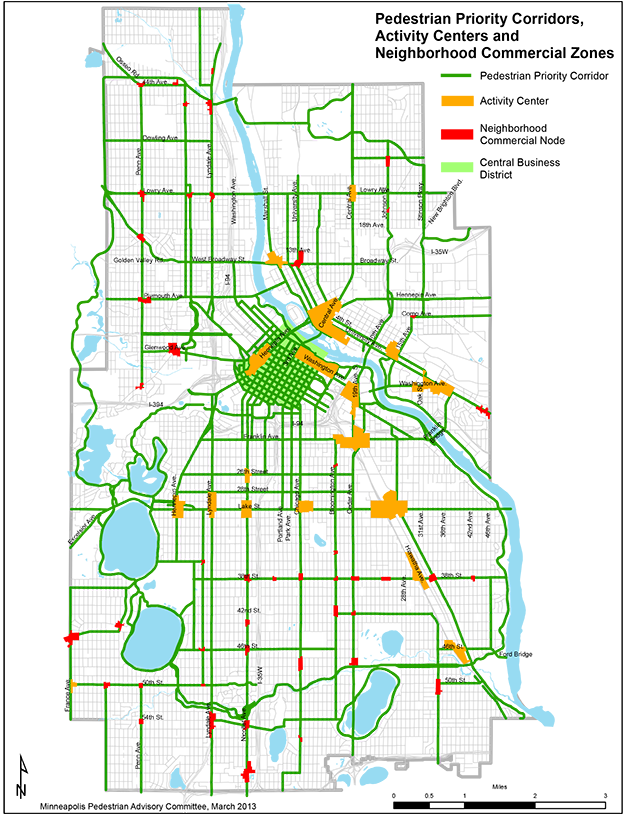 City of Minneapolis
Minneapolis budgeted an extra $200,000 specifically for clearing out street-corner plowed snow along Pedestrian Priority Corridors, highlighted above in green.

Working with and around the elderly and disabled

One of the stickiest problems for sidewalk shoveling is how to handle people who are physically unable to shovel their sidewalks. The best solution is to have a charitable neighbor help out, but that’s next to impossible to organize and many sidewalks remain unshoveled.

“There is a significant portion of Minneapolis that do not own a car,” Engel told me this week. “There are a multitude of reasons: They might be too old, too young, disabled, too poor, or simply choose not to. Some of these people that are housebound for months at a time because the city chooses not to enforce what is actually a pretty strong ordinance. It’s a mental health thing. You’re literally housebound, and that’s not healthy for a citizenry.”

For the elderly and disabled, the irony can be tragic because these are the very people who are most at risk from a slippery fall, and depend on sidewalks for their freedom. It’s literally a slippery slope.

“In the past I used to leap small piles with no issues and no falls, but I second guess that now,” Julia Washenberger told me this week. Washenberger uses a manual wheelchair for mobility, but has become increasingly nervous about getting around since she fell back in 2008 (in the summertime).

“Ice doesn’t bother me, but getting stuck in a snowbank is awful,” she said. “Curb cuts at street level get missed when plowed. Many people with disabilities find a way somehow to get things shoveled, but they become trapped when they can’t get through the curb cuts that seem to be no one’s responsibility. I can’t imagine how others who are similarly situated as I am who have to rely on public transportation deal with it, but oftentimes they manage.“

If you own a house in the city, you’ve probably faced the great sidewalk shoveling dilemma: It’s early in the morning and very cold out, completely dark, but it snowed last night and an inch or two is sitting on your sidewalk. The looming question: Do you get up a few minutes early, bundle up and shovel the sidewalk? Or do you slink away to work in shame, telling yourself some half-truth about getting to it later?

The more you walk around our wintertime cityscape, the more sidewalk shoveling seems to be an almost magical emergent effect. The other day I was strolling through St. Paul to a friend’s house to watch the Packer game, and was amazed at the high quality of sidewalk shoveling. Nearly every block in every direction was cleared edge-to-edge, all the way down to the concrete. Meanwhile, other neighborhoods remain a slapdash slipshod mess. To me, sidewalk shoveling doesn’t necessarily tie to income or housing type, but is a subtle social outcome of neighbor connectivity.

If you want my advice, next time you face the shoveling dilemma, seize the moment and face your sidewalk apathy demons. Help out an elderly neighbor, go edge-to-edge, and do your part to cure the Twin Cities’ chronic case of winter walk phobia.

The ins and outs of the all-important Minnesota must-do: snow shoveling