There’s nothing less glamorous than strip malls. They’re so ubiquitous, you stop noticing them. Seas of faded asphalt edged by low concrete buildings. Thin facades spread out like a casino buffet, the signs above marking the chiropractor, liquor store, pharmacy or (more often than you think) amazing ethnic restaurants. These kinds of buildings are the hallmark of the postwar American landscape, so they’re easy to take for granted. Increasingly, however, cities like St. Paul and Bloomington are trying to change the classic strip-mall formula as they prepare for transit investments. But changing a strip mall is harder than you think.

I need to disclose right up front that I’m writing this particular piece from the perspective not only of an urban geographer exploring/explaining the challenges and dynamics of the issue but also as someone who voted with the majority in the recent Sibley Plaza decision by the St. Paul Planning Commission, an advisory body that I serve on.

As transit investment becomes more popular around the Twin Cities, planners are focusing more on “transit oriented development” (or TOD). In order to help transit investments “pay off” for cities, the land around potential transit stops has to be reconfigured so that it prioritizes people walking on foot. But this poses huge problems in already-built areas like the intersection of Penn Avenue and American Boulevard in Bloomington, where planners like Glen Markegard have been working for years on trying to re-zone property around future transit investments.

“The proposed zoning is meant to implement the vision of the Penn-American plan,” Markegard told me last week. “The plan calls for a variety of things: attractive redevelopment and streetscapes, walkable streets and smaller blocks. Right now, we have a lot of superblocks in that area.”

For planners like Markegard, making an area walkable involves a few key rules that come straight from human psychology. The goal is to create safe, comfortable and interesting places, which involves changing architecture and space. For example, people are far more willing to walk past shop windows than blank walls. And people feel more comfortable walking by trees and buildings that come right up to the sidewalk, rather than on exposed pathways. If you’ve ever traversed a mall parking lot, you know that walking can seem like an eternity.

St. Paul’s West 7th Street neighborhood faces similar problems along the Riverview Corridor (as it’s known), a hot spot for transit-oriented planning. In the coming years, a streetcar, light rail or bus rapid transit line might run directly down 7th Street, connecting downtown St. Paul to the airport, Ford site and/or Blue Line. (A lot is still yet to be determined.)

That’s one big reason the planners in St. Paul have suggested rezoning all the land to better encourage walking and transit, including Sibley Plaza, a big strip mall by St. Paul Avenue.

“In the case of Sibley Plaza, you try to work with the property owners,” city Planning Director Donna Drummond explained to me. “You hope they’ll be interested in creating a development that’s walkable, attractive, and transit-user friendly.”

In this case, that involved changing the zoning from older “B2 zone” to a newer “Traditional Neighborhood” (TN) category. The difference is that drive-throughs and front-facing parking lots aren’t allowed under the new zoning. But for Sibley Plaza, these changes posed problems for its redevelopment plans.

“When the city began looking at all its transit corridors and doing TN zoning, we balked at it,” Ken Henk told me this week. Henk’s company, Paster Properties, has owned the strip mall for 60 years, is not pleased with the city’s proposed new requirements, which would disallow drive-throughs and parking lots in the proposed redevelopment. For example, moving the parking behind or next to the building would force businesses to have multiple doorways.

“It’s difficult for stores to maintain two entrances, one off the street and one facing the parking lot,” Henk said. “Smaller stores have an issue with that a lot of time. Or a grocery with a lot of registers would prefer to have those at one location.”

Meanwhile, in Bloomington, the Penn-American plan is attempting to increase walkability in what Markegard calls a “high level of service transit node.” The problem is that the current property is almost entirely designed around driving cars, and it’s next to impossible to reconcile the two types of architecture. For example, how to zone the Southtown Mall has proven to be a point of contention between the city and the mall’s owners. 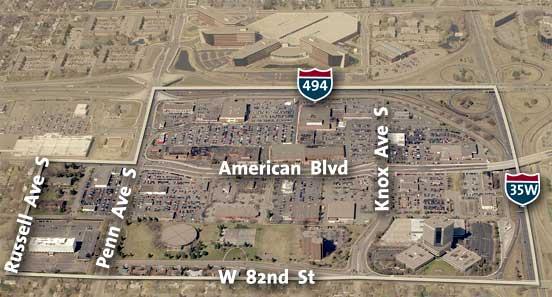 Courtesy of the City of Bloomington
The area affected by the Penn-American plan.

“The biggest challenge is that the city’s visions do not always match the landowner’s visions for the property,” Markegard told me. “There are varying concepts of the ‘highest and best use.’ From the city perspective, the best use is the one that provides a lot of activity, synergy with the other uses, and might attract new uses to the area.” 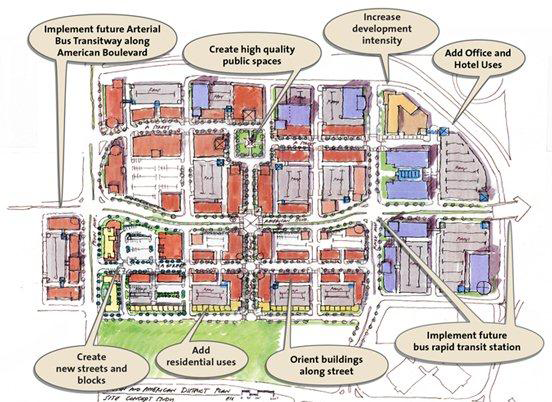 Courtesy of the City of Bloomington
The proposal for Penn-American

While they might be exciting for many people, future plans for transit-oriented development don’t hold much sway for many existing business owners, where the bottom line is still measured in easy access for drivers. For example, to preserve his redevelopment plans for Sibley Plaza, Henk’s company has lobbied the city to drop its rezoning plans. Losing the drive-throughs, and having to move the parking around the building, made redevelopment far more challenging.

On Wednesday, the City Council held a public hearing on whether to rezone the mall, and will vote on the issue next week. Last month, the advisory Planning Commission voted against rezoning the plaza. If the City Council decides to keep the exisitng zoning, Pater Properties will build a new mixed-use development with parking in front of the buildings, including drive-throughs for a pharmacy and coffee shop. That outcome doesn’t sit well with some members of the Planning Commission.

“I would like to see a nice tree-lined boulevard with wide sidewalks and multiple storefronts,” Christopher Ochs told me. Ochs is one of the planning commissioners who voted to rezone the strip mall. “I’d like the development to do more, have windows on the street, commerce that would attract attention and do more than advertise for the drive-bys and traffic. If the building was closer, it would help shape that corridor, and traffic might be controlled more easily.”

The balance of planning

These days, rethinking the classic strip mall is becoming a hot topic in planning departments throughout the metro area. Particularly as transit lines continue to be planned and built, this kind of issue promises to come up again and again. Attempting to make these automobile-dominated spaces more walkable involves confronting the tension between future and existing land uses. How do you weigh potential development like a walkable mixed-use building against existing strip mall businesses like auto garages or a drive-through fast-food place?

For now, changing the expectations and patterns of the Twin Cities’ strip malls seems like a very slow process.

“As we get more transit investments in the city, the equation will continue to change,” Drummond told me. “Developers and business owners will recognize the benefits that come from attracting people on bikes, walking and taking transit. Businesses will be more wiling to give up things like drive-through, not making the vehicle the primary thing that you’re always trying to design around.”

For now, though, cars will continue to pour in and out of places like Bloomington’s Southtown Mall or St. Paul’s Sibley Plaza. Until the transit arrives, it’s going to be difficult to change much along the sidewalks or the street.

The visionary challenges of rethinking the strip mall