Anyone who’s ever handed out grades knows how difficult it is. I did this for years, teaching geography around the Twin Cities, and readily admit that grades can sometimes be a bit arbitrary.

But if assigning value to students is a challenge, imagine giving grades to city streets. More and more transportation engineers are struggling to evaluate our roads as they rethink one of the key performance measures called “level of service” (LOS).

The engineering origins of LOS

A while back, I did my best to explain the complexities of street and highway design manuals and the role they play in creating our built environment. Today I want to dive into the detail of performance measurement that I learned about recently at a webinar (my least favorite neologism) hosted by the advocacy organization Transit for Livable Communities.

As Peter Koonce, an engineer in Portland, Oregon, explained during the session, the idea of assigning letter grades to streets emerged during the 1950s as traffic engineering was developing its disciplinary foundations. Broadly speaking, civil engineering is split up into a few different fields, like structural engineering or geo-engineering. In most of these fields, the art and science of the profession is devoted to designs that will ward off failures like the infamous collapse of the Tacoma Narrows bridge.

But when it comes to designing a city street, what exactly constitutes a “failure”?

Answering that difficult question is how the “level of service” (LOS) concept was born. Initially designed for freeways, LOS began playing a huge role in the ubiquitous Highway Capacity Manual that shapes how we build our urban streets. Transportation departments began measuring the amount of delay at specific intersections, and grading on an A-F letter scale. For example, an ‘A’ grade was defined as “traffic flows at or above the posted speed limit and all motorists have complete mobility between lanes.” Likewise, any intersection where drivers have to wait more than 80 seconds during rush hour is marked “LOS-F,” a failure. 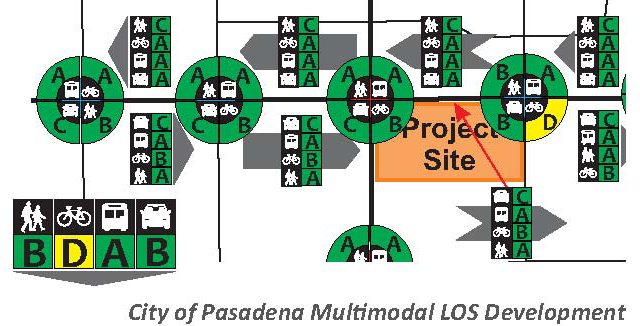 “The number one problem with the highway capacity manual is how it’s been applied,” Peter Koonce explained during the talk. “The manual is really designed in a way to provide people with less delay, [and adopts] the perspective that we could move away from congestion. But it results in sprawl, in all its various aspects.”

Once you have the grading scale in place, many of the principles of traffic engineering unfold. To design a system with as few failures as possible, through the years engineers have made valiant efforts to create a congestion-free city, widening roads and increasing traffic speeds. But in recent years, as the high economic and livability costs of the LOS-driven system have become more apparent, some transportation and public works departments are starting to question the grade-based foundation of the system.

If you zoom in a real-world example, you can start to see how this works. The intersection of Lexington and Randolph in St. Paul has seen a lot of change over the years. About a decade ago, it was “traffic calmed” from a dangerous 4-lane design into a 3-lane street. And then a popular grocery store was built at the intersection, which has increased the number of cars on the corner. Today plans are in the works to completely reconstruct the street; the only question is how.

Dave Pasuik has spent years serving on the Macalester-Groveland Transportation Committee, the local neighborhood group. He’s upset about Ramsey County’s proposals to widen the street in the name of safety.

“There are tons of ways to make an intersection safe without making it bigger,” Pasuik told me this week. “Making any intersection safe for pedestrians, first you have to slow down the traffic, maybe restrict some turning at that intersections, and use the available space to build pedestrian islands so that people can stop and be safe crossing the street.” 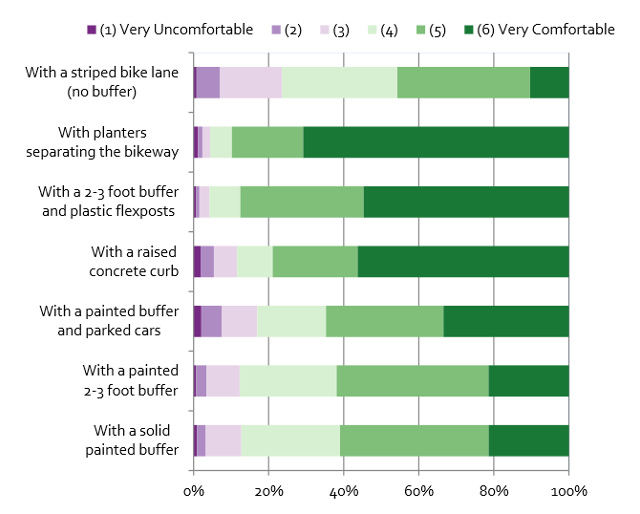 The intersection is just one example, but it turns out that how you measure success or failure is hugely important for thinking about design decisions. There are devilish details: Do you give the street a grade based only on the rush-hour peak, or average it out over longer periods of time? Do you count the delay for each vehicle equally, or count the delay per person? (That would dramatically change the way that bus delays fit into the picture.)

The problem is that improving the LOS grade comes with a lot of tradeoffs. In many cases almost impossible to improve grades for drivers without decreasing safety and quality of life in the neighborhood.

“Stand on the corner and watch the cars, you realize that walking is not safe,” Pasuik told me. “To propose widening the street, for me that says you’re using something strange to make your reasoning.”

What would a holistic Level of Service look like?

The details of the “level of service” concept rest on perception. The 80-second grading standard evolved out of surveys where drivers were asked how much delay is acceptable. But applying the same principles to other modes involves shifting perspectives, and getting out from behind the windshield. And beginning in the 2010 version of the Highway Capacity Manual, federal traffic engineers did exactly that, using video cameras and surveys to give grades to the various qualities of sidewalks and bike lanes.

“[The grades] are trying to give engineers an objective way to measure those tradeoffs,” Nick Foster, a planner from Boise, Idaho, explained during the recent seminar. “It is perception-based. They took videos at bicyclists or pedestrian eye level, and showed them to people around the country, and asked how satisfied they would be if they were in that situation.”

And so for the first time, engineers have developed grading standards that go beyond the driver’s seat. A lot of details remain to be worked out, though, especially when giving grades for rapidly evolving bike lanes. For example, a recent study out of Portland revealed that bicyclists give surprisingly high marks to protected bike lanes (especially the ones with those little white plastic bollards beside them). 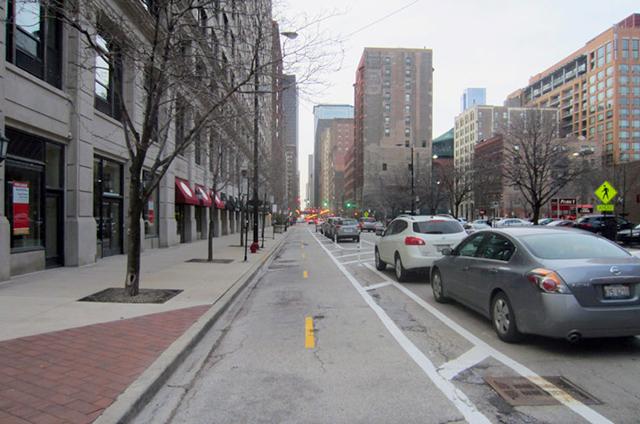 MinnPost photo by Bill Lindeke
A cycle track with plastic bollards in the South Loop of Chicago.

And in some places, most notably New York City, they’ve moved toward scrapping the LOS grading scale altogether, focus on mobility rather than congestion as a holistic way of designing streets. But for most engineers, the LOS grades are still important because they’re easily understood by lots of people, from traffic engineers to engaged citizens like Pasuik.

“Today, we fail to consider the completeness of the system,” Peter Koonce explained. “If all we’re doing is using automobile delay as our sole measure from which to base our transportation investments, it’s not going to get us to improve the bike or pedestrian environment.”

For cities, changing the grading system remains a crucial task. The corner of Lexington and Randolph will be a good test of how well St. Paul and Ramsey County are doing at evaluating our city streets. And in a few years, you’ll be able to stand on the brand new street corner for yourself. Feel free to be honest, and grade it however you like.