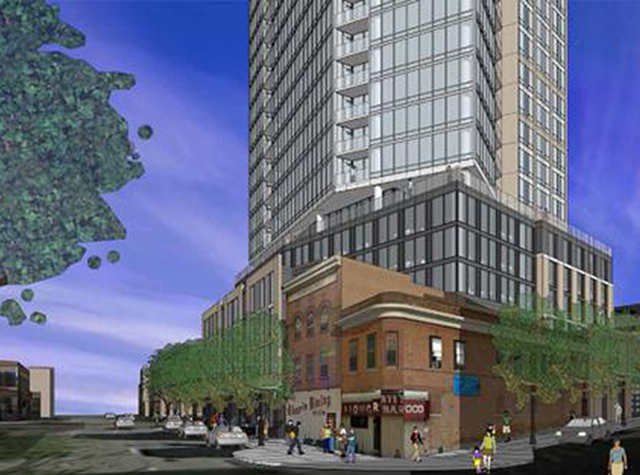 Courtesy of ESG Architects
A rendering of the proposed 30 story tower for the Nye’s site.

When travel writer Doug Mack wants to show out-of-town visitors around Minneapolis, there are three places that he takes them: Matt’s Bar for a Jucy Lucy, a walk around historic Nicollet Island, and over to Nye’s Polonaise Room. Of all city’s old locales, Nye’s Polonaise Room, with its schmaltzy decor, its piano bar and polka lounge, and its long list of characters, is probably second only to Matt’s in terms of displaying the ebullient spirit of the City of Lakes.

On weekends, a wide cross-section of the metro area crams into glittering yellow booths as long-time waitresses wielding pierogies and Zywiec push their way between dancing elbows. So when Nye’s owners announced they would be closing this year, it crushed many a nostalgic heart (my own included).

But today, a heated debate is taking place around the future of the Nye’s site, which sits just across the Hennepin Avenue Bridge from downtown. A new building on the plot is being designed by a developer, Schafer Richardson, but the proposed 30-story tower has infuriated the historic preservation community and placed a spotlight on the delicate balance between historic preservation and increasing density in Minneapolis. At stake is what exactly the future of the city will look like.

The future of Nye’s

Since the December announcement of the closing of the supper club (named the “best bar in America” by Esquire magazine less then 10 years ago), most people I’ve talked with have resigned themselves to the loss of the irreplaceably quirky joint. (There is a Facebook group dedicated to saving the establishment.) The real estate is too valuable, and the owners too committed to selling, to harbor much hope for a deus ex machina move from an angel investor.

In the meantime, development proposals for the site have been popping up like pogo sticks. The first announcement back in December declared that the buildings would be demolished and replaced with a vague “concrete and steel” mixed-use building, despite the site falling within the borders of the Saint Anthony Falls Historic District. Then, this month, a new proposal surfaced that would keep the existing historic buildings, but include a 30-story apartment tower in the background. As you can probably imagine, the proposal didn’t sit well with Minneapolis’ historic preservation community.

Doug Mack is the vice-president of Preserve Minneapolis, a volunteer organization dedicated to preserving the city’s historic resources that hosts meetings, breakfasts and tours focusing on Minneapolis history and architecture. Last week Preserve Minneapolis released a statement declaring the Nye’s proposal showing “a cavalier disregard for long-standing rules, neighborhood character, and local heritage in the city’s oldest and arguable most historically significant neighborhood.” The sticking point is that the historic district calls for limits on building heights to four-stories, height limits dwarfed by the proposed building,

“This developer came in and started simply ignoring the guidelines,” Mack explained when I called him this week. (For a typically thoughtful preservationist like Mack, “cavalier disregard” is a strong statement.) “I sincerely doubt that SR didn’t know what these guidelines were. The Nye’s plan goes against historic precedent, either through ignorance or willful dismissal of guidelines. There’s a sense of complete disregard of established precedent and for looking at context.”

The ephemeral nature of historic character

One of the oldest urban clichés states that cities are “always changing,” and nowhere do social and economic tides grip Minneapolis more than the area surrounding the Hennepin Avenue Bridge. Today, Nicollet Island, just next to the Nye’s site (and one of Mack’s must-see spots), seems like a quaint historic neighborhood filled with hundred-year-old homes nestled along curving tree-lined streets.

But in reality, the island’s historic fabric is a carefully crafted illusion. With its central location between the two mill districts, Nicollet Island used to be one of the most densely populated spots in the city, filled with dense and rundown apartments and factories of all kinds. Many of the old homes found there today were moved there from elsewhere in the city, planted onto land bulldozed by traffic engineers hoping to construct another freeway through downtown.

Likewise, both sides of today’s pastoral riverfront used to be clear-cut parcels dominated by massive railroad yards and piles of industrial detritus. And before that, they were the home of the Dakota people. Unless you strap on historical blinders, looking at today’s Saint Anthony area reveals a palimpsest of urban visions and historic erasure, an archive of long-forgotten dreams of planners and businessmen. How should shiny new buildings fit into such a rich and tangled past?

Courtesy of the Minnesota Historical Society
Nicollet Island in 1906, covered in factories and apartment buildings.

One of the great tragedies of the development-versus-preservation debate is that it so often leads to extreme positions. The vast majority of people involved in the city’s planning process want to strike a balance and avoid all-or-nothing fights that quickly devolve into personal shouting matches.

Council Member Jacob Frey represents the city’s Third Ward, bridging downtown and the Northeast riverfront, where the majority of Minneapolis’ new development investment is taking place. If you ask him, he’ll tell you he’s trying hard to strike a balance between keeping the past and building a future.

“I believe growth and preservation are not mutually exclusive,” Frey said this week. (For legal reasons, Frey cannot comment on the specific Nye’s proposal until it comes before the City Council.) “There are ways to incorporate density, retain historical character and dramatically improve public realm and streetscape simultaneously,” he said. “Look at cities in Europe; they don’t knock down castles, historic architecture or churches. They build around it, and it’s resulted in a really wonderful experience on the street. You move through time periods and centuries all in one block.”

The case for density

When she was elected last year, Mayor Betsy Hodges set an ambitious goal for growing Minneapolis’ long-stagnant population, calling for an increase to 500,000 residents over the next ten years. That goal is one of the reasons that not everyone thinks the Nye’s proposal is a bad idea. For example, Scott Shaffer (no relation to the developer) is an urban planning student at the Univeristy of Minnesota’s Humphrey School, and frequent activist around urban development issues in Minneapolis. Shaffer believes the proposal is an example of how to make walkable lifestyles more affordable and accessible to more people.

“I like the existing business and buildings; they’re an important part of Minneapolis history,” Shaffer told me. “So I’m happy the proposed project saves the two turn-of-the-century buildings, and extends the mixed-use feel of the street. The new building would be down the block a bit, where there’s a parking lot right now. It would contribute to walkable character of Northeast Minneapolis, and add to the neighborhood a lot of people who would be able to ride the bus, walk downtown on a nice day, and go do all the nice things that make Northeast pretty great.”

For his part, Doug Mack believes that there is plenty of growth and new construction in the city already. He points to plans at the Superior Plating site, only two blocks away, as a great place for density. With Frey’s support, an 18-story building is planned for the site of an old (and polluted) metals plant. Despite NIMBY stereotypes, most preservationists take pains to accommodate growth while maintaining a sense of history by focusing on things like consistent massing (overall building shape and size) and materials (visual presentation of surfaces).

When Nye’s Polonaise room shuts down, there’s little question that Minneapolis will have lost one of its most historic establishments. But every good thing must come to an end. Given the changing tastes and the hot downtown real-estate market, these kinds of changes start to seem inevitable. But the question of what sprouts up in its place moves beyond simple nostalgia.

“When you make a decision, the most important thing to do is to consider the alternatives,” Frey told me. In every single case battle of preservation-versus-growth always ask the question, ‘if not this, then what?’”

Given the cloudy future of the Nye’s Polonaise site, answering Frey’s question does not seem easy. No matter what happens, whatever night Nye’s closes its doors for the last time, you’ll find me down in Northeast gazing at the river and remembering the old days.