There’s a Twin Cites perception that Minneapolis’ street grid makes perfect sense, while St. Paul’s streets are a confusing mishmash, designed, as Jesse Ventura so famously blustered, “by drunken Irishmen.” With all its methodologically numbered and alphabetized streets extending out from the downtown with certitude, Minneapolis seems to offer a near-perfect legibility, house and numbers carefully correlated and the city sectioned off like rectangular compass. But within the obsessive-compulsive grid lies a zone that can be devilishly misleading, where the aura of legibility belies a trap. I call it the Numerological Twilight Zone (NTZ).

According to my rough calculations, the NTZ is loosely defined as the area where the numbers of streets and avenues come close to each other, probably within 10 or 15 ordinal numerals. For example, the corner of 10th Avenue and 53rd Street (Nokomis Heights Lutheran Church) is pretty easy to figure out, but finding 31st Avenue and 43rd Street (Northrop Elementary) can be confusing, especially if you’re bad at math. If you plot the area out, beginning roughly at Elliot Park, where the north-south street grid begins, you get a large swath of south Minneapolis with confusingly tricky numbers, places where it might take you a few tries to find what you’re looking for. 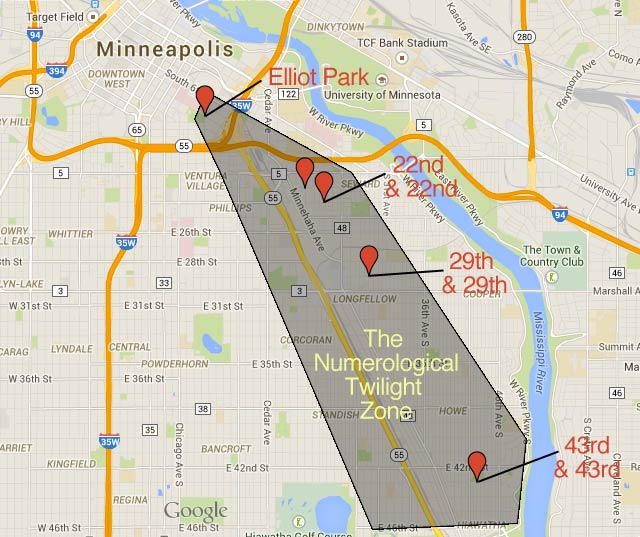 The aura of confusion makes living in the NTZ an occasional challenge. When Daniel and Natalie Brauer bought their house in 2012, just off the corner of 35th Street and 33rd Avenue, they were vaguely aware that they were moving to a confusing location. But last year they had a surprising wake-up call, where due to a miscommunication with a delivery company, they spent a day trying to track down a package of important medicine.

“It was medicine that had to be delivered within a certain time frame,” Brauer told me. “When we called Fed-Ex to track it down, they insisted that they had delivered the package. We thought, well that doesn’t make sense. Then it struck us that maybe they had delivered the medicine to the other 35th and 33rd. So we walked the few blocks over to where our address would have been at the other intersection. And there it was, sitting on the back porch of the house.”

Brauer’s story is what David Swan, who also owns a home in the NTZ (46th and 30th), calls the “bizarro address” phenomenon. It’s almost like geographical physics: For every address in the zone, there is an equal and opposite address attracting potential visitors.

In his famous 1961 book, “The Image of the City,” urban designer Kevin Lynch described the “apparent clarity or ‘legibility’ of the cityscape.” According to Lynch, when people walk or drive through cities, they navigate by “reading” the streets using what he calls landmarks, paths and nodes. In other words, good cities combine some order and organization with visual cues that allow you to explore, without getting completely lost.

The NTZ likely lost a lot of its legibility when the solid tracks of the streetcar system disappeared. But even then, the area was confusing, with lines zig-zagging southeast from downtown along 34th, 36th, 42nd or 46th Avenues (depending on where you were). And even today, the buses that follow the old lines through the NTZ are difficult to figure out.

“My favorite has always been explaining which bus stop to stand next to at the intersection of 46th Ave S and E 46th St,” Jared Fette, who works at the Metro Transit telephone hotline, explained to me. “To catch the 23H, make sure you’re on 46th Ave, the side street with less traffic. It will pick you up on 46th Ave going south, and then turn left on 46th Street and head into St. Paul.”

Landmarks in a sea of numbers

Within the NTZ, the mass of endless numbers erases easy legibility, and paths within the city can disappear for outsiders who can’t decode them. Finding landmarks like the Birchwood Cafe (25th and 33rd) or the Chatterbox Pub (35th and 22nd) can offer lessons in humility. Many folks end up asking themselves: Which 37th and 38th has the Fire Roast Café again?

For the brave and adventurous, the trick to navigating the NTZ is to rely on landmarks like the Riverview Theater (38th and 42nd). Joshua Post Lee, an urban studies student at the University of Minnesota, fixes on the cluster of businesses at 28th Avenue South. It’s a tactic that Lynch would surely have recommended.

“It took me some time to get used to it,” Lee told me. “Just remember one major one, like 28th Ave, where Baker’s Wife is, and count from there. The numbers are in order just like everywhere else in the city. Use them to figure your way around.”

Crooked streets like Minnehaha Avenue exacerbate the NTZ effect. As Brie Monahan, who lives within the NTZ, described to me this week, giving directions can quickly turn into a geographic tongue twister:

Some people I talk to insist that navigating the NTZ is easy, that all you have to do is maintain the Street-then-Avenue naming convention, and anyone can figure it out. As in many cities, once you develop the memory map that provides you with Lynchian “imageability,” knowing your way around becomes intuitive. But I cling to my belief that the NTZ remains a navigational challenge, even in an era of ubiquitous smartphone directions.

Theoretically, there are ways that Minneapolis might make navigating this part of the city a bit easier. The city might give non-numeric names to a few of the key commercial streets (like Lake Street and Franklin Avenue, which are where 30th and 20th Streets ought to be). This would have the added benefit of providing ways for political and neighborhood leaders to honor famous notables. If 28th Avenue South were re-named John Berryman Avenue, wouldn’t it be easier to find Chris and Rob’s hot dogs (42nd and 31st)?

But next time you hear a smug Minneapolitan brag about their orderly streets, remind them about the Numerological Twilight Zone. For insiders, they can rest easy knowing that they are safe from unwanted outsiders. For the rest of us, a vague cloud of certainty hangs over this part of the city. And if your package doesn’t get delivered on the first try, you can always go check out your “bizzaro address.” There’s a good chance that the box will be waiting for you on the porch.