Driving along the freeway singing along to Whitney Houston or engrossed in the latest book on tape, you can easily forget the impacts on the city around you. Ensconced in 21st-century car comforts, it’s impossible to realize how streaming traffic affects the thousands of people in nearby homes. But one of the most overlooked problems is freeway noise.

One reason we might not notice noise is that the sound of cars can be uncannily pleasing. (One friend of mine calls the sound soothing, “almost like a river.”) For others, freeway noise is an unceasing torment, particularly the high whine of motorcycles or the low rumble of decelerating trucks. Over the past few decades, to prevent freeway noise, sound walls have become a ubiquitous part of our urban landscape. But the art and science of noise wall design is more complicated than you might think.

A brief history of noise walls

When highway planners first started drawing lines on maps, building wide freeways through the hearts of cites, they were seen as a largely unmitigated good. Freeways were a modern idea that would increase the economic circulation of the urban system and solve traffic congestion once and for all. The noise of cars was an afterthought.

It wasn’t until the 1972 National Environmental Policy Act that departments of transportation around the country began considering noise impacts as part of freeway projects. Since then, engineers have gone out and measured sound levels and the distance between the homes and speeding cars, and run them through sound projection models. Anytime a wall is projected to reduce at least 5 decibels of noise, it is likely to be constructed; exact noise reduction goals are typically between 7 and 9 decibels.

“MnDOT, like any other state, had to look at part of expansion type projects and study existing noise levels and future noise levels,” Peter Wasko, the Metro District Noise and Air Quality Supervisor for MnDOT, recently explained to me. “If they exceeded standards, then noise mitigation was analyzed and just like any other state then noise walls were proposed as part of that project.”

Modern sound walls are typically 20 feet tall, composed of posts buried somewhere between 12 feet and 15 feet into the ground, with wood slats between them. The oldest walls, dating back to the mid-70s, were made completely out of wood, but today’s MnDOT standard sound wall has concrete posts joined by brown painted wood designed to last over 40 years.

While they don’t meaningfully affect air pollution, noise walls reduce sound from 5 to 10 decibels (with 7-9 db the average target for the state agency). That said, noise reduction can vary a lot, depending the frequency of the vibration and the proximity of the affected homes. Analyzing exactly how it works can be devilishly tricky, and some people argue that MnDOT’s standard noise analysis model isn’t “fine grained” enough to account for neighborhoods close to freeways.

The case of the I-94 sound wall

You can find a great example of the difficult sound walls in Prospect Park, near the Eastern border of Minneapolis. When Robert Sykora built his house there five years ago, next to I-94 and Franklin Avenue, they tried everything they could think of to mitigate the ceaseless sound of cars. They filled the walls with a specific noise-deadening Icynene insulation, installed triple-pane windows, and thought carefully about how their yard related to incoming sound. Removing the sound of over 150,000 cars (I-94 traffic on an average day) was not easy, but when the house was finally finished, it seemed a successful attempt.

“When we finished our house in 2010 we could not hear the freeway at all,” Syokra told me. “Occasionally if a motorcycle went by, sure, but as general rule we slept like babies.”

That all changed when MnDOT decided to add a lane to the freeway through the area, which necessitated a new Environmental Impact Study and the construction of a sound wall on the freeway’s South Side. According to agency models, the new wall would reduce noise in the Prospect Park neighborhood. As it turned out, however, the new wall reflected a large amount of the sound back in the other direction, right toward Sykora’s house.

“We invested serious technology in our house, but it wasn’t soundproof any more,” Sykora explained to me. “All the sound was reflecting up into our house and our neighbors houses, particularly frustrating because we went to municipal consent hearings and told MnDOT guys if they put a wall there it would create a reflected noise problem.” 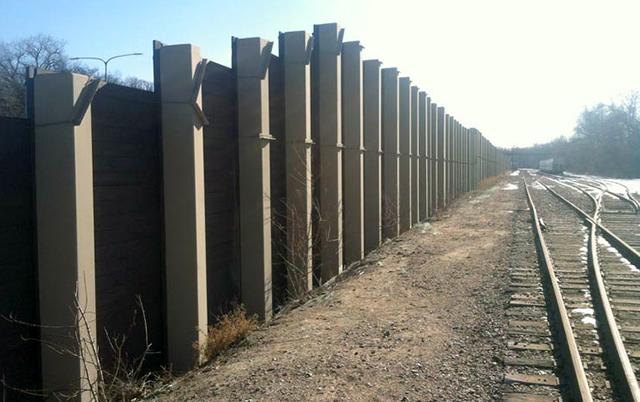 Thanks to pressure from the neighborhood and area politicians, MnDOT ran a more detailed analysis that confirmed Sykora’s suspicions. As a result, last year the agency redesigned the wall with special noise insulation made out of metal and mineral wool. And for Sykora, the results have been great; he grades the wall improvement an “A+” for noise reduction.

“In 16 years of doing this, I’ve found no other wall with that amount of reflection,” Peter Wasko told me. “Any wall is going to offer some amount of reflection, but typically the amount is so small it can’t be noticed. That was the only particular case we found where it was noticeable.”

Thanks to one final wrinkle, the redesigned wall is a visual landmark for drivers traveling between Minneapolis and St. Paul today. After a long negotiation with the neighborhood, MnDOT added aesthetic detail — a dozen paint colors in a “box-like” pattern, instead of the usual agency standard. (For the record, Sykora calls the original color “baby poop brown.”)

“As far as sound is concerned, it’s a happy ending,” Sykora told me. “But when neighbors start going out in their yards this summer, they’ll experience what the noise is really like. We notice dramatic improvement because we’re really close to freeway, but there are 221 other homes and people aren’t going to know until they open their windows in the spring.”

Many ways of looking at a blank wall

Artfully designed noise walls like the new I-94 example are the exception that proves the rule. (The other famous example is the transparent noise wall over Minnehaha Creek, part of the Highway 62 “crosstown” interchange project.) The rest of the noise walls – 90 percent of which are located in the Twin Cities metro – are relatively unadorned.

When you ask people about living with sound walls, you get a tremendous variety of answers. While people like Sykora have mixed feelings, others fight them vigorously; two years ago, urban activists in Minneapolis’ Marcy-Holmes successfully fought a sound wall installation. Meanwhile, people like Valentine Cadieux, a Geography professor living in Prospect Park, loves her adjacent sound wall because it feels like a “modernist edge to the city right in the middle of things.”

Sound walls can collect garbage, become a graffiti magnet, block out sunlight, and serve as a psychological boon or barrier. When compared to the overall impact of a freeway in an urban neighborhood, sound and sound walls can seem inconsequential. But if you live close to one, love or hate it, it’s hard to forget the looming presence of a 20-foot wall next door.