Especially since they’re designed to grab attention, it’s amazing how little most people notice urban billboards. They linger in the corners of our gaze, at the freeway periphery or perched on the rooftops of old buildings.

In fact, the only time most people seem to notice urban billboards is when something goes wrong; the notorious Chino Latino ads that push boundaries of good taste (probably intentionally) make great examples. Most of the time billboards blend into the bustle as just another fragment of the commercial kaleidoscope of the city.

The campaign to end billboards

For some folks, though, ridding the city of its billboards has become a lifelong quest. John Mannillo is a real-estate developer and longtime St. Paul activist. As chair of the group Scenic Saint Paul, he is one of the Don Quixotes of signage working diligently behind the scenes to undermine the ubiquitous structures.

“We believe billboards degrade the communities that they’re in,” Mannillo explained to me. “They give a very negative impression about what the neighborhood represents. You can see the correlation in stats: Where there are more billboards valuation on real estate is lower.”

Back in 1999, Scenic Saint Paul managed to get a citywide referendum on the ballot that would have gradually phased out billboards. It nearly passed, but fell short in a year with high turnout surrounding a stadium referendum. Despite the failed vote, however, Mannillo’s efforts have been reaping rewards.

“What we did achieve was that every Community Council decided to create their own sign district,” Mannillo explained. “And so over time we were able to get ordinances on the books that says billboards are non-conforming. That’s important because billboard companies lose money now on the old-fashioned signs. Labor costs are much more expensive than putting up digital billboards on the highway in higher traffic areas.”

According to Mannillo, cities should frown on billboards for a few key reasons. First, they devalue the buildings and neighborhoods around them, in a very literal sense. Manillo points to a 2011 study from Philadelphia that estimated that billboards reduce nearby property values by $30,000. On top of this, billboards do not generate any city revenue apart from an initial fee that hardly compensates for the long lifespan of the large signs.

Mannillo’s second problem with billboards centers on aesthetics. The theory is that billboards detract from the potential beauty of the city, and lead down a slippery slope of visual clutter.

“The ultimate goal is to eliminate signage that degrades the city and the visual environment,” Mannillo said. “You have so many signs that everybody feels they have to install a bigger, uglier sign. But it’s killing the golden goose, the visual character of the city. In the long run, we have to get rid of those.”

The case of the East Side billboard

But as is often the case, beauty can be in the eye of the beholder. The question of whether a billboard is a blight or an inspiration has become a hotly debated topic at St. Paul City Hall this week. The controversy centers on an old billboard on the East Side atop a city-owned building that is part of the now-mothballed Hamm’s Brewery. According to Council Member Dan Bostrom, who represents the area, the billboard in question retains the potential to be an asset to the community. 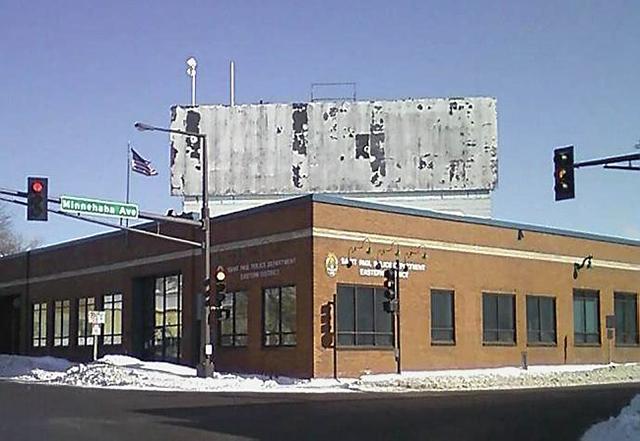 Photo by Sarah Geving
The controversy centers on an old billboard on the East Side perched on a city-owned building that is part of the now-mothballed Hamm’s Brewery.

“That billboard was part of the original Hamm’s brewery complex down there,” Bostrom told me this week. “When Hamm’s built that building, they built that billboard on top as an integral part. The board has been up there since the early ’50s, as far as I can tell. This is no substandard slapdash piece.”

After a long discussion and a close vote (4-3), the council decided to keep the billboard intact despite its currently tattered state. According to Bostrom, the plan is to raise private funding and commission community members to come up with ideas for how the sign might be used in positive ways.

“When you look at that and see the proposed rendering, to me it makes me feel good,” Bostrom told me. “It’s such a positive message. And the little scroll down at the bottom where it says ‘preparation plus opportunity equals success,’ that’s what it’s all about. Preparing young people for the opportunity that they might get some time in their life, that’s going to make them successful.”

Courtesy of Dan Bostrom’s office
A rendering shows a re-imagining of the billboard.

On Monday, however, Mayor Coleman weighed in on the matter, refusing to sign the council’s resolution. Instead, he’s looking to start a community process that will seek to balance historic concerns, signage potential and cost. The East Side billboard will remain a hot potato for some time.

As it turns out, the idea of using billboards to build community is nothing new. Jack Becker is the executive director of Forecast Public Art, a St. Paul group that advocates for and consults on public art around the country. According to Becker, billboards can offer compelling opportunities for artists to play with commercial conventions.

“The key thing for an artist thinking about using billboard space is to go beyond being an ad for your work,” Jack Becker told me this week. “Make it meaningful and resonate in some way in the location, so that it feels like it belongs there, reflecting something that’s in the community.”

For years, Forecast has been helping get lower rates for artists to use billboards, and begin to realize the public art potential of the signs. A great example popped up last year as part of Saint Paul’s Creative Enterprise Zone project, when photographer Alec Soth installed a huge photo above the Raymond and University neighborhood. The piece was a huge picture of clotheslines in winter, but according to Becker, the way that the lines blended with the poles and wires of the neighborhood made it a striking piece of public art. “Billboards are already there as a venue for ad space,” Becker continued. “A lot of artists interested in using billboards are showing that they don’t have to be about promoting a commercial product or service. By using the billboard, they are fighting the stereotype that they have to be for commercial use. Instead, we can make it for community use.”

A future without billboards?

But over the last decade, Mannillo’s plan to slowly eradicate billboards from St. Paul’s confines seems to be working. Back in 1999, there were 650 billboards scattered throughout the city. Thanks to sign ordinances, there are just over 400 today.

Next time you wander the city, start seeing billboards and thinking about how they affect the spatial environments around them. For my part, each time I see a billboard in a vacant lot, or dwarfing an old building in a rundown neighborhood, I ask myself what the corner might look like if the billboard weren’t there. It’s rarely difficult to imagine an improvement.