A freeway pedestrian bridge is probably the least pleasant place to spend time in today’s modern city. Often they’re narrow, utilitarian spaces surrounded by wire mesh cages, and every moment you’re perched inside, the exhaust and sound of cars flood your senses. They’re often covered in graffiti, and to many they seem like the epitome of urban dilapidation. It’s hard to imagine a less appealing setting.

But at the same time, these simple bridges can be the only link between neighborhoods that were cut in two by freeways generations ago. After decades of neglect, state agencies and community groups are starting to rethink how we design and build pedestrian bridges over our ubiquitous freeways.

The busiest ugly bridge in Minneapolis

The modern-day pedestrian bridge was born during the freeway construction era that began in the late 1950s. As with sound walls, planners at the time didn’t give much thought to how impassable freeways affected surrounding urban neighborhoods. Pedestrian bridges were almost an afterthought, spaced out about every half mile between street connections. In practice, these Spartan accommodations didn’t make up for the loss of connectivity experienced in neighborhoods that had previously been one walkable whole.

Of all the overlooked pedestrian bridges in the Twin Cities, the one that gets the most traffic is certainly the 5th Street bridge over I-35W in the Marcy-Holmes neighborhood. Here, the freeway runs right near the Dinkytown and University of Minnesota area, which for lots of demographic reasons is the city’s hotspot of foot and bike traffic.

“We have a community that is divided right down the middle by 35W,” Chris Lautenschlager, Marcy-Holmes’ communications director, told me this week. “That bridge is at least four decades old, and the width is not wide enough. If you’re a biker and end up going down to the sidewalk, you go right into the people that are walking by.”

The bridge itself, an 8-foot-wide design with a wide spiral on the west abutment, was built in 1971 during the construction of I-35W. While it’s in sound structural shape, it remains a dangerous choke point for students and neighbors trying to get safely around the neighborhood. According to the most recent Minneapolis count data, more than 1,100 bicyclists and 800-plus pedestrians cross at this point each day. (Compare that to the $5 million Martin Sabo Bridge over Hiawatha Avenue, which carries 2,700 bicyclists but only 240 pedestrians.) Each time a bicyclist speeds down the narrow spiraling walkway, it makes it a huge problem for anyone trying to cross the freeway on foot. 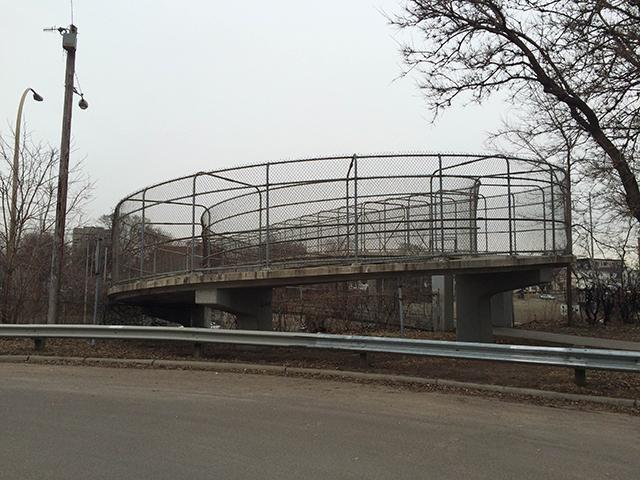 Courtesy of Chris Lautenschlager
Of all the overlooked pedestrian bridges in the Twin Cities, the one that gets the most traffic is certainly the 5th Street bridge over I-35W in the Marcy-Holmes neighborhood.

“We want the bridge to be ADA compliant,” Lautenschlager explained. “We don’t want it to be a purely utilitarian bridge, but the idea is that we want it to be a gateway to both the Marcy-Holmes community and the university. We want something that people notice, like the bridge connecting Loring Park to the [Walker] Sculpture Garden.”

In cooperation with the Minnesota Department of Transportation (MnDOT), the neighborhood has applied for money for a new bridge, which might cost around $3 million. [PDF]

“We have been working on trying to fix that bridge for over 10 years, maybe 20,” Sarah Linnes-Robinson, Kingfield’s executive director, explained to me. “It was an initiative that started back in the ’90s, a citizen idea and when we started organizing for that bikeway.”

“That bikeway” is the Riverlake Greenway, an east-west bicycle connection completed back in 2011. The greenway is one of the city’s new “bicycle boulevards,” intended to make bicycling safe for people of all ages to bike through South Minneapolis without fighting fast-moving car traffic. But as bicycling has become more mainstream, these pedestrian bridges have started to receive a lot more traffic and attention, and the 40th Street pedestrian bridge remains a choke point for getting people safely across the city.

“It’s a great asset to be able to get across the highway, but it’s very subpar for a bikeway,” Linnes-Robinson explained. “It’s hard to fit two bike handles going across from each other, and it’s a caged environment. The goal was to connect the other side of the freeway to Martin Luther King Jr. Park. There are lots of ways that the bridge could be expanded, and green space could be expanded, but it’s very superficial because the bridge is still part of the problem.”

Over the years, as they’ve struggled in vain to find funding for a replacement bridge, residents in the Kingfield neighborhood have tried lots of ideas for making the bridge a more welcoming and comfortable connection over the freeway. But no amount of art or community involvement can change the width of the narrow metal bridge. 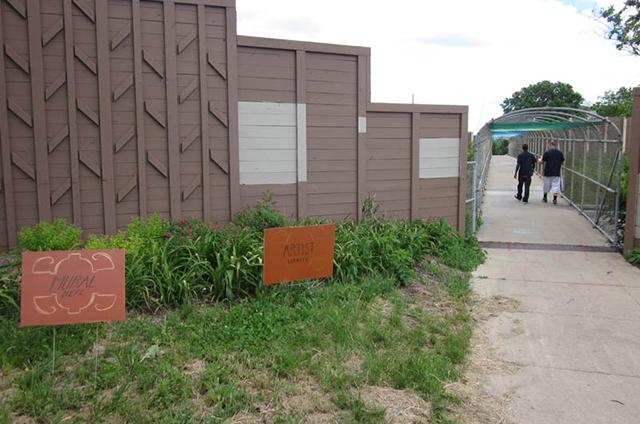 “Interstate 94 is a challenge, particularly in St. Paul,” Sheila Kauppi told me this week. Kauppi works as a bridge engineer, and is the North Metro area manager for MnDOT. Over the last five years, Kauppi and her agency have replaced many of St. Paul’s 1960s-era bridges over the freeway. For anyone walking or biking around the city, the difference is immediate.

“It’s an area where we’ve put a lot of infrastructure, and there’s definitely some historical association with it. Today there are new standards, so we look at things like what if there’s a person in a wheelchair and a person on a bike or a lady pushing a stroller, we need to make sure there’s enough room to pass.”

Pedestrian bridges are built to load requirements that can theoretically accommodate crowds of people up to 90 pounds per square foot.

Compared to the 1960s versions, modern bridges are at least 12’ wide (and larger for regional trails), lack an unsightly overhead “cage,” and are what the agency calls more “beefy.” In other words, they’re built to load requirements that can theoretically accommodate crowds of people up to 90 pounds per square foot (or a 20,000 pound truck driving on its own). At the same time, their connections are required to have ADA-standard curb cuts, for people with disabilities.

“We’re really trying to do things differently,” Kauppi told me. “In the past, we might have come in and said ‘we know we have to replace this bridge right here,’ but today I see us saying ‘we know we have a need, but let’s make sure it meets what the community wants and pit it in the right spot.’ That’s a big shift. That’s exciting for communities and exciting for us too.”