If you’ve driven a car for any meaningful length of time, you know the sinking feeling of police lights flashing in your rear-view mirror. It happened to me the other day, in Iowa of all places. I was lost in thought (pondering urban design), but not slowing down quickly enough while driving through a 25 mph small town.

That terrible clenching in the stomach, and the inevitable ticket dance, is probably why speed limits have long been the most visibly hated aspect of road design. Speed limits make people mad! But the more you study them, the more speed limits become devilishly complicated things. While speed limits on highways have become oddly democratic (I’ll explain how below), in cities it’s another story. For urban streets, because of an obscure and stubborn state law, Minnesota is falling behind an international trend toward lower speed limits that might finally be improving safety in cities.

The science of speed limits

For a long time, speed limits were misunderstood. Most people assumed that the limit guided people’s behavior, outside of a few lawbreakers who could be reined in by vigilant police. (Basically, it was a “Dukes of Hazard” scenario.)

That narrative really fell apart after the 1974 oil crisis led to a federal 55-mile-per-hour nationwide speed limit. During those years the highly unpopular “55” limit launched a host of studies about how speed limits can fail to improve safety, and repealing the limit became a cause célebrè for libertarian and automobile groups. When it was finally rescinded in the 1990s, it was because many traffic engineers concluded that speed differentials, not speed itself, made driving unsafe. (Differential means the difference between the highest- and lowest-speed vehicle on the road.)

The paradox of speed limits stems from the discrepancies among three engineering concepts: design speed, posted speed and operating speed. Posted speeds are most obvious: those signs you see on the side of the road, and that make you mad when you get pulled over. Design speed is the least obvious: It’s the (often vague) speed at which the road can be driven on safely in most conditions, a combination of pitch, curve, lane width, cross section and many other more fine-grained factors. Finally, the operating speed is how fast people actually drive. The goal of much highway engineering is to bring these three speeds into alignment.

The problem of speed limits is that people vote with their feet (especially the one connected to the gas pedal). Back in the days of the 55 limit, posted and operating speeds were horribly misaligned, so that, as one 1991 report put it:

Driver compliance with speed limits is poor. On average, 7 out of 10 motorists exceeded the posted speed in urban areas. Compliance tended to be worse on low-speed roads, better on roads with prima facie limits, or where the speed limit was based on an engineering study.

Basically, back then, almost everyone drove over the speed limit most all the time — which made for a dangerous situation, with arbitrary police enforcement. Since those days, things have improved, at least on highways. Now, most Departments of Transportation use a democratic approach to setting posted limits, aiming them at the 85th percentile operating speed. (i.e. the speed at which only 15 percent of people are driving faster.) In theory, these kinds of speed limits reflect people’s actual behavior. 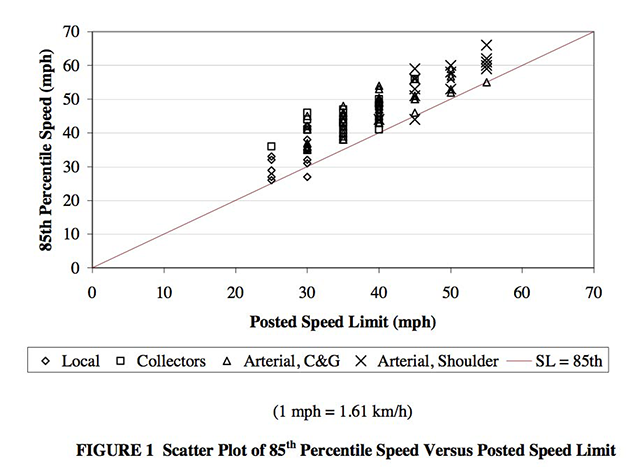 Source: Transportatoin Research Board
In a 1991 study, almost everyone drove over the speed limit most all the time.

On the rather hand, the new logic of speed limits starts to break down on urban streets. Because city streets have many intersections with stopped or very slow traffic, speed differentials (the root cause of crashes) only increase as speed goes up. Likewise, because of complex urban terrain, design speeds quickly change as parked cars, old buildings, curves or driveways enter the picture. 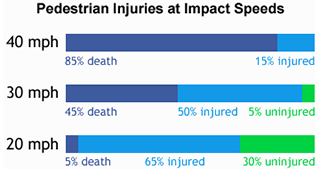 Pedestrians add the final wrinkle for urban speed limits. Due to a law of physics, the severity of crashes increases exponentially, not linearly, as speed goes up. Someone hit at 20 is far more likely to survive with minimal injuries than someone hit at 35.

The difference between freeways and cities is one of the main drivers behind the recent international trend toward lower urban speed. Places like Paris, Edinburgh and even New York City have begun reducing speed limits down to 20 or 25 miles per hour on city streets (unless posted otherwise). And despite complaints from lead-foot drivers and world-weary cops, early results suggest that it might be working. It invites the question of whether the same kind of thing is possible here in Minnesota, where the state-mandated lower boundary on speed limits is set at 30 miles per hour. 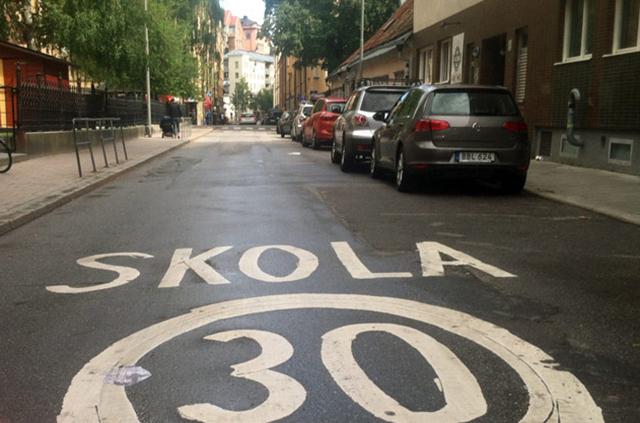 MinnPost photo by Bill Lindeke
The posted speed limit near a school in Stockholm is 30 kilometers per hour, or about 19 miles per hour.

Kathy Lantry is the head of Public Works for St. Paul, and a former City Council member from the city’s East Side. She’d like to see lower speed limits on many of the streets in her neighborhood, especially around schools.

“The No. 1 complaint as a council member was speed of traffic,” Lantry told me last week. “Over the years a desire by neighborhoods to reduce speed limits to 25 mph. The standard response is that to do that you have to change state law.”

Currently in Minnesota, cities that want to reduce speed limits below 30 miles per hour have to apply for permission from the state transportation agency. Unfortunately, it’s rarely granted because, as MnDOT explains in a thorough 2008 report, agency regulators are concerned that lower limits would be unenforceable and ineffective.

“Around a school, speed limits are the first line of defense,” Lantry told me. “The reason people have been opposed to it is because they think ‘nobody drives 30, so why would anyone drive 25?’ But maybe we might be able to reduce speeding just by lowering the limit. Maybe if the speed limit is 30, people drive 40. If it was 25, who knows? We have to inform the public about why driving the speed limit makes sense.”

It’s long been a kind of truism in the law-enforcement and highway-engineering communities that speed limits, by themselves, cannot solve traffic safety problems. Set them too low and people will increasingly begin to ignore them.

But in neighboring states like North Dakota, Wisconsin and Iowa (as I learned last month), cities and towns can set speed limits below 30. And for some people, especially those on foot or bicycle, it makes a difference. 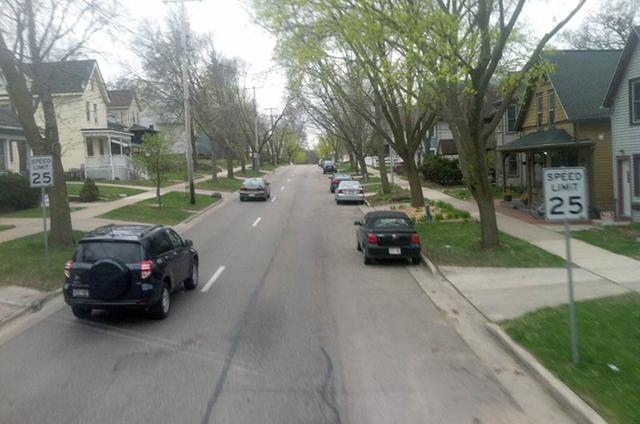 “It was quite obvious when I was riding around in Fargo (North Dakota) last year that the law is enforced,” Dorian Grilley, director of the Bike Alliance of Minnesota, told me. “People do drive slower, and it was really noticeable. Wisconsin and North Dakota have 25 mph community speed limits, and for consistency you’d like to see that in Minnesota, too.”

For the past few years, walking and biking advocacy groups have lobbied the state to change the law so that cities can decide their own speed limits, and lower them in certain urban areas. But so far, including this year, speed-limit deregulation has made little progress at the Capitol. Lawmakers often cite concerns about the inability to enforce existing laws, and you can be sure that the specter of the ’70s-era “55” debacle lingers in the air.

But as more and more cities around the world and the country begin to experiment with lower speed limits, eventually Minnesota might have to begin looking at making city streets places where cars drive more slowly, and people feel more comfortable crossing walking around urban neighborhoods. Until then, as your mother surely told you, be sure to look both ways before crossing the street.

The limits and promise of speed limits