Monday was a big sports day on TV. The Twins played their first game, the Wild had a chance to clinch a berth in the playoffs, and the NCAA men’s basketball championship went down, featuring the locally hated Badgers against nationally hated Duke. But in Merlin’s Rest pub, nobody noticed. Instead, people were drinking and eating and talking with each other, doing anachronistic things like making eye contact and holding their food with both hands.

Merlin’s Rest, an 8-year-old pub on Minneapolis’ East Lake Street founded by British expats, is part of the quiet trend of bars without TVs. Increasingly these days, you can find places carefully curated to provide oases within our media-soaked city. And while each of these bars has unique reasons for eschewing the screen, they share a belief that there’s something almost sacred about crafting conviviality.

The science of screens

In 1985, Joshua Meyrowitz wrote “No Sense of Place,” one of the definite works on how TV screens shape space. Meyrowitz’s key idea was that television (and all live media, to some extent) changes our everyday “situational geography” by doubling our sense of presence. While we watch TV we almost exist in two places at the same time: at the bar staring up at the screen, and at the game itself, which might be dozens or thousands of miles away. For a long time, this kind of dual presence was seen as eroding our traditional sense of place, coming at the expense of qualities like neighborliness.

But at the same time televisions foster comity around the screen itself. For example, think of a group of friends meeting up to watching a World Cup soccer match. In her book “Ambient Television,” the media scholar Anna McCarthy describes this kind of double effect as a “capillary-like action” that creates community. She writes:

“Spectacles on overhead screens both symbolically join spaces together in long-distance communication and fragment the social atmosphere of their immediate environments. … The paradoxical effect of the multiscreen apparatus is to anchor us in place, making us unable to take off.”

But as screens have proliferated, and particularly with the omnipresence of hyper-mobile smartphones, many of our “third places” (like coffee shops, restaurants, bars and libraries) seem more fragmented than ever. It’s easy to understand why some people might want places to escape from screens.

Craft beer but no TVs at Republic

Going “TV free” isn’t just the provenance of nostalgic Brits. There are a few other places scattered around the Twin Cities that share Merlin’s predilection for unmediated conversation. And the trend seems to be accelerating with the increasing interest in craft beers and cocktails, where connoisseurs spend more time appreciating things like flavor and complexity. When Matty O’Reilly bought the old Sgt. Preston’s bar on Cedar and Washington, one of the first things he did was to remove the dozen large TVs. 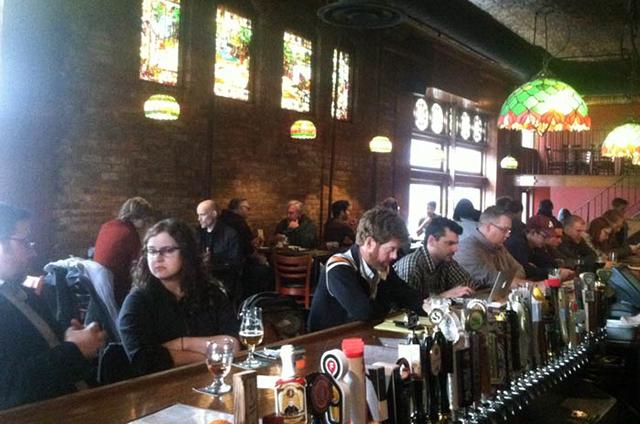 MinnPost photo by Bill Lindeke
While Republic does miss out during big sporting events, they more than make up the difference with steady customers who appreciate the food and great beer selection.

“We were on the fence about it at first,” O’Reilly told me this week. “We inherited a beautiful bar filled with stained glass, brick and wood. It seemed like the TVs distracted people from the natural look of the room.”

While Republic does miss out during big sporting events, they more than make up the difference with steady customers who appreciate the food and great beer selection. According to O’Reilly, Republic boasts about three times the sales volume as the sports bar before it.

“I feel all of us are surrounded by and addicted to screens and quick access to information,” O’Reilly said. “I personally think there should be more spaces where you can just sit and talk and eat without distraction. I guess we’re happy with our decision.”

MinnPost photo by Bill Lindeke
“We inherited a beautiful bar filled with stained glass, brick and wood. It seemed like the TVs distracted people from the natural look of the room.”

Across town in downtown St. Paul, Jon Oulman shares O’Reilly’s animosity to the boob tube. Inside the misleadingly cavernous Amsterdam Bar and Hall on Wabasha and 6th street, there’s not a television in sight. (Indeed, when I went there to watch the Dutch world cup matches, they were shown via portable projector.)

“Digital Underground called television the drug of the nation,” Oulman told me, “These days, even when you put fuel in your vehicle, there’s a television screen screaming at you.”

Instead of televised sports, Oulman’s bars focus on events like trivia, live music, and even a “drinking spelling bee.” (Confession: I tried it once, and failed in the very first round. The pitfall was “khaki.”)

“I realize for a lot of guys it’s hard to have anything to talk about unless they‘re talking about men wearing matching uniforms and getting physical,” Oulman said, smiling. “But I think people tend to interact with each other more when they don’t have a television to stare up at. People find things to talk about.”

It seems places like Merlin’s Rest appeal both to our nostalgic past and to our technologically saturated future. When Lee Tomlin and Bill Watkins designed Merlin’s, they explicitly tried to recreate the British pubs that they remembered as kids.

Tomlin recalled his local pub in Hartfordshire, with its lively mix of patrons. “There were no TVs in that pub; that’s what its all about,” he said. “A British pub is a community center; it just facilitates great conversation.”

According to Tomlin, when Merlin’s Rest first opened, the TV repairman came in from his shop across the street and sat down next to the rug cleaner from two blocks away. They ended up meeting each other and chatting for the first time, despite years of working on the same street.

These days the TV repairman might be out of business, but TVs are more common than ever. Except in a few small pockets of Minneapolis and St. Paul, where you can still find places where “everybody knows your name,” but nobody knows the score of the game.

The rise of TV-free bars in the Twin Cities