“I grew up using streetcar back in the 40s, so it’s nothing new to me,” Jim Daily told me this week.

Daily’s parents started letting him take the University Avenue streetcar when he was 10 years old, heading to downtown Minneapolis for a movie at one of the big Hennepin Avenue theaters. And today, it seems like history is repeating itself, because Jim Daily is taking the train up and down University Avenue on his way from the Episcopal Homes, a large housing complex for seniors next to the Green Line.

“You have no stairs to climb; it’s faster,” said Daily, who has been an independent resident at the Homes for years. “They keep adding user-friendly signs to the walkways so that people are getting used to crossing at the lights.”

The Episcopal Homes has a long, quirky history, sitting at the edge of St. Paul’s Midway. But partly by coincidence and partly by design, the complex is on a leading edge of providing senior housing close to urban transit. Millennials might be getting all the press, but the “back to the city” movement for the Twin Cities’ oldest citizens might be more important.

The story of the Episcopal Homes site is as old as the streetcars themselves, dating back to the 1880s and the era of settlement houses, orphanages and moralistic urban reformers. As outlined in Dave Kenny’s short book (available for purchase in the Episcopal Homes gift shop),  housing for elderly Episcopalians traces back to the charity work of a missionary woman named Annette Relf, who came to Minnesota via Kentucky and Missouri to provide assistance to the poor. After working for orphanages and church homes, she started a home especially for elderly women. (Before Social Security, senior citizens were commonly the poorest people in society.) 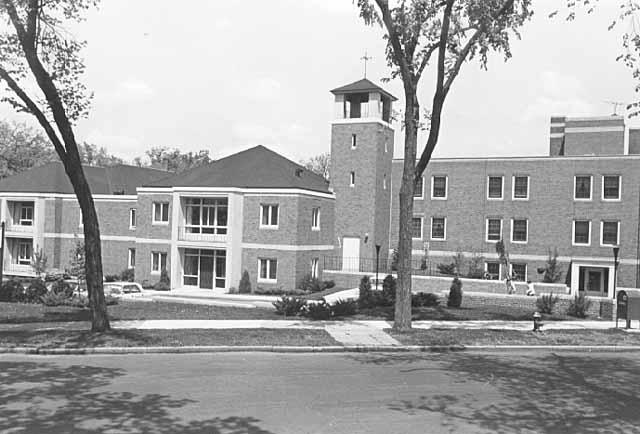 Courtesy of the Minnesota Historical Society
The Episcopal Homes in 1965.

The Episcopal Homes began with strict rules about behavior, only accepting women of “good character” who were not “mentally and physically helpless,” and gradually evolved throughout the 20th century, thanks to charitable giving by the Twin Cities’ faithful.

On their current site tucked around Iris Park (itself an odd relic of the Victorian age), the Episcopal Homes dates back to the 1920s. After World War II it expanded by building new housing and buying property. During the last few decades, the Homes constructed larger developments along University Avenue itself, on the site of a former car dealership and the famous Porky’s drive-in.

Still, since the 1960s the position of older residents in the middle of St. Paul remained somewhat awkward. During the ’70s and ’80s, University Avenue wasn’t always seen as a great place to be. As economic stagnation peaked, from an architectural standpoint, the Homes tended to de-emphasize its position along the city’s main drag. (For example, there were lingering disputes around trash from the weekly car shows and outdoor burger culture of Porky’s, the city’s last real ’50s-era drive-in.)

But those tensions have begun to dissipate now that the light rail train is up and running.

“The biggest surprise of all was the impact we had on the broader neighborhood,” said Marvin Plakut, then head of the Episcopal Homes, back when the first expansion along University was built. “We had no idea we would help convince people that University Avenue was a place not in decline, but on the upswing.”

With the construction boom after the Green Line’s construction, the transformation of University Avenue from a strip of faded car dealerships and empty parking lots into a walkable street filled with housing has only accelerated.

Challenges of light rail for seniors

If you read their literature, you get the feeling that Episcopal Homes has experienced an about-face, and its position in the middle of the city has become a feature and not a bug. Homes’ brochures explain that “ ‘urban’ means connected,” and tout the “easy access to all the best that Saint Paul and Minneapolis have to offer.” 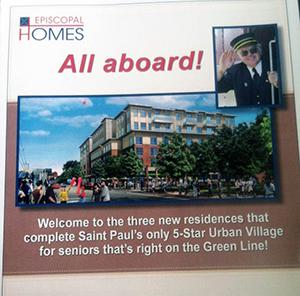 A brochure for the Episcopal Homes emphasizes rail connection

“Residents love it,” Nicole Zauhar, marketing associate for the Homes, told me when I stopped by the site for a visit. ”It’s about half and half; some are kind of scared about whether the light rail is distracting or if it’s too busy, those types of concerns. But you have the other half that are excited about it, and they are intentionally moving here to be near it.”

Episcopal Homes is a great test case for the potential of light rail to change behavior in the Twin Cities. The Fairview Green Line stop couldn’t be closer or more convenient to the hundreds of people living in the buildings. But that doesn’t mean that it’s not a challenge.

After having a few conversations with residents, I see that taking the train can still be intimidating for many older folks. There are lots of questions — How do I get a “Go Card”? How far do I have to walk to the reach the store? Will I be harassed on the train? — that make the Green Line a bit out of reach, even if the stop is right out the door.

“Well, I see it out there, and it looks handy, but I have not done it, I’m sorry to say,” Dusty Mairs told me this week.

Mairs has been living at Episcopal Homes for only a few months, but she is a life-long Episcopalian who sits on the board of the Homes organization. While she loves her new place along University Avenue, Mairs has taken the train only once so far (to visit a friend in Downtown Minneapolis).

“Everyone talks about it; it’s a topic of conversation,” Mairs told me. “I’m not so much worried about ice on the street as worried about ending up having too far to walk. And it would be nice if they would sell those little passes at more places. I only know about getting them at Cub and downtown, so for older people they don’t want to wander around looking for them.”

Mairs, who drives her car most of the time, is looking forward to using the Green Line more often, for example to visit her dentist downtown. But for many of the residents at the Homes, the light rail is still more of an idea than an everyday reality.

The many commonalities of millennials and retirees

If you spend most of your day online, it might seem like the “millennial generation” is some sort of bizarre cultural aberration. But the trends that are showing up in surveys of young people aren’t that ridiculous. Much like millennials, seniors are looking to reduce driving, walk more, and increase choices in their neighborhood. For example, after moving to the Episcopal Homes, Jim Daily got rid of his car.

“Because of my financial situation it was easy for me to decide that I could put a couple thousand dollars a year to better use,” Daily, who has lived at Episcopal Homes for over two years, told me. “And I’m glad I did that. It was one of the reasons I chose Episcopal Homes, to know that I could take the Green Line.”

Daily’s desire for easy access to his barber and dentist downtown, or his physician by the University, seems awfully familiar in an age of catering to “the creative class.” For older drivers, in particular, there can be a delicate balance between wanting to maintain mobility and freedom of driving in our auto-centric city, and legitimate safety issues about driving with diminished eyesight and reflexes. As anyone who’s taken care of older folks probably knows, “taking the keys away” can be a horrible thing to have to do.

To me, creating “transit-oriented housing” for seniors seems like a real opportunity. As the Twin Cities ages, maybe the Episcopal Homes is a sign of things to come.

Senior living on the Green Line: a sign of things to come?