It’s strange that old urban industrial neighborhoods have become romantic places. Fifty years ago, if you said “industrial” to a stranger on the street, they’d conjure up an image of giant brick buildings belching pollution, noise and stench.

But things are changing. In older U.S. cities, urban industrial property is often scattered in close proximity to dense residential and commercial uses, built before zoning codes sorted out our cities. For a long time that close proximity meant conflict over quality of life and business concerns, and cities looked to separate industrial users from their neighbors. These days, though, some urban industrial land has become a hot commodity, and planners and developers are looking for ways to elegantly mix uses in ways that haven’t been seen since the 19th century.

While the rebirth of urban industrial land represents a sea change, it can be difficult to separate the hype from the reality around how technologies like broadband or 3D printing might change manufacturing. Last December, the St. Paul Planning Commission (of which I’m a member) held a retreat aimed at understanding trends in urban industrial land, and separating the science fiction from the materiality of current reality.

“3D printing is reducing the barrier to entry for industrial design,” Jay Demma told the commission at the retreat. Demma is a geographer and planner for Perkins & Will, which does consulting on industrial development. Demma points to how 20th-century trends that led to decentralization of industrial land might be reversing.

“Before, if you came up with an idea for a product, you had to have the financial backing to bring that design to an industrial scale,” Jay Demma explained. “That’s a huge barrier. But this technology gets rid of a lot of those barriers, so that manufacturing can happen at a vastly different scale than what happened historically.”

According to Demma’s narrative, 19th-century industrial uses required access to energy sources like water power, space-consuming rail transportation, and large pools of manual labor. That meant dense and dirty urban neighborhoods like downtown Minneapolis’ industrial riverfront. But by the mid-20th century, disbursed freeway networks, containerization, automation and the horizontal layout of factories changed the picture. For most industries, suitable property could only be found on the suburban fringe.

These days, manufacturing has become cleaner while cultural interest in small-scale, local sourcing and things like the MAKER movement are changing expectations. At the same time, well-educated labor forces are looking for more amenity-rich (read: walkable) workplace environments.

“In St. Paul, the West Midway provides an interesting example,” Jon Commers explained. “There’s a pressure from a range of market types, with interests in the same physical space.”

Like many people doing planning for St. Paul, Commers, an urban consultant who sits on the Metropolitan Council, would like to see an approach where industrial uses can work out ways to share space with other, more recent demands on older mixed-use properties.

“Sidewalk priority is a relatively specific strategy,” Commers explained to the commission. “But it’s an interesting example of how a relatively modest capital budget can create a ‘both-and’ approach [balancing industrial and mixed-use needs]. Strengthening access for people to move around is an important priority, because missing sidewalk segments really inhibits the variety of uses you can embrace in those areas.” 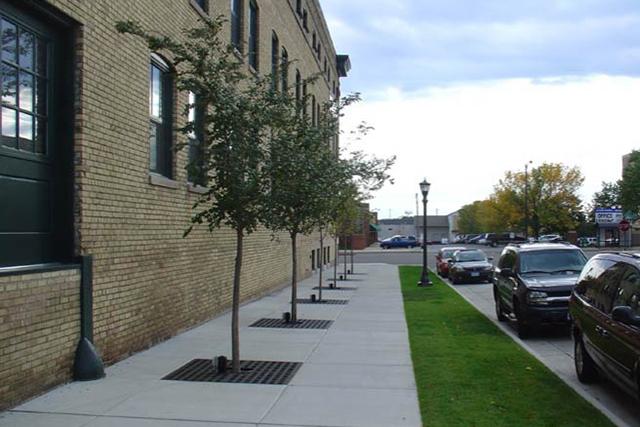 Courtesy of the City of St. Paul
St. Paul is adding sidewalks to parts of Midway that have never had sidewalks before.

The needs of industry

But like it or not, industrial land users still have different needs from urban buildings designed for residential housing or commercial uses like restaurants or retail.

“What’s not changing in the industrial world is that buildings still have to have adequate employee parking,” David Stokes, an industrial property broker for DTZ realty, explained to the commission.

“Industrial buildings have to have more fulfillment activities in them,” Stokes said. “They need adequate truck access, truck courts and dock doors. It’s really the basic infrastructure that supports these kinds of buildings, and the businesses and employees that want to be in them.”

According to Stokes, there are two basic kinds of urban industrial properties: “re-positionings,” where long-lasting materials like brick and old-growth timber make buildings ripe for re-use as trendy mixed-use redevelopment, and new construction, which often requires vast amounts of space.

And compared to even 10 years ago, new buildings are getting much larger, which means that most new industrial properties are being built in exurban areas like Rogers, Otsego, or across the border in Wisconsin.

“Years ago, 18 foot clear height was modern,” Stokes told the group. “That moved up to 24 feet, then 32, and now some buildings are going to 40 feet; it’s all about cubic volume. And 10 years ago, a big building was 240K square feet, but nowadays buildings are 400K and 800K square feet, more than twice as big. With these changes you need bigger sites.”

From factories to creative districts

While today’s ultralarge-scale industrial development doesn’t really have a place in urban centers, there are certainly many other kinds of industrial users that want to locate in the central urban core. One big driver is that industrial uses are very complex, and represent a wide spectrum of needs.

“If you meet with a city of and talk about doing industrial development, in their mind you get smokestacks and grease and things burning,” Stokes explained. “But industrial can be a data center, heavy industrial, a cross dock, warehouse storage manufacturing, medical tech, clean rooms, light assembly, fulfillment; it can be back office data or it can be office service or flux space.”

Each new type of industrial use requires different spatial, transportation and architectural particularities. But the key question is: Which of them should cities like Minneapolis and St. Paul try to attract? For many planners, the answer isn’t a “silver bullet” of one big industry, but rather creating “districts” that bring together ensembles of smaller compatible industrial activities.

For example, St. Paul adopted an industrial plan for the West Midway industrial area that attempts to balance older and newer conceptions of industrial property. One of the big ideas is a “Creative enterprise zone” centered at the Raymond Avenue Green Line station.

“Industrial land has to go to district level,” Jay Demma explained, “with innovators, highly trained and skilled folks [working] in urban environment for a reason. It’s about amenity of experience and place, not just workshop but in neighborhoods around them. You don’t need a high level of urban amenity everywhere, but there need to be key points within these districts where there’s something of interest.”

Can everything be a brewery?

Inevitably, when people start talking about reusing industrial buildings, or the future of DIY industrial entrepreneurialism, they point to a brewery. In old industrial buildings, breweries like Indeed and 612 (in Minneapolis), or Urban Growler and Flat Earth (in St. Paul), seem like a great way to re-use and revitalize mothballed factories, and the ethos of local craftsmanship that percolates through craft beer culture epitomizes the economic goals of many city planners.

Despite the trendy new brewery-proximate buildings like St. Paul’s “Vandalia Tower” or the creative developments in Northeast Minneapolis, for much of the core cities, industrial land still involves a tradeoff between industrial business and residential concerns. Will industrial land be able to make the leap forward into a mixed-use, DIY future, or stay fixed on warehousing and logistics? 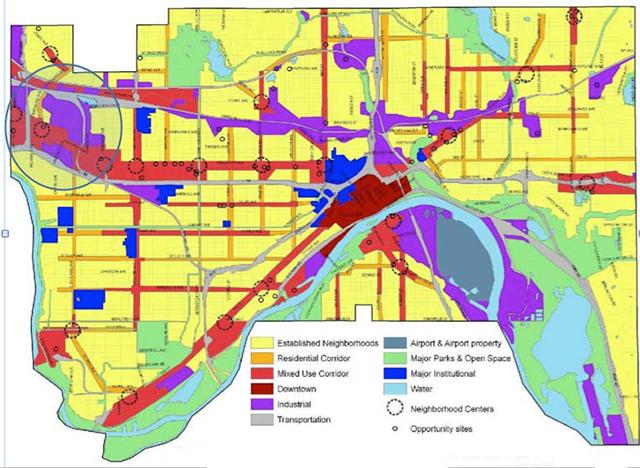 Courtesy of the City of St. Paul
The location of St. Paul’s Midway, circled on the map above, made it ideal for industrial uses.

Much of the time, a building designed around easy truck access is not going to be good for parents pushing a stroller, and cities need to remain clear about their zoning priorities. The fact remains that core industrial areas like St. Paul’s Midway are often ideal logistical locations, located next to a plethora of freeways, and remain attractive to businesses like self-storage facilities or warehousing that don’t do much to increase “creative vitality.”

Whether industrial land in St. Paul will be able to make the leap forward into a mixed-use, DIY future, or stay fixed on warehousing and logistics remains an open question. From one perspective, there’s a big difference between an urban industrial neighborhood being a convenient piece of land for a trucking facility, and a walkable space for industrial entrepreneurs. But for other city planners, balancing old and new industry remains a compelling vision.

The future of urban industrial land: separating fantasy from reality