If you scoured every university in America, you couldn’t have found a more qualified panel of urban health experts than the one gathered on the dais Tuesday at Metropolitan State University: Dr. Richard Jackson, former public health director at the CDC, Dr. Anthony Iton, a California public health expert, Anna Muessig, an urban designer for Gehl Architects, Katherine Correia, director of the HealthEast medical system, and Dr. Edward Ehlinger, the Minnesota health commissioner.

The panel gathered to discuss how to improve urban public health in the Twin Cities, and after St. Paul Mayor Chris Coleman introduced them they had a riveting discussion on solving our region’s health inequities.

Despite the gathering of expertise, the talk — part of a weeklong “residency” of programming on urban design — illuminated the complexity of solving urban health problems. Despite good intentions and the best in medical technology, inequalities around life expectancy and health have only gotten worse in the Twin Cities. The million-dollar question: What can we do about it?

In public health, everything is connected

“Health is political,” Dr. Iton argued during his keynote, suggesting that public health is about how we divvy up scarce resources like parks and sidewalks. Driving home the point with a slew of data from cities all across the country, Iton outlined how dramatically neighborhood environments can make a difference in people’s lives. 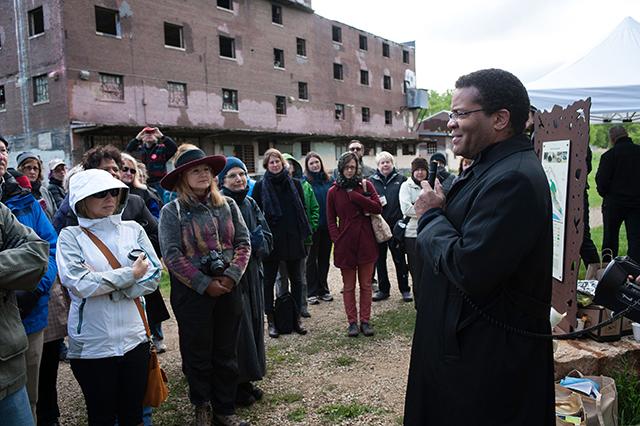 “Genes are relatively irrelevant when it comes to the health status of populations,” Dr. Iton explained. “Instead, most health status has a lot to do with the communities where people live and the choices they have available to them. Eighty percent of what influences your life expectancy happens outside of the medical system, and that’s a conservative estimate.” 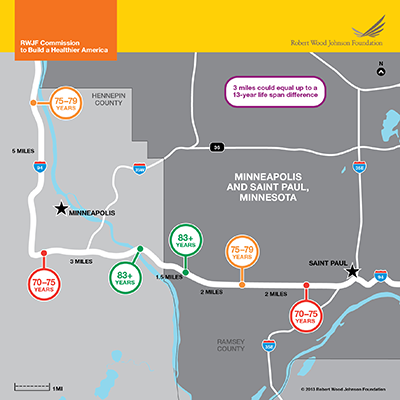 Courtesy of the Robert Wood Johnson Foundation
A difference of only 3 miles can make up to a 13-year difference in life expectancy.

The focus on race and class disparities has been a hot topic in city halls, foundation meetings, and planning departments all through the Twin Cities, and this week’s residency programs are aimed squarely at the Twin Cities’ equity problem. For example, last year the Robert Wood Johnson foundation released a report that showed dramatic differences across the “urban spectrum” of Minneapolis and St. Paul. (A similar study [PDF] from Blue Cross/Blue Shield comes to the same conclusion.)

“But when we see health disparities, are we seeing the whole story?” Dr. Iton asked the audience. “We’re trying to build a framework for understanding how to analyze these problems. What we have is a narrative of exclusion, but we need a narrative of equity.”

Elegantly summing up the complex logics of public health is a nearly impossible task, and Iton’s half-hour talk did as well as anyone can possibly hope to do. But the root of the problem is that access to healthy, low-stress living in the Twin Cities is very disproportionate. Wealthy neighborhoods and suburban enclaves offer many amenities, while poor communities (mostly in the urban core) have minimal access to healthy food, jobs, transportation, and safe places to play.

What is to be done for cities?

Probably the most interesting part of Tuesday’s panel discussion came when Dr. Iton asked people whether they were surprised by the difference in health outcomes. Looking out over the audience, only a few hands went up. But explaining the root causes of inequality, and figuring out what to do about them, remains a difficult challenge.

This week’s Placemaking Residency — a weeklong series of workshops spread out across the metro area — tries hard to connect urban health with urban design, by offering walking tours that connect public health with things like street design, park access, and ideas for community engagement.

“150 years ago cities were awful places to live,” Patrick Seeb told me this week. Seeb is the director of the Saint Paul Riverfront Corporation, which has taken the lead on organizing the residency program for the last four years.

“Architects and public health officials founded what we think of as urban design today, leading to sanitation systems, clean water, pollution standards, and a profound change in human health,” Seeb explained. “Today, we’re facing a different urgent health crisis, with obesity, heart disease, asthma, and a bunch of disorders that are the result of automobile-based policies in city planning. Today’s kids can’t walk or bike to school.” 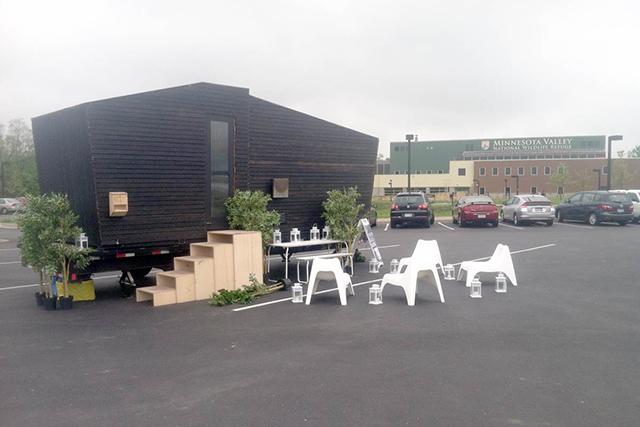 MinnPost photo by Bill Lindeke
A portable sauna in a parking lot outside the Minnesota Valley National Wildlife Refuge in Bloomington.

For this week’s residency, the solution hinges on design. As part of the team, Seeb and his partners have brought in a pair of urban designers from Gehl Arhitects. (Jan Gehl is a famous urban planner from Denmark, who visited the Twin Cities back in 2007. At the time, he recommended to MinnPost that Minneapolis get rid of the downtown skyway system.)

So far this week, Gehl designers Blaine Merker and Anna Muessig have been conducting placemaking and design workshops aimed at making streets more walkable in places like “downtown” Bloomington and St. Paul’s East Side.

The suggestions will be familiar to anyone who’s been paying attention to urban design discussion over the years: better sidewalks, bike lanes, good public parks, and much less space for speeding cars. On top of that, the consultants have recommended that cities begin measuring social interactions in public spaces, counting activities like sitting, walking, talking, or biking through our city streets. The hope is that good statistics will help cities better make decisions that actually shift people’s behavior.

What happens when the experts leave?

The placemaking residency program has been going on in St. Paul for four years now, and results are starting to show up in city policy. (I’ve had the pleasure of attending three of them.)

“Today, St. Paul has a $42M capital investment program called the ‘8-80 Vitality fund,’ ” Seeb told me when I asked about the goal of the residency project. “We’ve accelerated the completion of the bike plan and it received unanimous support from the City Council. There’s a direct relationship to inspiration we got [last year] from Gil.”

But actually following through after the consultants fly away is more difficult. Now that St. Paul has approved its citywide bike plan, the city is proposing three new bike lanes that would run for miles along key routes through the city, including Lexington Parkway, Cleveland Avenue, and Front Avenue.

So far, public input has been a mixed bag, with bike advocates praising the plan but local businesses complaining about the loss of parking spaces. The proposed bike lanes are headed to the City Council for recommendation (as part of county-funded road work). A city decision on the bike lanes is expected next month.

Talking about a healthy city is certainly nice, but the true test will come when road construction begins this summer.